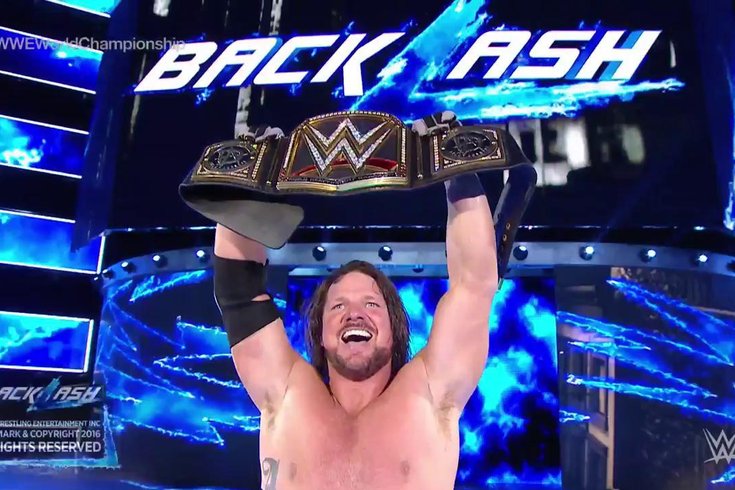 The Coliseum in Richmond, Va. was the host for the first SmackDown-only pay-per-view in nine years on Sunday night. The card heading into Sunday night felt a little underwhelming, but there was no chance the superstars competing in the ring were going to let the crowd feel that way. The Six-Pack Women’s Challenge set the tone and the show actually winded up being one of the best of the year.

I’ve said that about a lot of the shows WWE has put on this year, but I can’t remember a really bad pay-per-view. WrestleMania 32 might actually have been the worst of the year so far.

Before the show, however, WWE paid tribute to those lost in the Sept. 11 terrorist attacks 15 years ago.

Here’s what went down in Richmond on Sunday night:

On the Kickoff Preshow, Apollo Crews and SmackDown general manager Daniel Bryan were talking backstage when Baron Corbin approached both of them. He basically shunned Crews off as a nobody, which led to Bryan booking a match between the two for the Preshow.

I didn’t think Corbin had a chance of winning as I usually take the faces to go over in the Preshow matches, but I was pleasantly surprised they haven’t dropped the ball with Corbin … yet. For Crews, I’m not sure what they’ll have for him down the road, but he deserves a push soon. Very soon. Same with Corbin.

But Tuesday night, this match probably won’t matter. And that’s the problem. Corbin would get the win after hitting Crews with the End of Days.

Becky Lynch vs. Nikki Bella vs. Naomi vs. Carmella vs. Natalya vs. Alexa Bliss

This was the first-ever Six-Pack Challenge match to feature women, so there was already a lot of pressure on each of these superstars to deliver in the ring.

And they absolutely did.

It was a great match that had time to breathe, likely because there were only six matches booked on the main card, but the eliminations came fast and furious.

There was no fear as Naomi jumped onto a crowd outside the ring from the top rope and a few superstars worked together to perform high-risk maneuvers off the ropes. Alexa Bliss was the first to be eliminated after being pinned by Naomi, but the former Funkadactyl tapped to Natalya’s Sharpshooter soon after.

Nikki Bella and Carmella renewed their personal rivalry after Natalya was eliminated by Bella, and Carmella got the last laugh after rolling up Bella to eliminate her after she pinned Natalya.

I actually thought WWE was going to put the title on Carmella for a split-second, but that wasn’t the case. Lynch eliminated Carmella by submission via the Dis-Arm-Her to become the first-ever SmackDown Women’s Champion. And she deserves every bit of it.

Charlotte and Lynch are now the two women’s champions in WWE. That’s golden.

The Usos vs. Hype Bros.

This was a pretty good match, but I didn’t think there was any chance Mojo Rawley and Zack Ryder could have won, and that proved to be true. I loved Rawley during this match and he had some really good spots, but it wasn’t enough to land the Hype Bros. a spot into the tournament final.

Recreating what they did to the leg of Chad Gable last Tuesday on SmackDown, Jimmy and Jey popped Ryder’s knee up really good and then locked him in a half crab.

Ryder had no choice but to tap, and the Usos landed in the SmackDown Tag Team Championship Final.

Your winners: The Usos

Before the match, the Intercontinental Champion and the general manager were talking backstage, and Miz said he wanted to renegotiate his contract because SmackDown needs him. I guess he figures they can’t go on without him, despite having the WWE World Championship, Tag Team Championship and Women’s Championship.

On the Kickoff Preshow, Booker T, Lita and Jerry Lawler all picked against Ziggler, so I naturally thought he probably had a legitimate chance to become the new Intercontinental Champion.

The Miz and Ziggler were given plenty of time and the match turned out to be a lot better than probably anyone expected. Ziggler looked to have the match won numerous times, but Miz kicked out just in time to preserve his championship reign.

In the perfect heel move, Maryse sprayed something into Ziggler’s eyes late in the match, allowing Miz to capitalize with the Skull Crushing Finale and retain his championship.

The build for the Randy Orton-Bray Wyatt match has been pretty good the last few weeks. So, it was kind of a bummer when we found out Orton hadn’t been cleared to compete after taking those nasty head shots from Brock Lesnar at SummerSlam in August. So WWE ran an angle where Wyatt attacked Orton backstage, injuring his left ankle and not allowing him to compete in storyline because of that.

So while I guess Wyatt technically defeated Orton due to forfeit, I’m not sure if that’ll be recorded in the history books that way. For me, I don’t view it that way. In fact, Wyatt had to face Kane in a No Holds Barred Match, which I actually called spot on early Sunday afternoon.

Pretty sure we'll wind up getting Kane vs. Wyatt

Now, if you’re tracing this storyline, the ending makes sense. It’s been said again and again by countless people – wins and losses in WWE do not matter. This was actually a really good match by the low standards we should have set for it going in, and Wyatt running across the announce tables with a senton bomb onto Kane was pretty great.

The leg was good enough for an #RKO from @RandyOrton! #WWEBacklash pic.twitter.com/UStK9xm3Ps

Orton, selling his ankle injury, hobbled out to the ring and wound up hitting the RKO on Wyatt, all legal because it was No Holds Barred. Kane hit the chokeslam on Wyatt and pinned him for the win.

If this leads to Wyatt getting the upper hand in the feud and getting the win when Orton is cleared by doctors, then I’ll feel a little bit better about all of this. But, when’s the last time Wyatt won an important match? We have to go all the way back to July’s Battleground pay-per-view when the Wyatt Family defeated The New Day days before they were split up on different brands.

The Usos vs. Heath Slater and Rhyno

With the Usos now full-fledged heels, I thought there was a new opportunity for the tag team to win the new SmackDown Tag Team Championships and feud with American Alpha over them once Gable is “healed” from his injury.

But what happened Sunday night I would’ve taken as well.

The long road to a WWE contract for Heath Slater is over. In a pretty good match against the Usos, Slater and Rhyno were able to win the tag team championships and become the first-ever SmackDown Tag Team Champions. With Slater laid out by a superkick, Rhyno was able to hit the Gore on Jimmy Uso and Slater slowly but surely slid over to pin him for the three.

I’m looking forward to seeing how this plays out on Tuesday night.

I said I wasn’t going to predict AJ Styles winning a WWE Championship anymore until I saw it with my own eyes.

Sunday night, I saw it with my own eyes.

In a fantastic main event that capped off a very good pay-per-view, AJ Styles became the new WWE World Champion, and the face of SmackDown. While the entire match was very good, the ending sequence was one of pure perfection. We saw near falls galore and Ambrose nearly killing Styles, who bounced right back up and gave Ambrose all he could handle.

Styles reached deep into his underhanded tricks sleeve, noticing the referee was shaken up after he countered a Dirty Deeds attempt by pushing Ambrose into him, and then nailed the champion with a low blow. If you’ll remember, he did the same thing last Tuesday at the end of SmackDown.

Styles would hit the Styles Clash to reign victorious as the new WWE World Champion.

WWE is bringing SmackDown to Philly on Tuesday night, so I’ll be in attendance to see Styles’ first appearance in WWE as a world champion. What a time to be alive, indeed.

Let’s also tip our cap to Mauro Ranallo, who had a fantastic night on commentary and made every moment seem that much more important. It was a great night all around.

The next SmackDown pay-per-view comes to us on October 9 when WWE presents No Mercy from the brand spanking new Golden 1 Center – which hasn’t even opened yet – in Sacramento, Calif.

Stay tuned here at PhillyVoice for my Raw roundup on Tuesday morning followed by the SmackDown rundown on Wednesday morning.