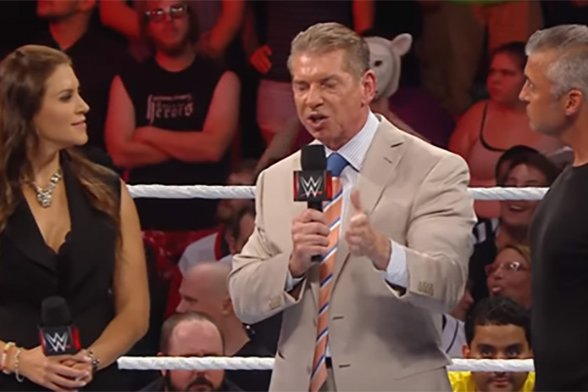 Vince McMahon made his return to television Monday night and named the new commissioners for Raw and SmackDown.

Live from the Joe Louis Arena in Detroit on Monday night, Raw was on fire as the push for the WWE Draft next Tuesday really began and things started taking shape. The commissioners for Raw and SmackDown for when the brand extension begins were announced as was a ahuge match for next week’s Raw.

Brock Lesnar is also coming off one of the biggest fights of his career, and WWE wasted no time in showing his UFC 200 highlights on Raw Monday night in the first hour of the show. However, meither Lesnar nor Paul Heyman were anywhere to be found on the show. Maybe next week? We can only hope.

The new leader of SmackDown Live is…

Vince McMahon showed up in the middle of the program and announced that he would name a new COO of SmackDown Live (I think they’re going to refer to it as SmackDown Live for a few months to hammer the point home that it’s live each week, and I don’t blame them for doing so), then changed his tune and said he’d name a new commissioner of SmackDown.

That got the entire Internet talking. The likes of former commissioners like Sgt. Slaughter, Shawn Michaels, Mick Foley, William Regal and even former general managers like Paul Heyman and Eric Bischoff were all brought up as possible returns to head SmackDown when it goes live next Tuesday.

In the main event of the evening, WWE’s owner gave us all an answer to that question. No, it wasn’t a huge surprise return or anything like that. Shane will indeed run SmackDown, and Stephanie will run Raw. However, they’ll both have to appoint their own general managers to take care of the “company’s” day-to-day operations as they handle everything else.

It’s an added layer we didn’t see in the first brand extension, so I’m interested in seeing where it goes. Next Monday, Shane and Stephanie are supposed to appoint their own GMs or the owner will do it himself. This leads me to believe after the first few weeks or months, Shane and Stephanie won’t be permanent fixtures on their respective shows each week. And that’s okay.

Too many authority figures? We’ll see. It sure sounds like a lot, but I’m always willing to see where the story goes and if this leads to something better. Maybe the return of Eric Bischoff? Maybe someone else we never thought we’d see in WWE again? It’s got me interested.

SHANE: Game ON!
STEPH: There's only ONE GAME in this business... and I'm MARRIED to him! #RAW pic.twitter.com/cSo29Gs0yb

After the announcement, the two siblings had a few words for each other, complete with a slap to Shane’s face by Stephanie.

The Rollins Report and Ambrose’s promo of a lifetime

Seth Rollins got to the bottom of Roman Reigns’ suspension with the inaugural edition of The Rollins Report, which was just a montage of different Reigns interviews as Rollins asked pre-recorded questions. It was obviously made to look as fake an interview as it was, and was actually pretty entertaining. And it got even better.

The WWE Champion, Dean Ambrose, made his way to the ring and confronted Rollins in what might be the best promo of his WWE career. His emotion was palpable and it wasn’t the sarcastic, good-natured Lunatic Fringe. Ambrose said Rollins, Reigns, Vince McMahon himself and anyone else would have to pry the championship from his cold, dead hands. Rollins was clearly shaken by Ambrose’s words and sold it perfectly.

Ambrose challenged Rollins – who wanted a one-on-one title match at Battleground – any time, any place. It looked like they were gonna get it on in Detroit, but Rollins retreated. The match was made official for next Monday night on Raw live from the Dunkin’ Donuts Center in Providence, R.I. So, the day before the draft on the first live episode on SmackDown, we’re gonna see a WWE Championship match headline Raw. I’d say that’s a pretty big deal.

The New Day meet the Wyatts on their own turf

In what was obviously inspired by TNA’s Final Deletion match from last Tuesday’s episode of Impact Wrestling between Matt and Jeff Hardy, WWE aired a confrontation between the WWE World Tag Team Champions and the Wyatt Family on Monday night. It was billed as “The Fight at the Compound” that took place over the weekend.

It was… different. Certainly different than what we usually see on WWE television each week. But part of the beauty of Final Deletion last Tuesday was how ridiculous it was. This was more serious in tone and a legit brawl between two sides, and it didn’t really hit the viewer the same was Final Deletion did. There was a lot of social media negativity stemming from the segment, and I can’t necessarily blame anyone.

It wasn’t my cup of tea, but it wasn’t terrible, either. People in sheep masks came out of the darkness and New Day wound up retreating after a vicious brawl. I’m sure this isn’t the end between these two teams.

Owens and Zayn really hate each other

Before Kevin Owens’ match against Cesaro, Sami Zayn came out to provide some color commentary at the announcing table. Owens wasn’t having any of that and actually had Zayn’s “clearance from Shane McMahon” revoked by Stephanie McMahon and Zayn was escorted backstage before the match. Of course, Owens made his entrance while Zayn was walking backstage and the two got into a small brawl before being separated.

Owens won his match against Cesaro with a swinging neckbreaker, which was odd considering it ended the match, but it might be a new move in Owens’ repertoire as we move forward. We’ll see. After the match, Zayn attacked Owens outside the ring.

The Club with a shoutout to one of the NBA’s greatest, Allen Iverson

During a backstage segment, AJ Styles and The Club made fun of John Cena for not being at Raw due to his rehearsing – and practicing – for the ESPYS that he’ll be hosting on Wednesday night. And in their jovial ribbing of Cena, they also paid a sort of tribute to one of Philly’s greats, Allen Iverson.

But Cena is unlike any other and he chartered a private flight from Los Angeles to Detroit and came out to save Enzo and Cass from a beating about two-plus hours into the show. The place came unglued.

Some may dislike Cena, but the man deserves everyone’s respect.

• Sasha Banks defeated Dana Brooke by submission using the Bank Statement, and then Charlotte booked another match between the two for SmackDown on Thursday night. If Banks can beat Brooke again, then maybe Charlotte will give her a shot at her Women’s Championship.

• Zack Ryder and Rusev will fight at Battleground for the United States Championship after Rusev accepted his challenge. Sheamus defeated Ryder with a Brogue Kick before Rusev came out and clamped The Accolade on him.

• Darren Young is great again!? Bob Backlund’s protégé won a 20-man battle royal to determine the No. 1 contender for the WWE Intercontinental Championship at Battleground. Young and The Miz will battle it out on July 24th.

• Darren Young won a No. 1 Contender’s Battle Royal for the WWE Intercontinental Championship.

• Sheamus d. Zack Ryder by pinfall via the Brogue Kick. Rusev attacked Ryder after the match and accepted his challenge for a match at Battleground.

• Breezango d. Lucha Dragons by pinfall after Tyler Breeze hit Kalisto with a superkick while he was on the middle rope and slammed him to the mat powerbomb-style for the win.

• Kevin Owens d. Cesaro by pinfall via a swinging neckbreaker. Zayn attacked Owens after the match.

• Titus O’Neil d. Heath Slater by pinfall via the Clash of the Titus.