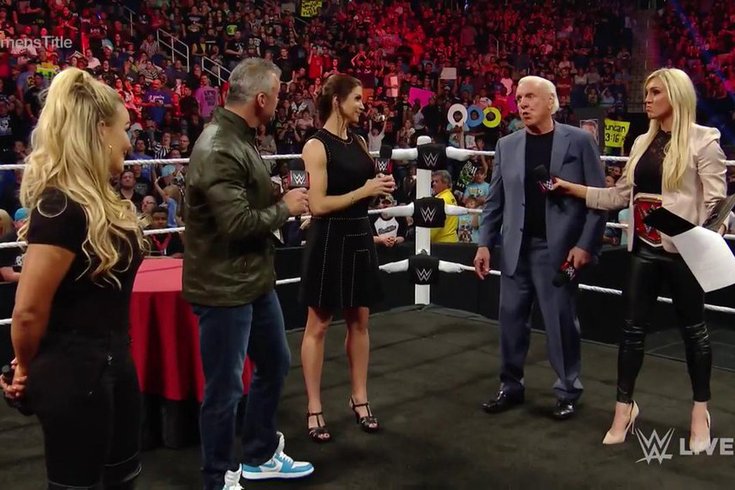 Six days away from Sunday’s Extreme Rules pay-per-view, WWE brought Raw to the Greensboro Coliseum in Greensboro, N.C. It was the final time for the main storylines to be on display in front of a big audience, and the angles played really well in advance of Sunday’s event. Every angle had a purpose and built to a match, so nobody can argue it was a show that didn’t mean anything.

My Extreme Rules preview will be posted later this week, so stay tuned.

The show began with a promo from AJ Styles, who said he didn’t need anybody’s help to get where he is in his career. While people may think he can’t win the WWE World Heavyweight Championship without the help of his friends, Karl Anderson and Luke Gallows, Styles was adamant that he’s done it on his own before and he can do it this Sunday once again.

Roman Reigns’ music hit and the WWE World Heavyweight Champion came out. The verbal jousting continued before Karl Anderson and Luke Gallows came out, but Reigns had The Usos by his side, who presumably came from the crowd. Or under the ring.

Later in the night, The Usos would face Anderson and Gallows again in tag team action, and would get the win with a big splash off the top rope. The two factions would brawl, but Styles would eventually get the upper hand and nail Reigns with a chair multiple times before ending him with a Styles Clash onto the chair.

Charlotte and Natalya sign the contract for Extreme Rules

The women got the main event spotlight for a contract signing once again – the first being Charlotte and Paige months ago – as the Women’s Champion Charlotte and Natalya are set to clash yet again this Sunday at Extreme Rules in a Submission Match. An added stipulation in the match is Ric Flair being banned from ringside and if he does come down, his daughter will be stripped of the WWE Women’s Championship.

That didn’t sit well with Flair, as he almost came to blows with Shane, but it was Stephanie would would slap The Nature Boy right across his face and off his feet. Security then came out for him as Charlotte made a beeline for Stephanie but she ran right into a Sharpshooter by Natalya.

Ambrose and Jericho will enter the asylum

It just seemed too convenient that Dean Ambrose and Chris Jericho hadn’t been confirmed for a match against each other at Extreme Rules heading into Monday night, and we’d see some sort of angle to make that match official for Sunday. And we did.

Ambrose called out Jericho, who obliged him, and challenged him to an Asylum Match – basically a steel cage match with an added layer above that held all the tools of their rivalry. Straight jacket? Check. Mitch? Check. Barbed wire baseball bat? Check.

One would think Jericho wouldn’t agree to such a match, but Ambrose said Shane had told him he could pick any kind of match he wanted, so there’s that. I guess Jericho’s just got to deal with it.

I was hoping we were going to get a classic Cesaro vs. Sami Zayn match because that’s what was advertised, but of course, WWE has to go and ruin it. The WWE Intercontinental Champion, The Miz, along with his wife Maryse, joined the commentary table before the match, as did Kevin Owens. But before the match could really get going, Miz and Owens start fighting with each other and Miz gets tossed into the ring and all of a sudden, all four participants in Sunday’s Fatal Four Way match at Extreme Rules were brawling in the ring. Alas, a Cesaro vs. Zayn classic was not meant to be.

However, we did get a tag team match featuring the four thanks to Shane and Stephanie McMahon. Shane wanted to bore everyone to death and book the same tag team match we saw on SmackDown last Thursday, but Stephanie wanted to spice things up, and she certainly did. Owens and Zayn were on one side and Cesaro and Miz were on the other to make this tag team match a little more interesting.

Zayn got the win for his team with the Helluva Kick, but Owens attacked him after the match to send a message that [hopefully] he’d be the next Intercontinental Champion.

New Day goes back in time

The WWE World Tag Team Champions went back in time Monday night. They first landed in 2009, where Kofi Kingston wanted to stay because it was the best year of his career. They then landed in the time of wherever The Vaudevillains appear to be from and began making fun of them only as New Day can do. However, the challengers to the WWE World Tag Team Championships this Sunday didn’t find it funny and attacked the champions from behind and destroyed their time machine, and the crowd wasn’t happy at all. It might’ve been the loudest the Vaudevillains were booed in their careers.

• Cesaro vs. Sami Zayn ended in a No Contest after The Miz and Kevin Owens got involved.

• Sami Zayn/Kevin Owens d. Cesaro/Miz by pinfall after Zayn hit Miz with the Helluva Kick and then pinned him. Owens attacked Zayn after the match.

• Dana Brooke d. Becky Lynch by pinfall via a sunset flip counter into a pin.

• Tyler Breeze/Fandango d. The Golden Truth by pinfall after R-Truth accidentally hit Goldust with a heel kick in the head and Breeze got the pin.

• The Usos d. Anderson/Gallows by pinfall after Jey hit Anderson with a big splash. Both factions fought after the match.