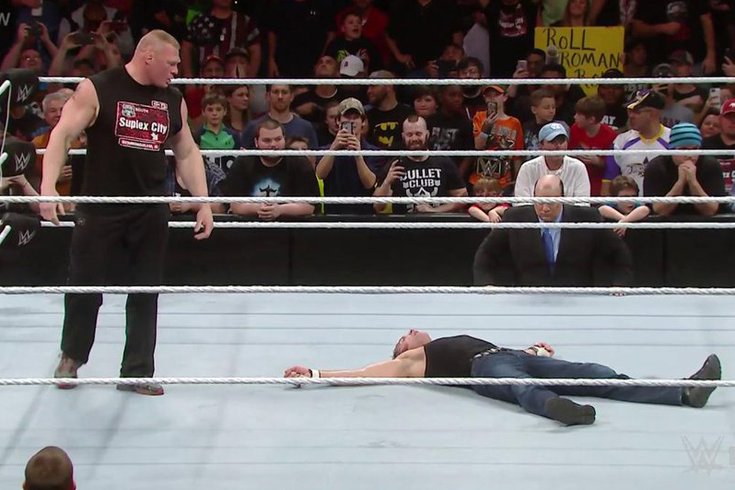 The Legacy Arena in Birmingham, Ala., hosted Raw on Monday night as we prepare for Fastlane in three weeks. The main event of that pay-per-view will feature a Triple Threat Match pitting the Beast Incarnate, Brock Lesnar, against former Shield members Roman Reigns and Dean Ambrose for a chance to face Triple H for the WWE World Heavyweight Championship at WrestleMania 32 in April.

The main event for WrestleMania already seems like it’s set in stone, but WWE can always change its mind, so I’m not counting any chickens before they hatch as so many others like to do.

Before we hit Raw, some unfortunate news surfaced earlier Monday as Bret Hart announced he’s fighting prostate cancer. Hart will undergo surgery this week in hopes it’s early enough to combat and overcome. My thoughts and prayers are with the Hitman.

The Beast Incarnate, along with Paul Heyman, opened Raw with a fairly predictable promo: Lesnar’s gonna beat Reigns and Ambrose at Fastlane and send them to Suplex City – you know, the usual. But it never, ever gets old when Heyman’s the one cutting the promo. It’s always a masterpiece.

Ambrose would come out and confront Lesnar, and it seemed like the Beast Incarnate was taken aback by the gumption of the Lunatic Fringe. Ambrose told Lesnar to take him to Suplex City and then left after saying he just wanted to see what the fuss was all about.

I have to admit, that might have been the best Ambrose promo in a while. No fear and no intimidation shown by him. Lesnar laughing it off made it even better, as if he couldn’t believe what Ambrose was doing.

Before the main event, the WWE World Tag Team Champions had something to say, which is nothing new. And it was awesome, which is also nothing new.

I guess Ambrose got what he wanted.

AJ Styles was a guest on Miz TV on Monday night, but he didn’t really have a lot to say. The reason for that, actually, was because The Miz would tease letting Styles talk on the mic, just to take it away and talk on the mic himself.

The Miz even name-dropped fan favorite, Daniel Bryan, who we haven’t seen in almost a year after he suffered a severe concussion last spring. Miz talked about mentoring Bryan when Bryan first came into WWE, and says he can do the same for Styles. The crowd then turned on Miz and set him off on a rant that didn’t really seem to have a point.

Eventually, Styles got fed up and beat Miz down before he was able to slide away and back up the ramp. This will lead to a match between the two this Thursday night on SmackDown.

Later on in the program, Chris Jericho was interviewed backstage and he said he would be paying close attention to what transpires on SmackDown regarding Styles and Miz. Could there be a Fastlane match in the future for Styles and Jericho?

Brie Bella netted a win over the Divas Champion, Charlotte, after reversing a Figure Eight leglock attempt into a small package. We’ll probably see Brie get a Divas Championship match based off this outcome, but don’t look for the title to change hands anytime soon.

Sasha Banks and Becky Lynch sounds like a dream women’s match on paper, but this match was more particularly used to get Banks away from Tamina and Naomi and completely dissipate Team B.A.D. I’m not sure if we have to suffer through Banks vs. Naomi and Tamina now for a couple months before WrestleMania, but I’m hoping Banks gets her time to shine at the biggest event of the year in April.

Kevin Owens and Dolph Ziggler once again squared off in a pretty good match that really didn’t mean anything. Why couldn’t this have been for the No. 1 contendership for the Intercontinental Championship? Something. Anything. But, alas, this match was basically for nothing. Which is probably why Ziggler pulled off the victory.

The Wyatt Family destroyed Big Show after he defeated Erick Rowan in a match. Despite the absence of Bray Wyatt, the leader of the cult, the Wyatts left Show lying after the match. Hopefully we’ve seen the last of him for a while. No offense, of course.

WWE is celebrating Black History Month once again by showing video packages of their best African-American wrestlers in history. This week, Mark Henry had the honors.

• The Usos vs. Curtis Axel and Adam Rose by pinfall via a Jimmy Uso splash off the top rope onto Rose.

• Big Show d. Erick Rowan by pinfall via a chokeslam. The Wyatt Family destroyed Show after the match.

• Titus O’Neil d. Tyler Breeze by pinfall via Clash of the Titus.

• Sasha Banks d. Becky Lynch by disqualification after Tamina and Naomi attacked Banks outside the ring during the match.