WWE Raw roundup: Reigns overcomes the odds … and this feels so familiar 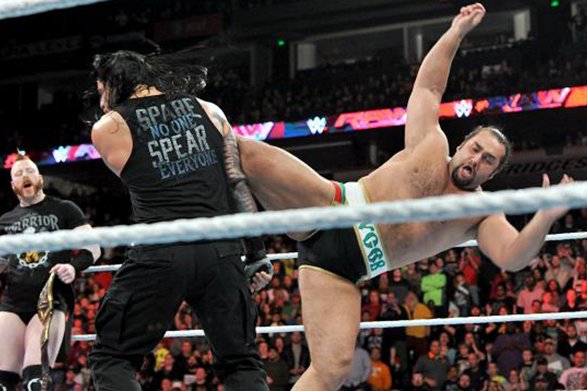 Roman Reigns demanded a rematch against Sheamus on Monday night, moments before Rusev returned to take him out.

One day removed from WWE’s version of the Fall Classic, the crew hightailed it from Atlanta, Ga. to Nashville, Tenn., to bring us Raw from the Bridgestone Arena. No Jeff Jarretts here, but there was a great segment that basically made fun of country music and could probably be in the running for segment of the year.

After Sheamus took home the championship Sunday night, many wondered how WWE would move forward beginning on Monday. Would Reigns have to wait for his chance in the Royal Rumble match? That answer was made evident in the opening promo of the show.

The Authority opened up the show, and we’re back to the cookie cutter opening that’s made Raw feel so stale and lame for a long, long time. Triple H and Stephanie McMahon would bring out the new WWE World Heavyweight Champion, Sheamus, and give him some time on the mic.

While the crowd chanted, “You look stupid!” at the new champion, he basked in the glory of the spotlight and raised the title belt high, taunting the crowd with a, “Who looks stupid now!?” chant of his own. Reigns’ music would hit and he would come down to the ring through the crowd and basically demand his rematch then and there. Of course, The Authority wouldn’t let that happen, and Rusev would make his return and attack Reigns to set up the night’s main event.

Before going to a commercial, Stephanie made sure to mention Sheamus would defend his newly won title against Reigns at the TLC pay-per-view in three weeks in a TLC match.

I always thought feuds should be blown off with a TLC match, not starting with one. It’ll be interesting to see how they build a Reigns-Sheamus match with little to no heat to work off of with only three weeks to spare.

As for the main event, Reigns and Rusev had a pretty good match before King Barrett interfered. He got a chair, but Reigns made it back to his feet and grabbed it first, laying out Rusev and Sheamus with a few chair shots and stood tall to end the program.

The New Day was on absolute fire Monday night. From their antics down the aisle, to in the ring, to Kofi Kingston’s unicorn braid and Big E’s cowboy hat, everything about this segment was absolutely spectacular. I don’t think there’s been a better segment these three guys have been involved in during their careers. Honestly, this was better than all of Kingston’s Royal Rumble moments of avoiding elimination in the craziest ways possible combined.

In his State of MexAmerica address, Zeb Colter and Alberto Del Rio officially announced their charity work to help the people was terminated, effective immediately. How rude!

Luckily, Jack Swagger came out to save the day and challenged Del Rio, who backed down. Swagger had a brief feud with Rusev last year, which was actually a really good one. The whole USA/Russia angle was hot for two guys that weren’t mainstays at that point. I don’t mind seeing how this angle with Swagger and Del Rio plays out.

In a nice little wrinkle from the Divas Championship match at Survivor Series, Paige had some video footage of Charlotte “cheating” to retain her title on Sunday night as her right arm was under the ring ropes when Paige tapped out to the Figure Eight. Even if this wasn’t the case, the two would have had a rematch anyway, and their rematch would occur on Monday night.

The match would end in a double countout, so this definitely isn’t the last we’ve seen of these two.

Ryback and Heath Slater participated in what was probably the most underrated segment of the night.

Another Sasha Banks-Becky Lynch match, another Banks win. Why aren’t these two involved in the title picture right now?

I guess we’re just going to forget about the Wyatts losing to The Undertaker and Kane on Sunday night?

• Bray Wyatt and Luke Harper d. The Dudley Boyz by pinfall via a clothesline from Harper on Bubba Ray.

• Sasha Banks d. Becky Lynch by pinfall via a rollup after Lynch was distracted from Naomi and Tamina on the outside.

• Neville d. Mark Henry by pinfall via the Red Arrow.

• Goldust and The Prime Time Players d. Stardust and The Ascension by pinfall via the Clash of the Titus on Viktor.

• Divas Championship: Charlotte (c) vs. Paige ended in a double countout. Charlotte and Paige brawled outside after the match, and Paige locked in the PTO on Charlotte on the announce table.