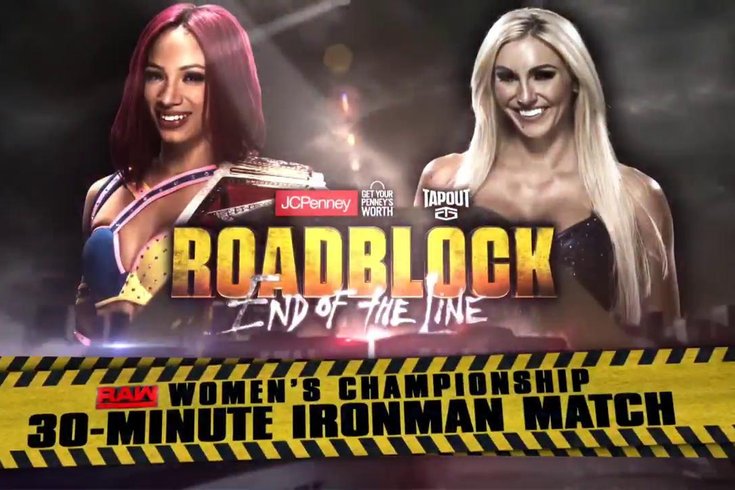 For the second time this year, WWE will present a pay-per-view with the title, “Roadblock” etched into the name. However, this Sunday night’s pay-per-view live from the PPG Paints Arena in Pittsburgh will be a little bit different than last March’s WWE Network special before WrestleMania.

Roadblock: End of the Line will be a Raw-brand exclusive event and features some new matches, where the tagline, “End of the Line,” almost doesn’t make sense.

However, we’re likely to see the end of the Sasha Banks-Charlotte Flair feud play out, so for that match, the tagline fits. Of course, we all thought the end of their feud would be at October’s Hell in a Cell pay-per-view, but, alas, it wasn’t.

Here’s what I think will go down in Pittsburgh on Sunday night:

Will we see an appearance from Enzo Amore Sunday night? Maybe. But this entire Amore-Rusev “feud” has already left me wanting both parties to move on already. It’s not particularly good, and Rusev being involved in another love angle is an insult to how much talent he truly has. He could be a monster gunning through the entire Raw roster, and could even be WWE Universal Champion at some point. He’s that good.

And, some might not like to hear it, but he deserves a push more than most, if not all, on the main roster right now. Amore and Cass are the most over team right now, and they’ll eventually grab the Raw Tag Team Titles. But the time for Rusev is now. Maybe 2017 will be his year. But WWE has to stop putting him in these ridiculous storylines that do nothing for him.

Unfortunately, I just see this as a way for Cass to avenge Rusev’s attack on his partner a few weeks ago.

He may not be trading @iLikeSamiZayn to #SDLive for @natalieevamarie... but is @RealMickFoley giving Zayn the match he wants?! #RAW pic.twitter.com/RPIptzY8QS

This match is now more interesting than it ever had a reason to be. Strowman has improved in the ring, so a match against Zayn should only make him look better, right?

Zayn and Raw general manager Mick Foley was played up to the point that Foley was going to trade Zayn to SmackDown for Eva Marie. The fire in Zayn was lit and Foley told him to channel that fire and anger into his match with Strowman.

Zayn doesn’t even have to beat Strowman.

He just has to last 10 minutes with the big guy to, I guess, win. I’m more interested in this match than I was before, and I think it has a lot to do with the chemistry between Zayn and Foley. I’ll take Zayn here.

Ah, the Cruiserweight Division. The biggest letdown in WWE of 2016. There’s already been three champions since September, and everything that made the Cruiserweight Classic great this past summer has been stripped down and made into a main roster WWE product that continually lets the fans down.

Swann is awesome, Perkins is good, too, and Kendrick works more outside of the Cruiserweight Division with his current gimmick. With the influx of talent and the new WWE Network show, “205 Live,” that airs every Tuesday night after SmackDown, the division has been given so many things to do to succeed. But it just hasn’t connected with the audience yet.

Sure, the purple ropes and printed ring aprons are aesthetically pleasing, but when is this division going to step up and become must-watch television? Is this match the beginning of that? Hopefully. I’ll take the champion to retain.

The crowd cheers Cesaro, semi-cheers but mostly boos Sheamus, and they’re still over. They just work.

However, that’s not a reason to throw the tag titles on them right now. If that’s the end game - which shouldn’t be considering Enzo and Cass should be the next champions - then they need to hold off on a switch until New Day makes more history. Having them lose on Sunday wouldn’t make much sense.

I picture New Day losing the titles after consistent battles within the group and Big E eventually turning heel. That’s how I envision it and that’s how it should be done. It’s not nearly the time to do that yet. New Day will retain the titles.

Chris Jericho continues to reinvent himself in 2016, and it’s been nothing short of spectacular. The List of Jericho and “It!” are so simple, but so effective. If anyone could have had that gimmick on Raw, it might not have worked. Jericho pretty much makes everything work.

This match isn’t exactly for anything, but it should be a really good one. Jericho seemingly turned on Kevin Owens this past Monday on Raw, but nobody can know for sure in pro wrestling. Will Jericho and Owens be best friends forever after Roadblock ends? It’s possible. I don’t expect Owens to get involved here even though he seems to be wanting to get back on Jericho’s good side.

Rollins gets the win with a Pedigree.

I’m almost afraid to pick the champion to win this one, because all signs point to a possible Jericho/Owens feud, and why would that feud be for the WWE Universal Championship? It shouldn’t be. WWE has had some random pairings before, but if Reigns win the title on Sunday night, who would he face next?

It’s all a big mess at this point.

Rollins is more concerned about Owens and vice versa, but he also wants Triple H. Will Rollins get involved somehow? Jericho? It’ll be interesting to see how the match is booked, but I really hope it’s not some overdone, crazy type of finish where we’ll question anything and everything about it. Owens should win here, but I just have a feeling Reigns could easily win the title back because nobody is exactly expecting it.

But, I’m not going with my gut on this one. Owens will win.

In all honesty, this match should be the main event of Roadblock on Sunday. Banks and Flair main evented one pay-per-view and two Raws, so there’s no reason to think this match doesn’t end Roadblock: End of the Line. With that tagline, it’s the match that makes the most sense to go on last.

I’m not sure if it will, but it absolutely should.

WWE has done everything in its power to make this feud one of the best women’s feuds of not just the last few months, but one of the best women’s feuds in wrestling lore period. I think a few years down the road, we’ll really appreciate how many matches these two have had. With both women being three-time champions, it’s about time for them to let Banks take the reigns and be the face of the women’s division on Raw for a while. I’m not sure what they’ll do with Bayley at this point, but a feud with Charlotte even without the title would do wonders for her on the main roster. She really needs something to boost her.

As for Banks, there can be a multitude of lower card women’s wrestlers to challenge her. Nia Jax, Alicia Fox, and a returning Emmalina are just a few.

I’m excited to see how this match ends. It’s supposed to be the final match in the feud, so it has to end with a bang. And it’d be a great way to end the pay-per-view with Banks standing tall with the title. The match may not go on last - even though it should - but the pay-per-view ending with Banks holding her title high in the air would be a fantastic way to close out 2016. And that’s what I’m hopeful for.

And, no, I have no idea why it’s referred to as an Iron Man match instead of Iron Woman.

The last pay-per-view of 2016 is pretty loaded. It should be an excellent show, as most pay-per-view events have been since the brand extension. The Banks-Flair feud has carried Raw for the last few months, so it should close out the show on Sunday night.

The rest of the card looks awesome. With The New Day looking to extend history, hopefully a great Cruiserweight match and a strong upper card, this pay-per-view has really come together nicely. And you can read about everything that happens on Monday morning right here.

Subscribe to The Straight Shooters podcast on iTunes | Stitcher