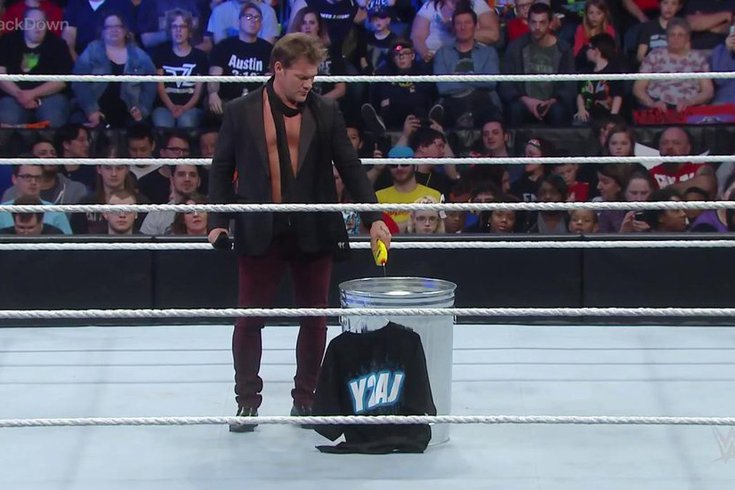 The BMO Harris Bradley Center in Milwaukee hosted SmackDown on Thursday night, two nights before WWE Roadblock in Toronto. Chris Jericho addressed why he turned on AJ Styles on Monday night after the two lost to The New Day, Dean Ambrose got a big win heading into his title match against Triple H at Roadblock, and we saw one of the better editions of MizTV that officially reignited a huge rivalry dating back to NXT.

Saturday night’s Roadblock event only has four matches confirmed thus far, but I’m sure more will be added as we get closer to the event. I’ll have a review of the event on Sunday morning, so if you miss it, I’ll have you covered.

Here’s your updated card for the show:

You can also read my interview with the “Fallen Angel” Christopher Daniels of Ring of Honor fame as ROH visits Philly’s 2300 Arena on Saturday night as well.

And if you haven’t had a chance to read my interview with Bray Wyatt ahead of Roadblock on Saturday night, you can do that right here. Wyatt speaks candidly about his disappointment that his match with Brock Lesnar isn’t taking place at WrestleMania.

Sami Zayn is here to stay

MizTV opened the program and brought out Sami Zayn first, who attacked the Intercontinental Champion, Kevin Owens on Monday night. Owens attacked Neville after his match, so Zayn made the save and made his intentions for WrestleMania well known.

During the MizTV segment, the host asked Zayn to tell us about himself, but quickly interrupted to get to the dirt of the rivalry between himself and Owens. Zayn obliged and says he and Owens used to be the best of friends, including Zayn being the best man at Owens’ wedding, and he has no idea why Owens turned on him over a year ago the same night he won the NXT Championship from Neville.

Owens came out and said the reason he turned on Zayn was because he was doing it for his own career advancement. It wasn’t personal and he’s not sure why his best friend is mad at him. He even went so far as to call himself the victim. Zayn said he’ll have his shot at Owens and the Intercontinental Championship at WrestleMania, although no match between the two has been confirmed yet.

This was a really good promo, and when Owens was ready to leave, Neville showed up and we had ourselves an impromptu tag team match. Zayn and Neville would pull out the win after Owens left his tag team partner high and dry, something he’s well known for in WWE.

On Monday Night Raw, Chris Jericho turned on his tag team partner, AJ Styles, after the duo lost a WWE World Tag Team Championship match to The New Day. Jericho’s reasoning was that the crowd kept chanting, “AJ Styles!” instead of his name, so he told the fans they could all go to hell. He wound up setting fire to an Y2AJ T-Shirt, a short-lived concept for the failed tag team.

Styles didn’t show up, but that’s probably for the better. If these two clash at WrestleMania, it should be a great match and Styles should get a big win at his first-ever Mania. I’ll be looking forward to this one, despite the backward story they’ve told thus far.

I don’t get WWE. I don’t think I ever will. Not as long as they keep making ridiculous creative decisions that hamstring possible new stars and make them look as bad as possible. I don’t understand their booking. The Wyatt Family should be a feared entity in WWE and should be running roughshod all over the company. That’s what the group is basically built on.

But, nope. On Raw, Bray Wyatt and Dean Ambrose fought in the main event and Wyatt looked pretty good. Fast forward to SmackDown on Thursday night, and we have the Wyatts losing to Ambrose and three thrown together partners for him for no good reason whatsoever.

I understand it’s important to make Ambrose look strong heading into his title match, but why not have the Wyatts pull out a victory and make Bray look strong heading into his match with Lesnar, too? Ziggler or one of the Usos could have easily got pinned and Ambrose could have attacked the Wyatts with a chair or other weapon after the match to put over his craziness.

But, nope. The Wyatts lose again. WWE thinks wins and losses don’t matter, but when there’s no clear-cut next generation superstar to supersede John Cena, and the people don’t want it to be Reigns right now, wins and losses clearly matter. While the landscape of professional wrestling in 2016 is different now than it was in the 1980s and 1990s, there are still fundamental ways to build stars and make them important. WWE hasn’t done that in over 10 years. They need to change their outlook.

The Golden Truth about toilet paper

If you can’t trust a man giving you toilet paper, who can you trust?

• Sami Zayn and Neville d. Kevin Owens (c-IC) and The Miz by pinfall after Zayn hit Miz with the Helluva Kick. Owens left the ring and headed up the stage, abandoning Miz towards the end of the match.

• Brie Bella d. Summer Rae by submission via the Yes Lock. Lana, who was on commentary during the match, attacked Brie after her victory.