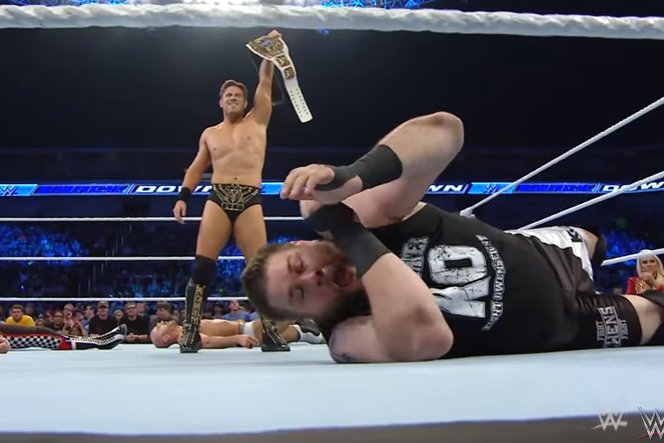 The Miz made certain nobody would overlook him in the Extreme Rules Fatal Four Way match for his Intercontinental Championship Thursday night.

Des Moines, Iowa’s Wells Fargo Arena [real original] was the host for SmackDown Thursday night as we inched closer and closer to Extreme Rules, which takes place next Sunday. While the card for the next pay-per-view is taking shape with five matches confirmed so far, SmackDown did a great job featuring some of the high profile angles and also the in-ring debut of Dana Brooke on the main roster.

This episode of SmackDown had a bigger feel to it, and that could be due to either more efficient building to their pay-per-views or completely by accident. But, I think the creative team finally has their stuff together and has been giving us more entertaining programming recently.

Dean Ambrose opened the program by saying both he and Chris Jericho were even after he tore apart Jericho’s $15,000 jacket Monday on Raw. Since Jericho destroyed the plant Mitch that didn’t do anything to anyone, Ambrose destroyed his jacket. SmackDown lead announcer Mauro Ranallo called it a jacketastrophe, and that’s why he’s awesome.

Jericho’s music interrupted Ambrose as he ran him down. The lights went off and when they came back on seconds later, Ambrose was lying face-down in the ring with Jericho standing over top of him with a straitjacket in his hand. He put Ambrose in the straitjacket and kicked and punched him repeatedly while yelling, “Get crazy!” at him. Ambrose tried fighting back, but it was to no avail. Jericho stood tall and said he just gave us the “Gift of Jericho” to end the segment.

You really can’t go wrong with these talents in the main event. Even The Miz. Sometimes. In a very good television main event, Cesaro took the pin after Owens hit him with the Bullfrog Splash after Zayn accidentally hit him with the Helluva Kick as he was aiming for Miz as the champion ducked out of the way.

After the match, Miz attacked Zayn and then Owens hit him with the Pop-Up Powerbomb. The Miz then hit the Skull-Crushing Finale on Owens and stood tall to end the program. I didn’t think we’d ever see that at this point in Miz’s career, but hey, I shouldn’t be surprised.

Anderson and Gallows look to lay waste to the Usos

Luke Gallows and Karl Anderson took on The Usos in a match where both the WWE World Heavyweight Champion Roman Reigns and AJ Styles were banned from ringside. The teams had a long match that didn’t have a satisfying ending, as Gallows interrupted a pinfall attempt and threw Jimmy Uso over the announce table and the referee called for the bell and disqualified Gallows and Anderson.

With Jimmy disposed of, Jey Uso was thrown shoulder-first into the steel ring steps by Anderson, who followed it up with a rocket kick. Jimmy launched into Anderson, but Gallows wasn’t far behind with a steel chair and hit him in the back and Anderson followed it up with another devastating blow with the chair to the back of Jimmy. There was no doubt that they’d be standing tall at the end.

The newest NXT call up, Dana Brooke is a bodybuilding champion and was tired of Becky Lynch reaping the rewards of Emma’s hard work in NXT, so she says. That’s why she attacked her on Raw, and that’s why she faced her in one-on-one action in the ring on Thursday night.

Brooke and Lynch had an okay match with a not so surprising ending. Debuting talents should never lose their match, and, though it happens sometimes, it wasn’t going to happen with Brooke’s debut, especially with Emma in her corner. To get her further over as a heel, Brooke won with a bridge and jackknife pin.

The New Day weren't thrilled with The Vaudevillains’ interference during their match against the Dudley Boyz on Monday Night Raw, so they let them know it during a promo before Aiden English went one-on-one with Kofi Kingston. But, not before English gave us another preview of just how good his singing vocals are.

The WWE World Tag Team Championship will be on the line at Extreme Rules next Sunday with New Day defending against the Vaudevillains, so this match made sense. The finish came when Kingston went for a sunset flip attempt, but it was countered by English and he held onto the ropes for extra leverage and the referee didn’t see it, and he got the three count.

Rusev got his win back against Sin Cara after he lost to him on Raw Monday night, for some reason. Lana helped out by throwing water into the face of Sin Cara’s tag team partner and current United States Champion Kalisto while he was at ringside doing commentary for the match. Rusev kicked Kalisto from behind and submitted Sin Cara with The Accolade. He posed with the U.S. Championship after the match over a fallen Kalisto.

I loved how Rusev, Lana and Kalisto all took to Twitter after the match to further the feud. 2016, folks.

Get my Twitter handle correct incompetent child. The only person that is insecure is YOU. Hence why U R a CHEATER!! https://t.co/bzCiUijUMS

Hahahahahahahahah !!!! He is scared !!! Like a little baby crying @KalistoWWE don't mess with us again ! #SmackDown https://t.co/WXv74VyEIt

I do not appreciate you lying about me on #SmackDown @ByronSaxton !!! @KalistoWWE must have paid you off like he did that ref on #Raw ! SMH

No fear perro! Actions will speak louder than words!!#ExtremeRules https://t.co/6ksWJpqwI9

Make Darren Young great again. Only Bob Backlund can do this, and the vignettes started on Thursday night. This is awesome. I can’t wait for more.

• Rusev d. Sin Cara by submission via The Accolade.

• Aiden English d. Kofi Kingston by pinfall after holding onto the ropes when countering a sunset flip attempt by Kingston.

• Tyler Breeze/R-Truth [Gorgeous Truth] d. Goldust/Fandango [Goldango] after Breeze pinned Goldust when Fandango turned on him and clotheslined him. Breeze and Fandango both attacked Goldust and R-Truth.