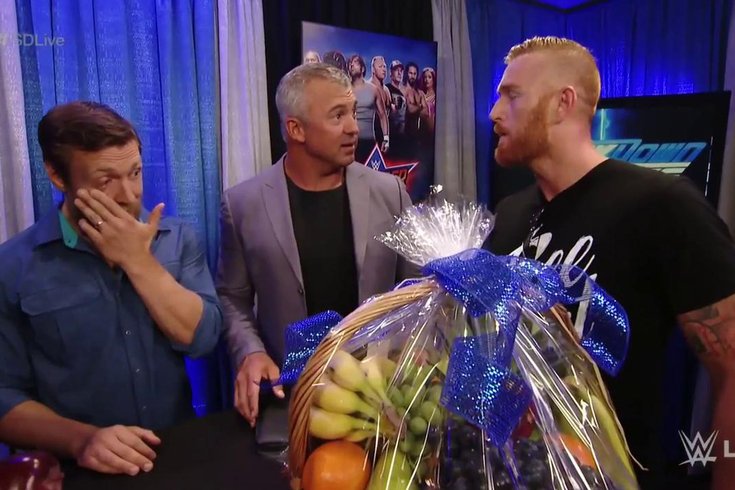 Heath Slater had to go through Randy Orton to win a SmackDown contract on Tuesday night. Would he get the job done?

On Tuesday night, it was time for SmackDown’s go-home show to SummerSlam live from the Frank Erwin Center in Austin, Texas. It was the last chance we’d see how WWE planned to book the show’s top two feuds heading into the biggest event of the summer. We also got a glimpse into the best of the best in the tag team division with a big match and Eva Marie’s long-anticipated debut.

The WWE World Champion crashed Miz TV before it could even really get started, much to the dismay of the WWE Intercontinental Champion.

But before Dean Ambrose could even get a coherent thought out, his SummerSlam challenger’s music hit and Dolph Ziggler came out, nearly coming to blows with Ambrose before The Miz tried to keep that from happening. Ziggler then gave a fiery promo telling Ambrose would have to come to terms with being the last person to put the Showoff over the edge to beat him for the title.

Ambrose, rather unimpressed, let Ziggler know that being champion is a lot harder than achieving it. Ambrose said Ziggler is afraid of the pressure and can’t handle it. He said Ziggler was just happy being a “sarcastic little star in your own crappy movie.”

Ziggler responded by saying Ambrose doesn’t have what it takes to put him away. Ziggler’s gonna keep kicking out and causing Ambrose to dig deep for one last move – and boom. A superkick. Ziggler laid out the WWE World Champion with a superkick that was truly out of nowhere. “This Sunday, you’ll realize that I am that damn good,” Ziggler said before leaving the ring.

John Cena was set to exact some revenge on Alberto Del Rio in the night’s main event, and he did just that. In a good television match, complete with Cena’s SummerSlam opponent, AJ Styles, on commentary, Cena pinned Del Rio after hitting him with an Attitude Adjustment.

Mere moments later, Styles came out of nowhere with the Phenomenal Forearm on Cena. However, that wasn’t enough as Cena played possum and eventually got the upper hand and hit the Attitude Adjustment through the announce table.

The program opened with Randy Orton officially signing the contract for his SummerSlam match against Brock Lesnar. This leaves me to wonder – why would WWE wait until the Tuesday before SummerSlam to make Lesnar vs. Orton official? Ah, the little things that don’t make sense.

Heath Slater came in with a fruit basket for the SmackDown commissioner and general manager, which was written out to “Bob” instead of “Boss.” Orton said he had an idea – it would be him vs. Slater later in the program for a chance at Slater receiving a SmackDown contract.

Slater didn’t fare well physically, but he technically would win the match against Orton since The Viper wouldn’t stop pummeling him, causing the referee to call for the disqualification.

Orton then mocked Lesnar and hit Slater with a few german suplexes on Slater and ended him with an RKO. This time, though, we definitely saw it coming.

It looks like Orton is primed and ready for Lesnar at SummerSlam, and I’m looking forward to this match much more than I did when it was announced last month. Orton has been great in the buildup on his end, and Lesnar and Paul Heyman have done a great job on Monday Night Raw. This will be the true main event of SummerSlam, and I expect it to close the show.

Backstage, Slater was meeting with the doctor as Bryan and McMahon came in with Slater’s brand-new SmackDown contract. Clearly suffering from what one could only describe as concussion symptoms, Slater called Shane “Stephanie,” therefore causing the SmackDown commissioner to take back the contract. Slater didn’t even notice until a few seconds later. Poor guy.

While Eva Marie’s entrance is quite good, Naomi’s new entrance – complete with a glowing outfit, glowsticks for the crowd and a glowing mouthpiece. The crowd seemed to enjoy it, and that’s half the battle. That bodes well for Naomi in the future.

However, Naomi was set to take on Eva Marie, who already had a couple of mishaps in previous weeks that prevented her from competing. Lo and behold, another “mishap” would prevent Eva Marie from wrestling Tuesday night – that terrible Austin, Texas traffic.

The voiceover guy who does her entrance is perfect. I need to know who he is pronto. I need a new voicemail message.

Eva Marie would later make an appearance during the women’s tag team match of Becky Lynch and Carmella vs. Natalya and Alexa Bliss, causing Natalya and Bliss to lose the match.

· All of the tag teams – at least the ones getting television time – appeared in a 12-man tag team match with American Alpha teaming with the Usos and Hype Bros to take on Breezano, The Vaudevillains and The Ascension. American Alpha won the match for their team easily after hitting Grand Amplitude on Aiden English. We need more tag teams on SmackDown. Now.

· After the WWE World Champion defeated Erick Rowan, Bray Wyatt, who was sitting at ringside in his trademark rocking chair, stared at Rowan’s sheep mask and then left it on the chair before walking to the back. Mauro Ranallo teased we may have seen the end of the Wyatt Family. Gee, that was quick.

Joining @ShootersRadio on Friday at 5pm ET will be none other than @JRsBBQ! We'll talk #SummerSlam and a lot more! pic.twitter.com/dosVWWIVeT

· Naomi vs. Eva Marie ended in a No Contest because Eva Marie was “stuck in traffic.”

· Becky Lynch/Carmella d. Natalya/Alexa Bliss by submission after Lynch made Natalya tap out to the Dis-Arm-Her. Eva Marie appeared during the match, and Naomi confronted her, causing a huge distraction in the ring.