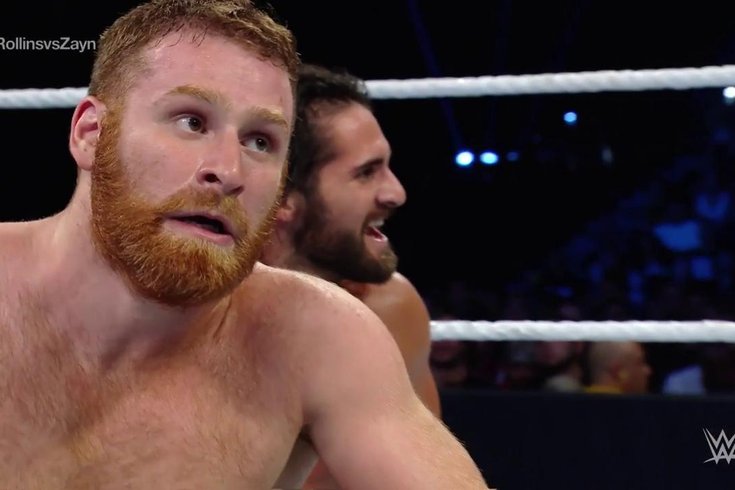 Sami Zayn and Seth Rollins squared off for the first time as members of the main roster on Thursday night.]

The Tucson Arena in Tucson, Ariz., hosted SmackDown on Thursday night, days after WWE was flipped-turned upside down by the Lunatic Fringe, Dean Ambrose. The new WWE World Heavyweight Champion made sure he wouldn’t let Seth Rollins forget that he was the champion and that the Ambrose Asylum was ready to go whenever he gave the cue. More on that later.

On the heels of Roman Reigns’ suspension, which was announced Tuesday before the SmackDown taping began, both Ambrose and Rollins didn’t mention their mutual opponent for Battleground’s Triple Threat main event once on the broadcast. Maybe WWE is still deciding how to portray Reigns’ absence in storyline, but nobody’s not going to know Reigns was suspended.

Maybe it’s just a matter of them waiting until Raw on Monday to explain it. But, Reigns won’t be on television until the Battleground main event on July 24th, so he’ll miss the WWE Draft on the first live episode of SmackDown on Tuesday, July 19th.

David Otunga filled in on commentary for the indefinitely suspended Jerry Lawler, as well, as he was arrested last week due to a domestic incident with his fiancée. There’s no word yet on when Lawler will return.

Rollins and Zayn cause impromptu edition of Ambrose Asylum

The Architect opened the program by calling our collective parents big, fat liars. Yeah, he wasn’t happy about the Lunatic Fringe cashing in his Money in the Bank briefcase the same night he won it on Rollins, becoming the WWE World Heavyweight Champion.

Rollins said he’s the best member of The Shield and said he was done talking about Battleground. He then issued an open challenge for the main event and Sami Zayn obliged. He came to the ring and Rollins immediately hit him with a, “What, did your master Kevin Owens let you off the leash for a couple hours? What’s the deal?” And the crowd didn’t like that too much. Neither did Zayn, who let Rollins continue talking as he accepted Zayn’s challenge for the main event.

The champion’s music hit and Ambrose made his way down to the ring and had security set up his set for the newest edition, the Championship Edition, of the Ambrose Asylum, right in the middle of the promo. Rollins walked off, and, well, that might’ve been the shortest Ambrose Asylum ever.

In the main event, Ambrose joined the commentary table for a fantastic main event. Both Rollins and Zayn looked crisp and meshed very well in the ring together, making this SmackDown main event one of the better ones of the year.

After defeating Zayn with the Pedigree, Rollins confronted Ambrose at the commentary table and attacked him after teasing walking away, but Ambrose fought back. They both got in the ring and Ambrose went for Dirty Deeds, but Rollins escaped and headed towards the top of the ramp as the show went off the air.

The Club isn’t done with The Usos

The Usos approached The Club backstage earlier in the night, leading to this match where The Club wouldn’t be at ringside. However, Jey Uso remained at ringside in the corner of hisbrother, but didn’t get involved. Instead, Luke Gallows and Karl Anderson attacked him on the outside as they ran through the crowd and jumped him after Jimmy hit Styles with a superkick.

Styles kicked out, then thanks to the distraction his stable mates provided, hit a diving elbow to the outside and then the Phenomenal Forearm to Jimmy inside the ring to gain the victory. Styles just gets better and better every week.

The Wyatts’ new targets are The New Day

On Monday night, it was The New Day interrupting the returning Bray Wyatt during his promo. After their win against The Vaudevillains on Thursday night, the WWE World Tag Team Champions were faced with a promo on the big screen from Wyatt. Wyatt said they made a big mistake on Monday night and said The New Day would ultimately fall.

The camera once again focused a few times on Xavier Woods, who had a confused look on his face as he did on Raw Monday. I’m not sure if this is the tease where the beginning of the breakup of the group happens, but I surely hope not. However, it’s a great angle for Wyatt and co. to get back into a prominent position on the card. We’ll see how the fallout of this goes as we go through the summer, but this is one angle I’m really looking forward to.

Charlotte and Sasha Banks on a collision course

While the WWE Women’s Champion wasn’t in action on Thursday night, the angle between Sasha Banks and her pursuit for Charlotte’s title was furthered on SmackDown. Dana Brooke defeated Becky Lynch in a match and Charlotte started attacking Lynch after the match until The Boss’s music hit and Banks made her way to the ring.

She was ready for a fight, and Charlotte teased being ready until quickly escaping the ring as Banks went for her. Brooke tried attacking Banks from behind, but she was privy to that and locked her in the Bank Statement and sent a loud and clear message to the Women’s Champion.

Crews vs. Sheamus II ends differently this time around

It looks like the feud between Apollo Crews and Sheamus is far from over. The two met in a Money in the Bank rematch on Thursday night and this time, Sheamus got the win viacountout. It wasn’t a great match by any means, but it’ll set up [hopefully] a feud win for Crews as he moves onto the next one after Sheamus.

Sheamus hasn’t been great since returning from injury last year, and his run as WWE World Heavyweight Champion was less than stellar. I still think he’s capable of having a good match and being in good feuds, but he just hasn’t been in any worthwhile ones since he’s been back. This feud with Crews could have been good, but there’s been no importance placed on it from almost everyone – even the commentary team. It seems like the only people who care about this are Sheamus and Crews, and that’s not good.

• Cesaro d. Alberto Del Rio by pinfall via The Neutralizer.

• AJ Styles d. Jimmy Uso by pinfall via the Phenomenal Forearm. The Club came through the crowd and attacked Jey Uso, who was at ringside, allowing Styles to hit the forearm for the win.

• Non-Title: The New Day (c) d. The Vaudevillains by pinfall via the Midnight Hour. Bray Wyatt cut a promo on The New Day after the match.

• Dana Brooke d. Becky Lynch by pinfall with a small package after Lynch was distracted by Charlotte on the outside of the ring. Charlotte and Brooke attacked Lynch after the match before Sasha Banks came out to confront the Women’s Champion.

• Seth Rollins d. Sami Zayn by pinfall via the Pedigree.