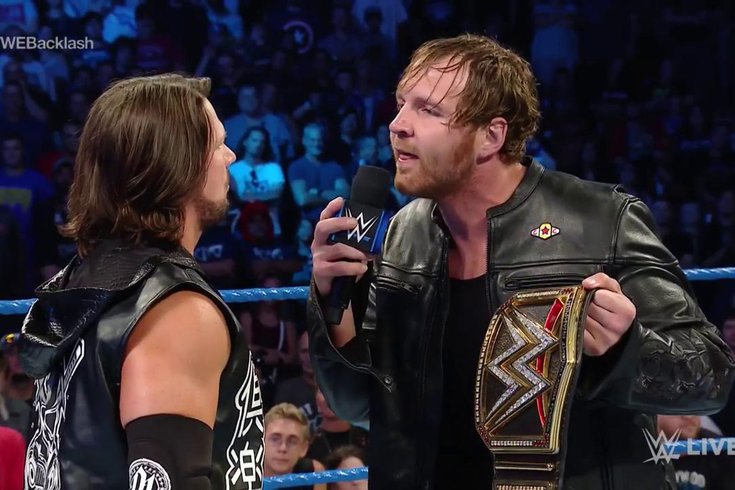 AJ Styles exacted some revenge on Dean Ambrose for last Tuesday with a vicious low blow out of nowhere.

It was the last SmackDown Live show before their first brand-only pay-per-view since 2007 as Backlash comes our way this Sunday. But, first, the SmackDown crew stopped at the Pinnacle Bank Arena in Lincoln, Neb. for one last tease before we see at least two new champions crowned on Sunday night.

Unfortunately, one of the biggest reasons to watch Backlash became no reason as American Alpha was pulled from the card. You can read the details below.

Ambrose and Styles face off

Five days from their WWE World Championship contest, Dean Ambrose and AJ Styles came face-to-face with each other in the main event. Ambrose had a trophy for Styles; he labeled it a participation trophy.

That didn’t sit well with Styles. He was sporting the sweatband from John Cena, still, and said he is the face that runs the place. Ambrose clearly doesn’t take any of his opponents seriously, and that was an issue for Styles. He said Cena took him very seriously, and he still beat him clean.

'We don't give trophies away for the FACE that comes in SECOND place!" - @TheDeanAmbrose to @AJStylesOrg #SDLive pic.twitter.com/cfzrvZSq7k

Ambrose pushed one too many of Styles’ buttons, and that results in a cowardly low blow from Styles to Ambrose as the program hurriedly rushed off the air.

The segment started late and went off the air abruptly, but as least we saw what we were supposed to see. Styles stood tall over Ambrose after the low blow, so look for a different look at the end of Backlash on Sunday. Maybe. Stay tuned for my preview later this week.

Finally, The Usos have turned heel. All it took was a squash match by American Alpha to eliminate Jimmy and Jey Uso from the SmackDown Tag Team Championship tournament.

Before the match, the two teams shook hands but Jimmy and Jey attacked Jason Jordan and Chad Gable trying to get the upper hand. It didn’t work. As quickly as the match started, it was over as Jordan and Gable won with Grand Amplitude.

After the match, the two teams shook hands again, but this time, Jimmy and Jey had enough and attacked Jordan and Gable. They injured Gable’s knee, and Shane McMahon said on Talking Smack after the show that Gable suffered a sprained MCL and American Alpha will not be competing at Backlash.

Instead, Jimmy and Jey Uso will get another chance as they face the Hype Bros., who were defeated by Heath Slater and Rhyno to determine who will face Slater and Rhyno for the titles in the Final at Backlash. I’m guessing that match will take place on the preshow, but it wouldn’t surprise me if it’s on the main card.

It sucks that we won’t see American Alpha on the first SmackDown pay-per-view, but the storyline seems to be going in the way of American Alpha vs. The Usos before Jordan and Gable reach the top of the tag team chain. And I’m fine with that. Slater and Rhyno as tag team champions would be awesome.

By the way, you gotta love Slater’s kids. This storyline has been a hidden gem.

It, of course, turned into a wild brawl which preceded a six-woman tag match a little bit later in the show with the faces, Nikki Bella, Becky Lynch and Naomi going against the heels, Natalya, Carmella and Alexa Bliss. In that match, Bliss got the win for her team by making Bella tap out to the Code of Silence.

Maybe Bray Wyatt has tried too hard to get into the head of Randy Orton. These guys are similar in character, but Orton is less creeptastic and more blunt. And in a promo on Tuesday night, he basically said he wasn’t afraid one bit of Wyatt heading into their match this Sunday. I’m looking forward to this one.

It was one of the better promos we’ve seen from Orton, and it looks like he’s comfortable in his role on SmackDown and seems genuinely more invested since returning to action.

The Miz gets a match

The Miz wasn’t happy, again, with general manager Daniel Bryan for giving Dolph Ziggler an Intercontinental Championship opportunity at Backlash. Bryan backed up his statement from two Tuesdays ago and said Miz had the chance to wrestle and backed down. Now that’s a coward, and that’s exactly what Bryan meant when he called Miz that on Talking Smack.

Miz was relegated to a non-title contest against Apollo Crews with Ziggler on commentary at ringside. Of course, Miz got in Ziggler’s face and slapped him during the match, and then shoved Crews into him. This allowed the Intercontinental Champion to hit the Skull-Crushing Finale on Crews for the win.

• Six-Woman Tag Match: Carmella/Natalya/Alexa Bliss d. Becky Lynch/Nikki Bella/Naomi by submission after Carmella made Bella tap out with the Code of Silence.