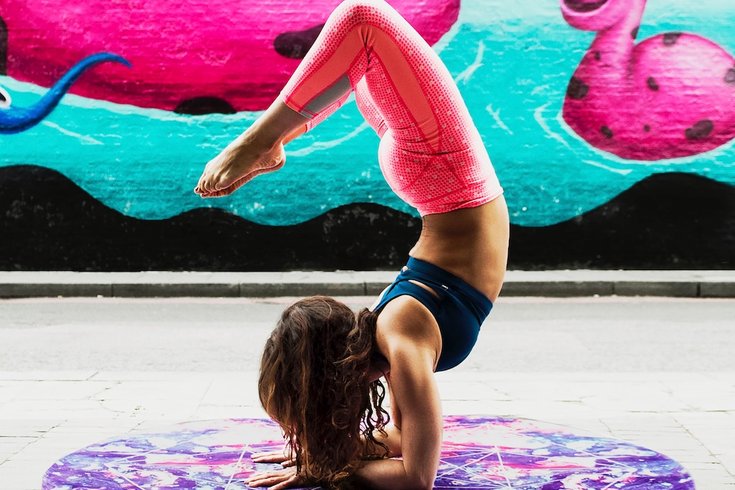 Rebecca Leigh looks like just about every other Instagram yogi or influencer. With more than 27,000 followers, her daily photos of impressive yoga poses make you wonder what editing software she uses because, well, they’re that good.

Look at enough of her feed and you'll discover that the Maryland resident had a harrowing medical scare tied to her practice of yoga.

In 2017, Leigh shared a photo of herself in the hospital, revealing that she had a stroke after tearing an artery in her neck while practicing headstands and handstands.

“I tore my carotid artery by hyperextending my neck during hollowback handstands,” she tells her followers. “It’s rare, but it happens,” says Leigh. (Check out the hollowback handstand hashtag on Instagram — which has more than 37,000 posts — here.)

RELATED READ: What you need to know about 'massive stroke' that killed Luke Perry

Leigh explains that she had all of the signs of a stroke but ignored them – for three whole days. She experienced a very loud pop and gurgling in her ear and brain, her left arm stopped working, she had massive headaches, she experienced dizziness, and eventually began to lose her peripheral vision. “It took three days for my right eye to droop for me to go to the emergency room,” she explains.

Yep, well. This was me 1 year ago. Well, 1 year & 3 days ago. Because it took 3 days for my right eye to droop for me to go to the emergency room. It wasn’t losing my peripheral vision or seeing wavy lines or a black curtain close over my sight. Or the dizziness or almost passing out. Not the massive headaches, face or neck pain. Not my left arm not working. Not the very loud & clear sound of a pop & gurgling in my ear & brain. But 3 days later, after all of that happened, my right eye looked weird & I went to the emergency room where I stayed a week in the intensive neurological care unit. That’s where I found out I had torn my carotid artery & had a stroke & developed an aneurism. It took 3 days for me to go, because the last thing a 39yo, fit, nonsmoker, clean eating, stress free, happy girl thinks, is that she could be having a stroke. But I did. I tore my carotid artery by hyperextending my neck during hollowback handstands. A pose I’ve done a gazillion times before. It’s rare but it happens. (Google “carotid artery dissection & yoga”) For the first 3 months I was basically just breathing. I slept a lot. A lot, a lot. I only got out of bed to use the bathroom. I lost 20 lbs. My brain felt like it was put in a vice grip that had nails all around it. It was miserable. It wasn’t until around 6 months later that I started to feel somewhat more human again. In the beginning, the anxiety was terrible. I couldn’t go more than a few moments without worrying another stroke was going to happen or that my aneurysm would burst. Death was something I worried about constantly. Today I am doing much better. I have a headache and face pain from the nerve damage everyday. I regained my arm but it feels like a very low voltage of electricity is constantly going through it. My vision honestly SUCKS. My right eye, better than it was, is still noticeably different to me. This is something that I obviously still think about every day, but I am no longer consumed with anxiety or the thought of death being over my shoulder with every second. I know how lucky I am. I know how much differently this could have been. I am obsessively grateful. 1 year. 1 year. I am so very blessed.

At the hospital, a CT angiography scan, which focuses specifically on the blood vessels, revealed that Leigh had torn her right carotid artery, which apparently sent a blood clot to her brain and caused the stroke. The trauma of the tear also caused a small aneurysm to develop, Fox News reports.

Leigh spent the next several weeks in constant pain and had to avoid light, according to the Fox story. She said she couldn’t get out of bed or even eat without help. She slowly regained strength and made her way back to the yoga mat, starting with a lotus pose to focus on breathing.

Stroke is the fifth-leading cause of death in the United States, according to the U.S. Centers for Disease Control and Prevention. Thirty-four percent of people hospitalized for stroke in 2009, the most recent data available, were under age 65.

There have been case reports of the bleeding type of strokes caused by heads in extreme angled positions (such as in a sink at a hair salon or during a chiropractic adjustment) but there have also been cases of dislodged clots from big arteries in the neck from similar positions, Good Morning America reports.

Here's how arterial dissection occurs: A rapid rotation or hyperextension of the neck tears a small hole in the lining of one of its two main arteries. Blood seeps into the pocket, causing a clot to form. The clot expands, like a balloon, until blood flow to the brain is stifled and a stroke occurs.

According to Yoga Journal, poses such as inversions – Shoulderstand and Headstand, Parsvakonasana (Side Angle Pose), Trikonasana (Triangle Pose) and Halasana (Plow Pose), for example – are specifically highlighted in studies relating to carotid artery dissection because they can result in sudden neck movements or put extreme pressure on the neck. Other situations mentioned include hard sneezes or coughs.

Of course, arterial dissection is rare, striking about 1.5 out of every 100,000 Americans annually, with yoga being the culprit in a minuscule number of cases, Yoga Journal reports. But while arterial dissection accounts for just two percent of total strokes, it is one of the main causes of stroke in young and middle-aged people.