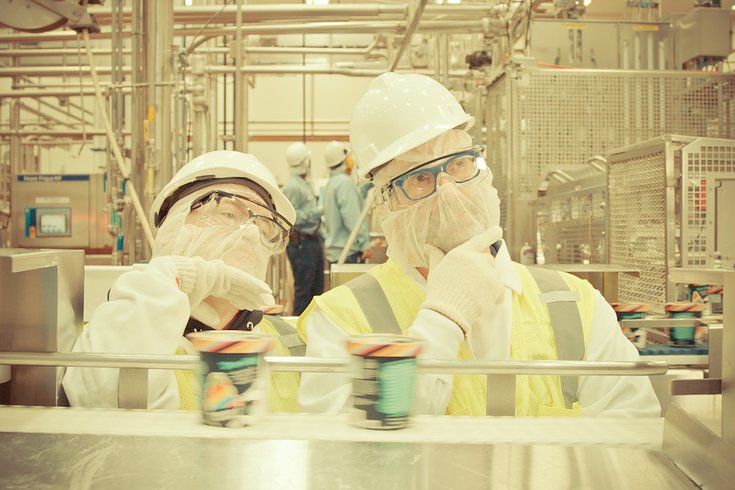 Big Gay Ice Cream founders Bryan Petroff and Douglas Quint in a reflective moment as pints of their ice cream make their way from factory to stores in Philadelphia and beyond.

We all make sacrifices for our craft. So, when an e-mail arrived on March 29 gauging my interest in an “opportunity to try NEW Big Gay Ice Cream pints,” the response went something like this: Uh, yeah.

Ice cream is one of those things that most people consider really, really good. We here at PhillyVoice are among those people.

On Friday, a trio of Big Gay pints – Salty Pimp®, Birfdae Cëk™ and the all-new Lunchbox™ – arrived in a decadently colorful package that came complete with dry-ice handling instructions. (This was appreciated as I would have grabbed the dry ice while tearing through the packaging and unwittingly suffered the consequences.)

Yes, there is a news hook for this ice-cream based arrangement.

Setting aside the offensive use of “sprinkles” over the definitively correct term “jimmies” – we’ll get back to that very important issue – Quint cleared some Monday afternoon time to discuss their unusual entrance into the ice-cream power-player hierarchy, social media’s role in their successes-to-date and more.

Quint noted that they started with an ice cream truck in 2009 because they were “looking for something fun to do” despite no food-industry aspirations amid America’s recession-tempered mood.

With all due respect to Mister Softee, they believed that existing ice-cream trucks seemed to be there because they had to be, not because they wanted to be. So, the duo grabbed a truck and got to driving.

"We were doing a weird thing that barely made sense. It was as if Salvador Dali had an ice cream truck." --Douglas Quint

“Not to diminish what Mr. Softee is, because ice cream makes people happy, but they’re abysmal in New York City. Some don’t even seem to care if a customer walks up,” Quint said. “I saw this idea of being a deliriously happy ice cream man. Go out there with performance art and earn the $4. The customers are giving you their money, so you should at least act appreciative.”

Act appreciative, they did. They didn’t initially stray far from the vanilla/chocolate constraints of the ice-cream truck world. Instead, they changed the toppings menu.

“Balsamic vinegar can taste good on ice cream. Simple things like that,” he explained.

Soon, they launched a Facebook page “just so our friends could have a laugh about what we were doing with the Big Gay Ice Cream Truck,” he said.

“The name just stuck. It was part of the spirit of what we wanted to do," he said. “So many people started joining the group that we realized that something had found us. We were doing a weird thing that barely made sense. It was as if Salvador Dali had an ice cream truck. New York City decided to make the whole thing succeed.”

By that, he meant word spread quickly in the Big Apple, with Twitter as a promotional treasure of sorts.

Fast forward two years, and they landed an appearance on “The Rachael Ray Show.”

“The next morning, the line was two hours long by the time we arrived,” Quint recalled.

The attention was good, yes, but things started to change in a world where cupcake trucks would soon roll into town.

“The spirit was starting to leave it. I started to feel like a vending machine,” said Quint, explaining how the truck genesis morphed into ice cream parlors. “The cupcake trucks are here now, so let’s move on. I’m really proud of that decision.”

They found success with their parlors, but that was a stepping stone.

“(Having our) ice cream available to all people who will buy it was always an end goal for us,” he said, noting that they wanted to skip the regional step for a national move with online services making the pints available. “It didn’t feel like the right time to do it until now. The online sales give us a way to creep around the world.”

Sure, the “Big Gay” moniker helped with branding to a certain extent, “but people like to point out that the colors in our logo aren’t in rainbow order.” There was no market research. They think that’s laughable.

“We didn’t corner a ‘gay ice cream niche.’ We just want to feed people who want to have fun eating ice cream,” he said.

There were a couple strategies that paid off, whether that be fiscally or spiritually. Ice-cream parlors in college towns are having their moment, he said, noting that couples often choose ice cream over boozing.

Then, as is the case with their Philadelphia location (near Broad and South Streets), being near quality restaurants allows them to tap into a dynamic which holds people like to walk around after dinner instead of eating dessert at the table.

“One reason we really like the Philly spot is because it’s within walking distance of Marc Vetri restaurants. The fact that somebody just ate at a Vetri restaurant and came to us for dessert, it’s a thrill,” he said, noting the parlor's proximity to Amis Trattoria and Vetri Ristorante.

Quint said they have high hopes for the pint-fueled success because “people know us a little though online. We’ve had great success with how we portray ourselves on social media. If you follow us there, you already know the brand. That’s been a real key for us.”

“New York City was our army the first two years,” he continued. “I think that now, our army is vast, and we’re going to work twice as hard.”

Now that you know their back story, let’s get onto the Pint Review. 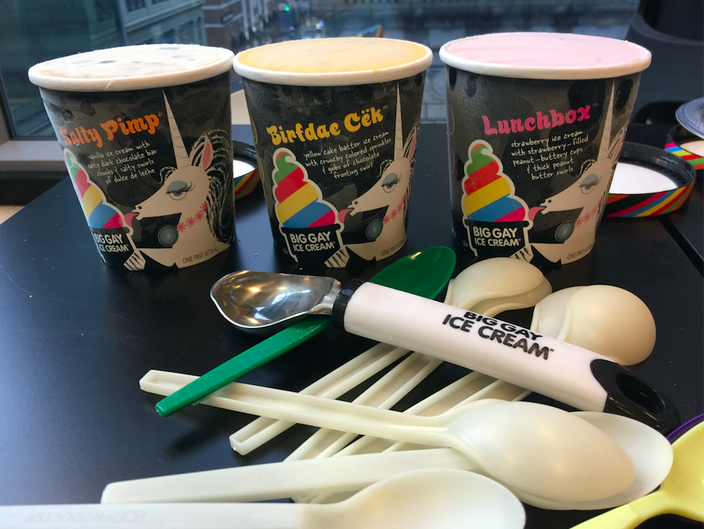 The three versions we sampled were:

IMHO, the Salty Pimp was the best, outpointing Birfdae Cëk because it tasted a bit too much like it was direct from the batter bowl. When Quint got word that I was conflicted by Lunchbox – it was good, yes, but weird – his retort was true to brand sensibilities.

“Free your mind, man,” he said, noting that the concept was to blend various things one would find in a – wait for it – lunchbox into a single flavor. “The problem here is entirely you.”

I can respect that. This, even though Quint calls jimmies sprinkles because that’s common up in his native Maine. (He knows this market well enough to realize this will be a source of contention amongst his Philadelphia customers).

And now, reviews from three of the PhillyVoice staffers who were lucky enough to be in the office when the ice cream arrived:

Jen Reardon: The salted caramel is definitely the pick of the three. It reminds me a lot of moose tracks, and moose tracks is one of my favorite flavors of ice cream. I'd go with the strawberry next, although I'm not a huge fan of the PB&J attempt. I like strawberry ice cream and I like peanut butter cups, but I don't really like them together. I felt like the cake batter one was kind of a letdown. I really like the birthday cake ice cream at John's in South Philly, so I had high hopes.

John Kopp: Salty Pimp is the best of the bunch, but also the most traditional flavor. A safe choice for the least ambitious. With Lunchbox, I never thought to mix strawberry and peanut butter. An interesting combo, but probably not one I’d order too often. Birthday Cek is a little too chewy. Could be creamier. It tastes like cake batter, so if you’re the type that licks batter off the spatula, you’ll dig it.

Thom Carroll: Salted caramel is not usually something I enjoy, but since this didn’t have too much caramel, it was manageable. Probably a little too buttery and rich for my liking, but the chocolate bits taste great. As for Lunchbox, peanut butter in ice cream is something I always love, but I wish it had the same chocolate chips as the salted caramel one. Strawberry flavor is done well. I wish the peanut butter cups were just peanut butter, and not filled with jelly goo. Birthday cake? Forget about it. I always dislike this flavor and that’s not changing today. Overall, good flavors, but I always which ice cream had less sugar.

Presuming you're now hungry for ice cream (sorry!), Big Gay Ice Cream's website includes locations (and online services) where it can be purchased. They can additionally be found at Shop n Bag and CVS Pharmacy locations, according to the company.