10 players who could interest the Eagles at the Senior Bowl: Offense edition 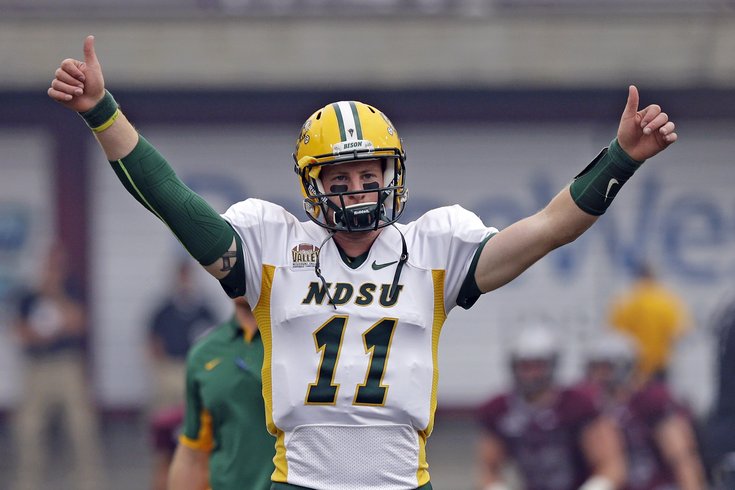 All week long down in Mobile, Ala., quality college football prospects will be evaluated on and off the field by scouts and front office people at the Senior Bowl, which should be of particular interest to Eagles fans. Since 2010, the Eagles have drafted more players competing at the Senior Bowl than any other team in the NFL.

Here are 10 players who should interest the Eagles.

About a month and a half ago, pre-Chip firing and pre-Wentz hype, we took a detailed look at Wentz. It's worth a look, I think, but the CliffsNotes version is that he's big, has a great arm, a quick release for his size, touch, surprising athleticism, a good feel for the game, and competitiveness.

There are two knocks on him. He can occasionally be inaccurate down the field, although I believe that's often overstated. My view is that he's inaccurate sometimes on the run, and when he doesn't set his feet. The other knock was the level of competition he played against at North Dakota State. This week will be Wentz's chance to shine against the big boys, and there won't be a player with a bigger spotlight on him than Wentz.

Again, we took a much deeper look at Prescott back in November. If you're intrigued by him, again, I think it's worth a look.

Prescott's numbers in 2015 were tremendous. Equally important, in my opinion, is that he has shown steady improvement as his college career has progressed:

Prescott has found the end zone as a runner 41 times in his college career. That is impressive.

However, I watched a couple of Prescott's games (vs LSU and Texas A&M in 2015, both of which were losses), and I don't see a quarterback who is ready to have immediate success at the NFL level. He has a ways to go.

In the games I watched, Prescott was not accurate at all throwing deep and intermediate passes. He's high, he's low, he's left, and he's right, but he's rarely hitting his receivers on the mark. He does, however, do a really nice job in the short passing game. While he has the skills to take off and run, he is a "pass first" quarterback, as he will hang in the pocket until his reads have been exhausted, or until he feels pressure.

I feel that it may take a few years, but in a situation where a team can have patience, a good coaching staff can perhaps grow Prescott's natural physical talent.

In case you're unfamiliar with Miller's background, he was among the trio of Ohio State quarterbacks heading into this season, and he moved to WR/RB because of the logjam there. Miller could be the next in line of quarterbacks who try to make it at another position at the next level, like Brad Smith, Hines Ward, or Denard Robinson.

Miller may be the best athlete in the country. Watch this ridiculous move he put on this poor Virginia Tech defender earlier this season.

This could be viewed as a luxury pick on a team that can't afford luxury picks. However, an offense with vision and creativity could absolutely make use of Miller's talents. In Kansas City, the Chiefs had a creative running game, often using their wide receivers on jet sweeps. I could see Miller being used in that kind of role early with the Eagles.

Williams has great size and very good receiving skills. On the season, he has 58 catches for 588 yards and 4 TDs.

In his last four games, Zach Ertz had 35 catches for 450 yards and a touchdown for the Eagles. He showed down the stretch that he can be relied upon as the Eagles' starting tight end. That makes Brent Celek expendable. In 2015, Celek will count for $5 million against the cap, which is the 11th-highest cap total on the roster in 2016. That is wholly unjustifiable for a backup tight end. The Eagles should be looking to replace Celek with a cheaper developmental option if they cannot work out a pay decrease with him.

At ECU, Williams lined up as an in-line TE, an H-back, a FB and as a WR. He is a versatile player who can theoretically fit into any system.

Murphy is another intriguing OL prospect coming out of Stanford, where there have been a slew of them in recent years:

Murphy played RT for Stanford as a junior and moved to LT this past season. With Jason Peters' career winding down, Murphy could follow in the footsteps of Lane Johnson, who played both RT and LT at Oklahoma.

The Eagles could draft Murphy with the idea in mind that Johnson will move to LT whenever Peters is done in Philly, and Murphy can fill right in at RT. In the short term, he could serve as a swing tackle off the bench, which the Eagles presently do not have.

In 2014, former Indiana RB Tevin Coleman ran for 2036 yards on 7.5 yards per carry. He did so with the help of LT Jason Spriggs. When you watch Tevin Coleman highlight reels, you'll see all kinds of impressive blocks by Spriggs.

As a pass protector, Spriggs allowed just two sacks in 689 snaps in 2014, according to Brian Bennett of ESPN. Spriggs is also expected to test well at the Combine. Here are some measurables tweeted out by head coach Kevin Wilson:

Here is a good look at Spriggs' athleticism. Watch at the snap as Spriggs runs to a spot and walls off the Michigan State ILB (#34), eliminating him from the play from the back side and creating a huge run for Coleman:

Spriggs would have been a clear player of interest to the Eagles under Chip Kelly. I have no idea what the new staff will value.

Whitehair has positional versatility. He played RT, was moved to LG, then back to RT, and finally he has found a home at LT. At just 6'4, he'll probably have to move back inside to guard at the pro level, but will have experience on the edge in a pinch. Some believe he's a first round pick.

Alexander also has versatility, in that he has played both LG and RT for the Tigers. He has good size, he plays through the whistle, and you'll often see him bury opponents against their will, which is something the Eagles don't really have on the interior of their OL. However, I just didn't see a first-round guy here watching him earlier this season. There is nothing that really stands out about his game, as he has far too many missed blocks, and he is on the ground quite a bit. But ... the Senior Bowl is about watching the guys who did not initially impress, too.

Drango played at left tackle all four years at Baylor, but he may be better suited to play inside at the next level, as he often struggled with speed rushers. Drango did, however, bury defenders when Baylor ran the ball. From the Eagles' perspective, Drango might fit an immediate need if he can learn the guard spot quickly enough, while also doubling as a player who can kick out to tackle in a pinch.

Westerman is a former big-time high school recruit (27th in the country by Rivals.com), who is an athletic freak. Here he is benching 315 pounds 20 times.

He reportedly benched 225 pounds (the weight used at the Combine) 41 times. Westerman was formerly considered among the best guards in college football, but a number of analysts believe he had a down year. The Senior Bowl will give Westerman a chance to beef up his stock again.