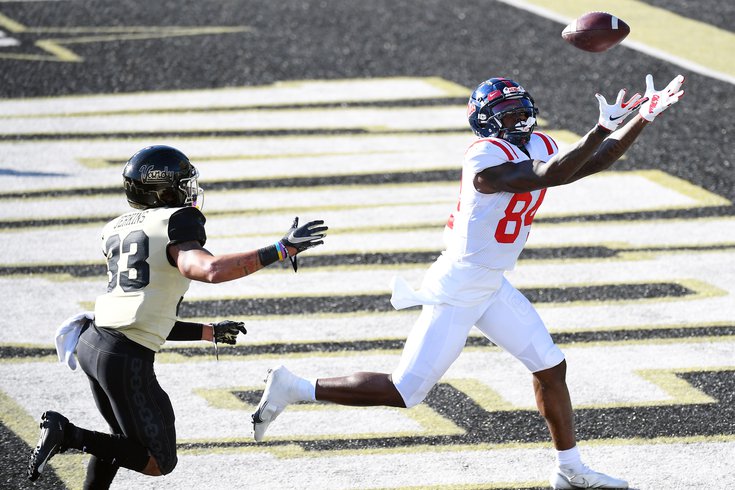 Let's just get right to them.

• Kenny Yeboah, TE, Ole Miss: Graduate transfer from Temple who broke out in his final collegiate season at Ole Miss, catching 27 passes for 524 yards (19.4 YPC!), and six TDs in seven games. He played a more traditional tight end role in college. In the pros he'll be more of a "move TE," AKA an F, and could pair nicely with Dallas Goedert.

• Rashad Weaver, DE, Pittsburgh: Weaver was thought of as a potential breakout player in 2019, but he tore an ACL, and he missed the entire season. In his return in 2020, Weaver was impressive, collecting 7.5 sacks in 9 games.

• Patrick Johnson, DE, Tulane: Johnson is a high energy pass rusher with burst who was third in the nation with 10 sacks. Since 2018, Johnson has 24.5 sacks, 6 forced fumbles, and 11 batted passes.

• Cameron McGrone, LB, Michigan: McGrone has good speed, and he can cover a lot of ground from sideline-to-sideline, or on drops into coverage. He has also shown the ability to time out blitzes, and get to the quarterback quickly.

• Dylan Moses, LB, Alabama: Moses was being recruited by LSU and Alabama when he was heading into eighth grade. He eventually landed at Bama as a five-star recruit, with prototypical size and athleticism. After strong freshman and sophomore seasons, he was heading into the 2019 season as the leader of the defense, and was being projected as a first-round pick, but an ACL tear in August of that year ended his season. In 2020, Moses was just OK, and was unable to regain his 2018 form. He is thought to "breathe football," even though he considered quitting football due to knee pain and the loss of his grandmother to COVID.

• Richard LeCounte III, S, Georgia: LeCounte is a ballhawking safety, as he had four INTs, two FFs, and three FRs in 2019. In 2020 he had 3 INTs in just 5 games. He is also smart, and well-liked by his teammates, coaches, and Georgia's media, and he has become a leader on the field, communicating calls and alignments to the rest of the secondary. Tackling was an issue.

• Trill Williams, S, Syracuse: Played outside corner, slot corner, and safety at Syracuse. Running a 4.59 40 means he'll be a safety in the pros, and he has the physicality play there. I like him as a third safety who can fill in at a number of spots, including covering bigger slot receivers.