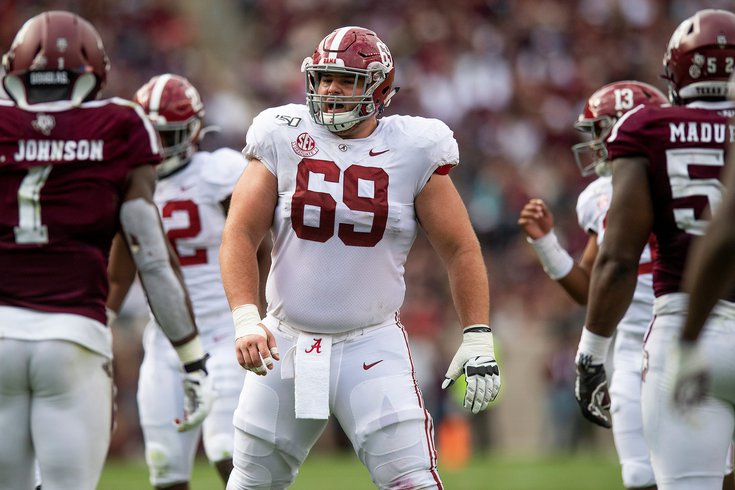 In Round 1 of the 2021 NFL Draft — or perhaps more accurately, going back as far as March — Howie Roseman and the Philadelphia Eagles did a masterful job of executing a pair of trades that landed them a first-round pick in 2022, while also acquiring a blue-chip talent in Alabama wide receiver DeVonta Smith.

Dickerson is a really good player who would have easily gone first round — maybe even first half of the first round — if not for a slew of significant injuries, listed here:

Some had him as a first-round pick anyway, largely because of his leadership qualities, toughness, nastiness, and versatility. In the National Championship Game, Dickerson came in and snapped in victory formation, less than a month after tearing his ACL.

You can see the respect he earned from his teammates in this video:

In college, Dickerson started at least one game at all five positions, but mostly at guard and center. His fit in Philly is likely to be Jason Kelce's eventual successor at center, long-term, and a guy who can fill in at multiple spots short-term.

There aren't any available starting spots open for Dickerson on this current Eagles roster, assuming an interior OL trio of Isaac Seumalo, Jason Kelce, and Brandon Brooks. In a season in which the Eagles won't be Super Bowl contenders anyway, that doesn't really matter much. In 2022 and beyond, there's a very good chance that Kelce or Brooks (or both) will be gone, so the Eagles are right in looking ahead to replace them.

Also, as you're all well aware, the Eagles had eleventy billion starting OL combinations due to injury last year, so assuming Dickerson will heal up in time to play in 2021, he will very likely be needed at some point during the upcoming season. It's not as if he'll redshirt, again, assuming he's physically able to play.

But to draft a player with the extreme list of injuries that Dickerson has suffered, and not even at a premium position, at pick No. 37? You don't take a swing on a player profile like that unless you believe he can be an All Pro-caliber player. Big risk, but a potentially big reward. I'd have taken someone else, but I can also respect the gamble. B-.

This pick will of course be remembered more for the negative reaction from the Eagles' draft room than the actual pick, when cameras caught Senior Football Advisor Tom Donahoe having no interested in Howie Roseman's fist bump, post-pick.

Asked about the awkward moment, Roseman didn't dispute that there was dissention on the pick.

"When we were at pick 70 there were a couple guys we liked on the board, and moved back a little bit to see how it would go," Roseman said. "Couple guys we liked went as well. You know, these guys spend all year scouting these guys and you get favorites, you get guys that you feel really strongly about. We all do. You know, that's the fun part about being in the draft room is the emotions of it.

"At the end of the day, Milton Williams is an exciting player for our football team. We’re excited to have him. You know, I don't want to take away from his day, but we're all excited about that pick."

To note, the Eagles originally held the 70th overall pick. They traded back to pick 73, and picked up a sixth-round pick, of which they already had three. The three players that got picked in the interim were as follows:

But certainly, the dissension in the Eagles' draft room, shown on national television, will do nothing to quell the criticisms detailed in pieces from The Philadelphia Inquirer and The Athletic earlier this offseason that painted a picture of organizational dysfunction, and a lack of collaboration.

Personally, I like Williams' profile more than any of the three players that got picked before him. He's as athletic (at his position) of a player as you'll find in this draft, as the following spider chart shows:

Williams was also productive the last two seasons, registering 10 sacks in 22 games from his DT position. Give me the upside of that guy over a player like McNeill, for example, who is more of a short, squatty DT in the mold of Javon Hargrave.

Grade on the actual pick: B.

Concern over what the cameras caught: 😬