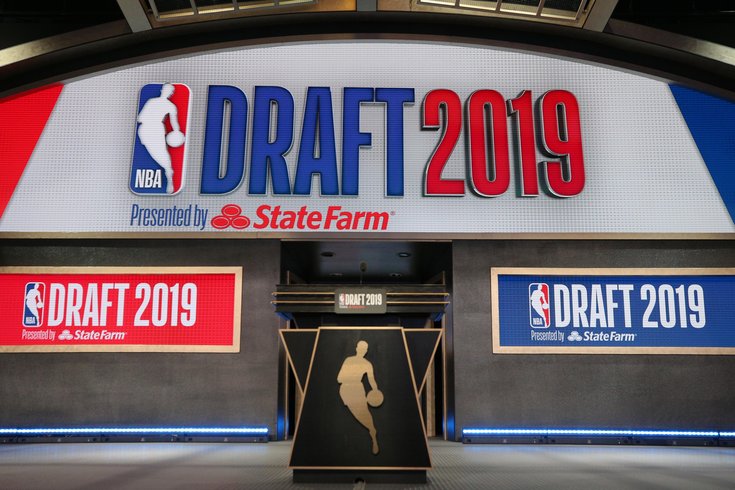 General view of the stage and podium before the start of the 2019 NBA draft at Barclays Center.

The 2019 NBA Draft has arrived, and despite not picking until 24th overall, it should be a busy night for Elton Brand and the Sixers.

UPDATE 2 [10:50 p.m.] — The Sixers made another trade, sending Jonathan Simmons and the 42nd pick to the Wizards for cash considerations. But that might not be a good sign for those hoping to see the Sixers run it back...

Jonathon Simmons and 42 are headed to Washington for cash considerations, team source confirms.

Ostensibly, it's about summer cap, but I am interested to see what exactly they plan to do with an extra $1 million.

UPDATE 3 [11:25 p.m.] — After the Celtics selected Carsen Edwards with the 33rd pick (originally held by the Sixers), Elton Brand made another trade, sending the 34th pick to Atlanta for the 57th pick and a pair of future second-round picks.

We're going to stop updating every pick for the night, but you can following along below with live updates...

In addition to that first-round pick, the Sixers also have four a pair of second-round picks. Here's a look at their full slate of selections, which could change at a moment's notice if Philly decides to do some draft night dealing [which they did, moving up four spots to select Thybulle and sending the 42nd pick to Washington]:

This will be Brand's first draft as general manger and the former power forward has already said publicly that the team is looking for a player who can make an immediate contribution to their rotation. Who that player will be remains to be seen, as the Sixers have seen a ton of players work out in the weeks and months leading up to the draft.

Here's a look at some of our draft coverage to get you ready for tonight:

• Neubeck: Some guys I like (and dislike) more than consensus for Sixers
• NBA Mock Draft roundup: Is Cameron Johnson the favorite for Sixers at No. 24?
• Sixers have their work cut out for them picking at No. 24
• Elton Brand, Sixers looking for prospects who can contribute to title push
• NBA Draft 2019: A running list of prospects the Sixers have seen workout this spring
• Should Sixers consider drafting any players with injury concerns?

Plus, here are Kyle Neubeck's notes from the Sixers draft workouts he attended:

• Could a Euro stash be in the cards for Philly?
• Grant Williams, the NBA Draft's renaissance man, is worth considering for Sixers
• Is Dylan Windler's shooting enough to warrant a selection?
• Carsen Edwards unfazed by height concerns heading into NBA
• Tobias Harris' brother Terry says he's unaware of star's free agency plans

For all the latest picks and up-to-the-minute analysis, follow along in our live chat starting at 7 p.m. — with the first pick expected to take place around 7:30 p.m. — and be sure to leave your own reaction in the comments section below.