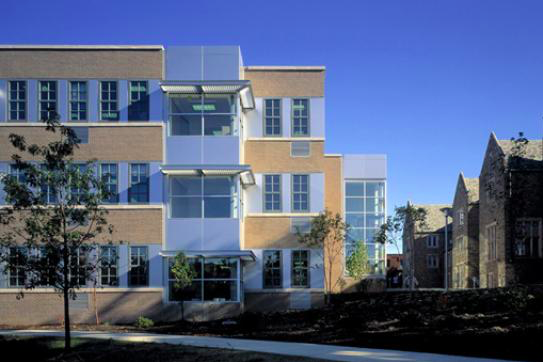 Three Philadelphia schools were honored this week as recipients of a 2016 National Blue Ribbon, joining 349 other schools across the nation recognized for overall academic excellence or marked progress in closing achievement gaps.

Established by the U.S. government in 1982, the program is tailored to identify outstanding schools that represent the full diversity of American locales and learning environments. Its standards of excellence factor in both student-based achievement measures and research-based indicators of school quality.

"It's a very exciting opportunity to come into a school that is high-achieving and has the partnerships we do," said Penn Alexander principal Michael Farrell, who accepted the baton from the school's founding principal, Sheila A. Sydnor, at the start of the academic year.

Created in 2001 under historic circumstances, Penn Alexander is a collaboration among the University of Pennsylvania, the School District of Philadelphia and the Philadelphia Federation of Teachers (PFT). Envisioned as a public-private partnership, the K-8 public school aims to build a model university-assisted program that carries on the impact of Civil Rights pioneer Sadie Tanner Mossell Alexander. It serves about 550 students.

In Philadelphia, where much of the educational conversation gets mired in budgetary woes, labor negotiations and demographic inequality, these three prestigious awards, all designated for progress in closing achievement gaps, stand out as a beacon of local promise.

Unquestionably, all three K-8 schools differ substantially from the majority of public schools that serve Philadelphia students. In an election year, however, and as the nation takes stock of the Obama administration's legacy in the classroom, the schools offer valuable lessons that can be adopted elsewhere.

"I think for any organization, you have to have a very clear mission statement," said Pheng Lim, principal at FACTS. "Who are you and what are your brand promises to families and students matters. It has to be a compass for the decisions that are made."

FACTS, like Penn Alexander, is somewhat unusual compared to most Philadelphia public schools — but it's not because the student population has a comparative economic advantage. FACTS receives federal funding because a large share of its 470-or-so students — about 70 percent of whom are Asian children — come from low-income families, Pheng explained.

Many parents and critics of education policy lament the fiercely competitive admissions process that limits entry into charter schools, particularly students with special needs, and devotes major district resources toward their operators when outcomes on the whole are a mixed bag.

The pros and cons of public and charter schools, as well as disagreement about a state or district's ideal balance between the two, can ultimately answer many important questions about what makes a great school, period. Other factors stemming from the crucible of urban socioeconomics can help better guide the use of academic resources and counseling to mentor kids who need help.

"Our student population has about a 53 percent poverty rate," said Jeanne Meredith, who has been principal at St. Mary Interparochial School for the past 15 years. "It doesn't matter how much money you have. Everybody is going to be educated in the same manner. We have children from 41 zip codes."

St. Mary is Archdiocese of Philadelphia school but is not subsidized by a parish. Resources for its 255 students are limited by its fiscal independence. Beyond its Catholic values, Meredith agrees with Pheng that mission-driven schools have the greatest likelihood of excelling academically and socially.

"We have a mission statement that we recite together every morning as a school community," Meredith said. "Our faculty, our school community and our parents are all deeply invested in our students' progress."

"I would never want to simply claim how schools should be fixed," Farrell said, "but I think there's something to be said for collaboration and partnerships becoming a big part of a school's success."

Together with Pheng and Meredith, Farrell recently completed a professional development program at the Philadelphia Academy of School Leaders. He wants to see more teachers work with the PFT and other organizations to bolster leadership that can translate into educational outcomes.

"We're very open to partnering with teachers and other schools," Farrell said.

At FACTS, where Pheng became a founding member in 2005, the path to a Blue Ribbon was about striking the right balance between different kinds of learning and enrichment.

"When we met with [Superintendent Dr. William Hite] and his team members, we all said that schools have to pause with the academics sometimes. You have to have a balance with soft and social skills," Pheng said. "It's hard to find, but you have to carve it into the daily schedule. That's been one of our keys to success in the long-run."

At Penn Alexander, Farrell emphasized the school's mission of social justice that brings students and faculty together behind the achievements of Sadie Alexander.

"I told our students today, she received so many awards during her education and through her impact on the community, but she never let that stop her from looking forward to what's next," Farrell said. "This honor gives us a charge to continue great work and reflect on the next goal to achieve."

And it truly is an honor.

Pheng received a congratulatory letter from one parent who told her she nearly burst into tears when she received school's recorded message announcing the award. With a whole school year ahead of her, however, the Blue Ribbon only reaffirms what works for FACTS. It takes everyone's contributions and commitment.

"This morning, when we did our rally, it was all about the collective effort for any hopes or dreams to be realized," Pheng said.

This is especially important for FACTS, which prides itself so centrally on school diversity that cultural contrast is a fundamental aspect of the curriculum. Students there are encouraged to understand themselves first and foremost so that they can learn to understand and appreciate everyone else.

"Our school mirrors society in that it's multiracial and multiethnic," Pheng said. "That was deliberate for us. It gives our students multiple perspectives and viewpoints. That's how the world works, especially cities. You have to be among people other than you to have empathy and compassion for others."

The school's program's include ensembles, electives and residencies celebrating everything from African and Indonesian dance to Chinese opera.

"That's something unique and beautiful about our school," Pheng said. "We have this community of knowledge and different ways of learning. There are multiple ways of gauging what learning is."

All three Philadelphia principals know that the Blue Ribbon distinction doesn't miraculously eliminate problems or automatically solve those faced by their schools and others.

"You always have to pay attention to students at the margins — those in special education, ESL, kids with mental health issues," Farrell said. "There's still work to do for us, but it shows that with the right collaborative environment and model, a school can build an example for best practices."

"We're thrilled by the award and know it will propel us to move forward," Meredith said. "We'll keep striving to do our best with the mission we believe in."

Pheng looks at the landscape of education beyond Philadelphia and sees a system in need of greater freedom and respect for teachers.

"We have to make sure that we treat educators as professionals. We have to give them more autonomy to shape the culture and climate of learning," Pheng said. "If you allow teachers to do what they were trained to do well, to have collaboration work as something deeply rooted in the school, magic will happen."

To get there, it will take an emphasis on teachers' powerful role as adults who build trust and confidence in students, Pheng believes.

"They are the people who are making the big difference," Pheng said. "As school leaders, we have to encourage them."