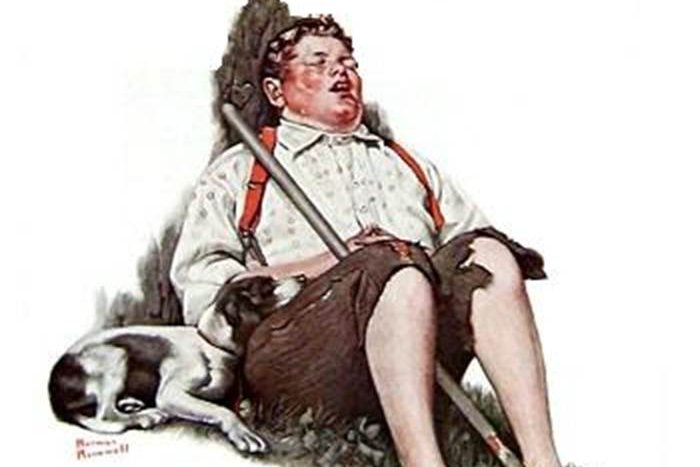 This 1919 Norman Rockwell painting, known by several titles, including "Boy Asleep with Hoe," has been missing for four decades after it was stolen from a home in Cherry Hill, Camden County.

A $600,000 Norman Rockwell painting stolen 40 years ago today from a South Jersey home remains missing, and the FBI is hoping the public can help find it.

The painting, known by several titles, including "Boy Asleep with Hoe," "Taking a Break" and "Lazybones," was taken from the wall of a Cherry Hill home during a break-in on June 30, 1976, authorities said. The artwork, oil on canvas, about 25 inches by 28.5 inches, was featured on the Sept. 6, 1919 edition of the Saturday Evening Post.

The FBI Art Crime Team and the Cherry Hill Police Department are seeking information about the theft or current location of the painting, which was been entered in the FBI’s National Stolen Art File, and Interpol’s Stolen Works of Art Database.

Anyone with information is asked to contact the FBI at 215-418-4000, or submit details to tips.fbi.gov; tipsters can remain anonymous.

The masterpiece was taken during a burglary at the home of the late Robert and Teresa Grant, and discovered days later when the family returned from a vacation to Ocean City, the Inquirer reported in November 2013.

When their father died in 2004, his children, John Grant and his sister, Sue, promised to keep searching for the family heirloom, with assistance from a retired FBI art theft expert, Bob Bazin, CBS3 reported in March 2013.

Bazin told the news station then that the Rockwell painting is quite possibly still in the area, maybe even possessed by someone who doesn't know it was obtained via crime.

Norman Percevel Rockwell, who died at 84 in November 1978, gained immense popularity with his works detailing American culture. His illustrations of daily life adorned the cover of the The Saturday Evening Post magazine for 50 years. One of his most famous works, "Saying Grace" sold at auction for $46 million in December 2013 – a record for works by the beloved artist.