Taff has been with Action News for 13 years. Gardner's final broadcast will be Dec. 21 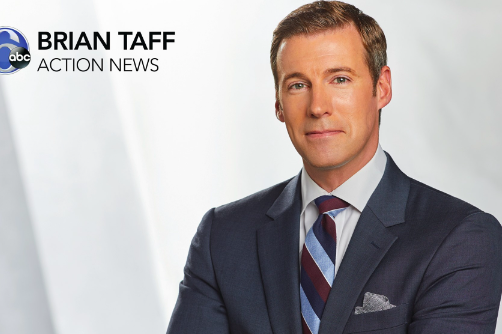 Ahead of 6ABC anchor Jim Gardner's retirement later this month, the station has named Brian Taff to replace him on the 6 p.m. newscast.

Action News anchor Jim Gardner officially retires at the end of this month after working at 6ABC since 1976, and the station has picked Brian Taff to take over the station's 6 p.m. newscast.

Taff, who has worked at Action News for 13 years, currently co-anchors the noon and 4 p.m. newscasts with Sarah Bloomquist. Upon taking over for Gardner, he will remain on the 4 p.m. team but will leave the noon anchor chair.

6ABC made the announcement about Gardner's 6 p.m. successor on Tuesday. Rick Williams was chosen to take over the 11 p.m. newscast back in January.

"During my time at Action News, Jim Gardner has become much more than a mentor to me — he's been a dear friend, a trusted confidant, and a guide for which I'm unendingly grateful," Taff said. "He will never be replaced on Action News at 6, but it's the professional honor of a lifetime to be asked to succeed him."

Gardner, 74, announced his retirement in November 2021 and has since scaled back his schedule. He last appeared on the 11 p.m. news in January, and will co-anchor his final 6 p.m. newscast on Dec. 21.

The four-decade Action News veteran expressed his approval of Taff as his successor on Twitter Tuesday morning.

I couldn’t be happier for ⁦@briantaff6abc⁩, for his ⁦@6abc⁩ colleagues, and most importantly for our viewers. Brian is the consummate broadcast journalist. With Brian at 6 and ⁦@rickwilliams6⁩ at 11, my hangout spots are in great hands! https://t.co/MVY6eHop9K

"Brian is the consummate broadcast journalist," Gardner wrote. "With Brian at 6 and ⁦(Rick Williams) at 11, my hangout spots are in great hands!"

Taff, who spelled his last name Taffe at previous jobs, joined 6ABC in 2009 at the age of 30. He is a native of Delmar, in Albany County, NY, and graduated from Bethlehem High School and Boston College. Taff began his career in broadcast journalism in Bangor, Maine at WVII-TV, before becoming a weekend anchor and reporter at Capital News 9 in Albany. He went on to serve as anchor and editor of Capital Tonight, a nightly news and interview show in upstate New York, for which he won the Associated Press Award for "Best Interview" two years in a row.

RELATED: Jim Rosenfield is leaving NBC10 after nine years with the station

During his time with 6ABC, Taff has reported on assignments throughout the tri-state area and around the world. He traveled to Florida and Alabama to cover the BP oil spill, to Rome during the process of electing Pope Francis and to the White House to speak with President Barack Obama during his first term.

Taff is known for having a deep, authoritative voice while delivering the day's news, leading to commercials like the one below, in which he is dubbed "the voice you know for news."

Taff took to Facebook on Tuesday to reminisce on the call he shared 13 years ago with the vice president of news at 6ABC, who told him he got a job at the studio. He expressed his gratitude for everything that's happened since.

"The baton I am being handed from (Jim Gardner) has been used to orchestrate the decades-long construction of our foundation ― one built on honesty, integrity, and trust," Taff wrote. "I intend to honor and build upon that legacy with every single word, every single night."