LAKELAND, Fla. – Aaron Nola rode the adrenaline of his first start in seven months and the excitement of being healthy to an impressive performance in his first (and albeit short) game of the spring last week in Dunedin, Fla., against the Toronto Blue Jays.

On Tuesday in Lakeland, things did not go quite as easily for Nola. The 23-year-old right-hander battled through a laborious two-inning outing when the Phillies took on Justin Verlander and the Detroit Tigers.

Nola pitched the same number of innings as he did five days earlier, but needed 10 more pitches (40 total) than his first start, which prevented him from going the three innings the team would have liked to see in his second game of the Grapefruit League schedule. Six of the 11 batters Nola faced reach safely on a hit or a walk.

“I was spotty today,” Nola said.

Nola allowed two runs on five hits while striking out two and walking one.

"Nola looked a little rusty," manager Pete Mackanin said. "He wasn't as bad as you think he was. (Catcher Ryan) Hanigan told me a lot of those pitches were pretty good pitches."

“My fastball command way (was off),” Nola said. “I (threw a) hanging curveball to (Nicholas) Castellanos (for an RBI single). I was kind of missing over the plate on some pitches but other than that I felt good. My arm felt good, my body felt good.”

As he enters his first season since missing final two months of 2016 with an elbow strain, Nola will continue to have to prove that his arm is healthy.

The Phillies still have 24 more exhibition games remaining in Spring Training. Nola will still have at least four or five more tests, with each becoming a little more demanding with each start with increasing numbers of pitches and innings.

But according to Nola, health wasn’t a factor Tuesday. He just had a bad day commanding his pitches.

The damage on Nola’s final line could have been worse if Justin Upton didn’t bounce into a rally-killing, inning-ending 5-4-3 double play to end the first inning.

“I want (my command) to be there all the time,” Nola said. “I’m always working on my delivery, trying to repeat it the best as I can and try to command the ball as best I can every single outing even early in spring training.”

With Roy Halladay watching from behind the cage, right-handers Zach Eflin and Jake Thompson both took important steps to getting into their first Grapefruit League games of the spring.

Both Eflin and Thompson threw live batting practice sessions on Tuesday morning; it was the first time either had thrown to hitters since camp opened three weeks ago. Thompson came into camp slowed by a right wrist injury while Eflin dealt with some swelling in his right knee during the first week of workouts.

“I’m head over heels better than I’ve ever felt in my life,” said Eflin, who underwent surgery on each of his knees after being shut down last August. “I can’t remember the last time that I felt like this. It’s just a blessing.” 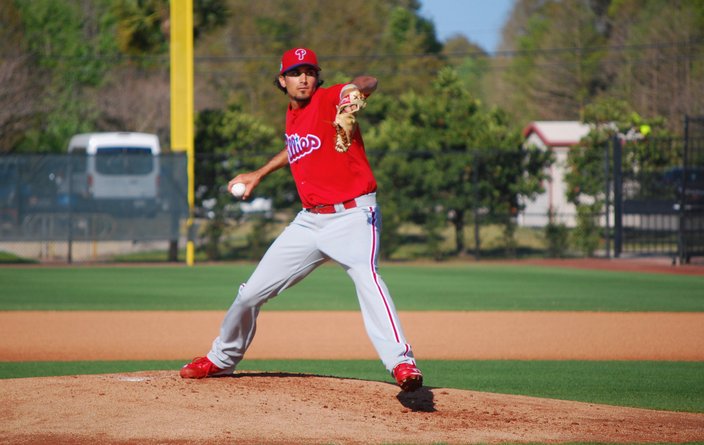 Zach Eflin threw to hitters for the first time this spring on Tuesday morning. Eflin, who underwent surgery on both of his knees since being shut down last August, will likely throw one more live batting practice session before being cleared for games.

Eflin, who had dealt with knee pain since he was an adolescent, is likely to throw in at least one more live BP session before pitching in either a Grapefruit League game with the Phillies or a game in minor league camp. But the 22-year-old is confident his knee trouble is a thing of the past.

Thompson, meanwhile, said he had to knock off “a little rust” before getting going on Tuesday morning at the Carpenter Complex. Like Eflin, he’s about 2 1/2 weeks behind the rest of the starting pitchers in camp.

“Physically, I’m ready,” the 23-year-old Thompson “It’s just about getting the reps so I can be comfortable with it.”

Thompson hopes to pitch in his first game of the spring early next week, meaning he’s also likely to throw an additional live BP session before getting cleared for a game. With a month until the regular season, both Thompson and Eflin should age time to catch up in reps.

As long as everyone in camp remains healthy, Eflin and Thompson will start the 2017 season in the Triple-A Lehigh Valley rotation. Both were pushed out of the Phillies rotation this winter when Jeremy Hellickson returned and the front office traded for fellow veteran right-hander Clay Buchholz.