Abington High School beefs up security in response to #AbingtonFightWeek 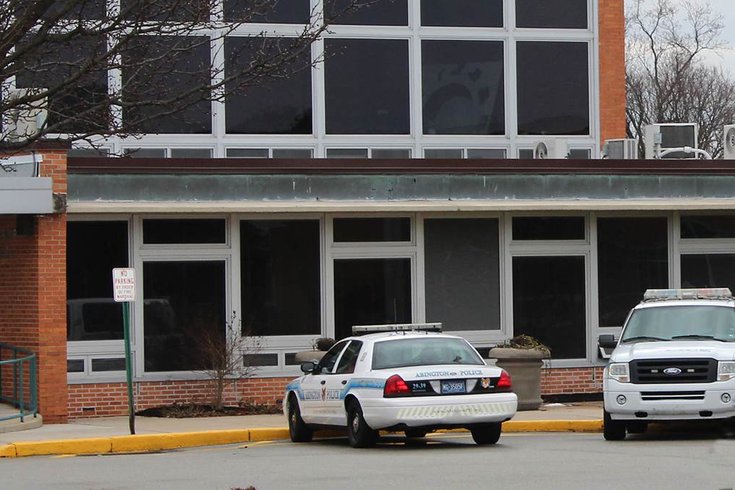 Two of three Abington Township police vehicles parked at Abington Senior High School on Thursday morning. Some students have proclaimed it #fightweek on social media. Students also say there were between eight to 12 fights at the school since last Friday.

A number of student fights at Abington Senior High School has prompted the Abington School District to increase police presence across its main campus.

Five fights involving students were reported this week, including one in which a student punched a school resource officer, Superintendent Amy Sichel said in a letter posted Thursday on the district's website. No students or staffers have sustained injuries, the letter said.

Students have chronicled the fights on social media, some reporting as many as a dozen altercations since Friday, using an #AbingtonFightWeek hashtag and establishing an Abington Fight Club page on Instagram, since taken down. Sichel said district officials and police are monitoring social media, where varied unsubstantiated claims have swirled, including rumors of a knife fight to take place Thursday.

"THERE HAVE BEEN NO WEAPONS INVOLVED," Sichel wrote in her letter, adding that the district has had many social media posts taken down. She did not immediately return calls seeking additional information.

Multiple social media reports indicated that there was at least one arrest after an incident on Monday, but Abington police did not respond to a request for more information about the situation this week at the school. 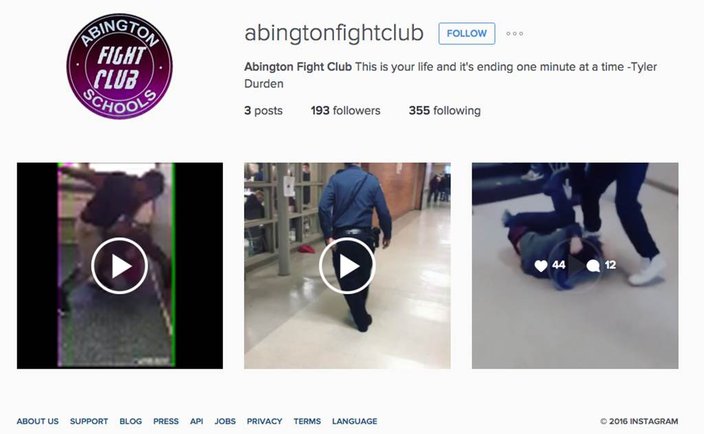 The #AbingtonFightClub Instagram page, before it was taken down, featured three videos of fights, purportedly at the school.

Students who engage in fighting face a range of "stern, school-based consequences" that include expulsion, Sichel wrote. If necessary, criminal charges will be filed by police. Those penalties will be given after the school concludes its investigation.

Before it was taken down on Thursday, the Abington Fight Club page on Instagram featured three videos of altercations apparently filmed at the school.

One of the videos showed a student punching another student to the floor, before kicking him and then grabbing, lifting him up and throwing him backward to the floor again. At that point, a school resource officer can be seen rushing to the scene and tackling the fighting student to the ground. The video ends at that point.

There was an obvious police presence on Thursday morning at the Montgomery County school, located on Highland Road. Two police cars were parked by an entrance at the rear of the school and another officer was on patrol in the adjacent parking lot. Otherwise the school seemed quiet.

But chatter continued on social media, where parents have expressed safety concerns.

John Spiegelman, an Abington Township Commissioner, attempted to quell those fears on Facebook by stressing the increased police presence and quick intervention by school staffers. He also noted that teenagers have been fighting for years, saying parental fears expressed on social media blow the situation out of proportion.

"These precautions are what we do when we have heightened issues at any school. Unfortunately the use of social media blows these situations out of proportion and sensationalizes the matters, which only adds to the issues." – Amy Sichel, Abington superintendent

"This is the downside to social media," Spiegelman said in an interview on Thursday. "It can bring people together. It can encourage people to help one another when they're down. But at the same time it can be used to tap into the basis of the reptilian instincts and just gin up fear and panic."

Spiegelman, the father of a seventh-grade student at Abington Junior Hich School and the husband of a teacher in the district, encouraged parents to recognize the efforts being taken by an "unparalleled police department" to ensure safety and penalize perpetrators.

"That reaction imparts a lesson to your kids that is actually going to have a deeper impact on them than the lesson that you tell them you want them to take away," Spiegelman said. "It's important to say that you've got to make good choices. But the way you react to adversity ... is going to send a lesson to your kids."

Student fights have been subdued by administrators, school resource officers and security guards, Sichel wrote in her letter. No additional police intervention has been necessary.

Nevertheless, police cars will circulate the main campus. High school staffers are expected to report any rumor or concerns to Principal Angelo Berrios, who sent a recorded phone message to parents Wednesday night. Students were instructed Thursday on the school's social media policies.

"These precautions are what we do when we have heightened issues at any school," Sichel wrote. "Unfortunately the use of social media blows these situations out of proportion and sensationalizes the matters, which only adds to the issues."

Sichel encouraged parents to discuss the matter with their children and monitor their social media activity.