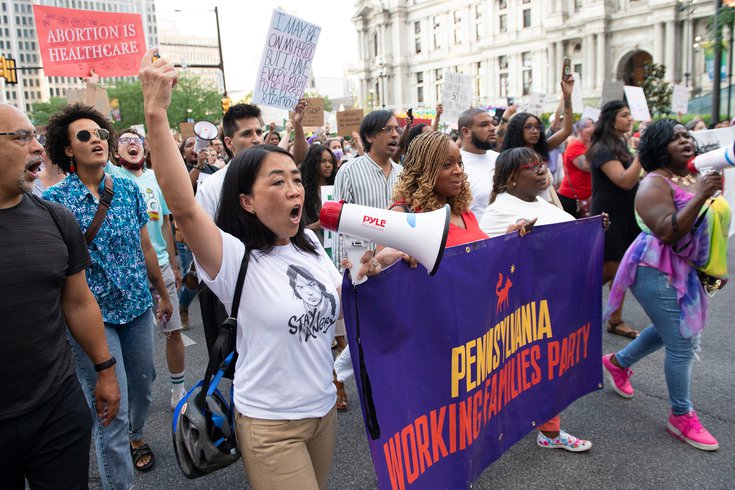 City Councilmembers Helen Gym, Jamie Gauthier and Kendra Brooks introduced legislation on Thursday that aims to bolster rights for those seeking and providing abortions in Philadelphia. Pictured above are the councilmembers marching on June 24, the day the U.S. Supreme Court overturned Roe v. Wade.

Three members of City Council have unveiled a trio of bills aiming to strengthen abortion rights and medical privacy for anyone seeking or providing the procedure in Philadelphia.

Councilmembers Helen Gym, Jamie Gauthier and Kendra Brooks introduced the Reproductive Freedom Package on Thursday, which was accompanied by a call to action on the city's government to expand and protect abortion access.

The move is one of many throughout the country, as state and local governments have sought to expand or restrict abortion access in the wake of the U.S. Supreme Court's decision in Dobbs v. Jackson, which made its legality a matter of state law.

Since the Supreme Court's decision came down less than three months ago, 14 states have moved to place full or partial bans on the procedure. Abortion remains legal in Pennsylvania up to 24 weeks gestation.

Gym's bill prohibits the voluntary sharing of information that could be used in a criminal case or civil lawsuit to penalize a person for seeking care that is legal in Pennsylvania. If passed, a court order would have to be filed in order for that information to be disclosed.

"Our city will always stand in defense of abortion access and reproductive rights," said Gym. "This legislative package was shaped by the people serving on the frontlines of this crisis — reproductive justice organizations, medical providers and advocacy groups. With this package, we will bring them the protection and privacy that they need to provide essential health care, and deliver further protections for all people seeking care within our city."

The legislative package looks to protect those seeking or providing abortions in Philadelphia from "the ripple effect of state abortion bans throughout the entire region," said Kelly Davis, executive director of advocacy group New Voices for Reproductive Justice. The bill already has support from five additional members of City Council.

Gauthier's bill would protect abortion patients and providers in Philadelphia from "vigilante" lawsuits filed by residents from other states. These lawsuits have occurred in Texas, where one of three abortion bans in the state allows citizens to sue those who provide the procedure to patients after six weeks gestation.

Today, Philadelphia sends a message to the entire country: we will always stand up for reproductive justice and in defense of abortion access. Proud to stand with my sisters @CouncilmemberJG and @KendraPHL today. pic.twitter.com/cRr3vJTILW

The bill is similar to one passed in New York earlier this year after the Supreme Court overturned the 1973 landmark case Roe v. Wade. Gauthier noted that the legislation has a clear message for anti-abortion activists: "hands off."

"The right to abortion is one of our most essential freedoms, one that allows us to govern our bodies and the course of our lives," said Brooks. "As a Black woman, a mother, and someone who has had an abortion, I'm proud to co-sponsor the Reproductive Freedom Platform for Philadelphia to ensure that every person in our city is in control of their bodies, lives, and futures."

This is not the first time that city officials have noted their support for abortion rights. In August, Philadelphia sent $500,000 in emergency funding to the Abortion Liberation Fund of Pennsylvania, which provides resources and financial assistance to people seeking abortions in the state.

In July, the state's Republican-controlled Congress approved an amendment to Pennsylvania's constitution that would declare there is no right to an abortion. The amendment could reach the ballot for a referendum vote as early as May 2023 if it's approved again by both houses of Congress early next year.

The councilmembers' announcement came one day after U.S. Sen. Lindsay Graham, a Republican from Georgia, introduced a bill to prohibit abortions nationwide after 15 weeks gestation. Graham said on Tuesday that his bill is meant to prohibit "late-term" abortions, a non-medical term used almost exclusively by politicians.

The bill, which received criticism and speculation from Democratic and Republican lawmakers, is based on claims that fetuses have the capacity to feel pain by that period of gestation. The American College of Obstetricians and Gynecologists notes that "the science conclusively establishes that a human fetus does not have the capacity to experience pain until at least 24-25 weeks."

The bill has exceptions for rape, incest and life of the mother. It does not include exceptions for fetal abnormalities that can impact life, in part because some tests do not occur until after 20 weeks gestation.

For those looking for ways to track the status of abortion legality in the United States, The New York Times has a map that tracks proposed, passed and enacted bans in states throughout the country.