Akia McDowell was set to undergo a procedure on her esophagus when she became pregnant. That altered the equation, but one year later, she has a healthy baby and fewer achalasia symptoms 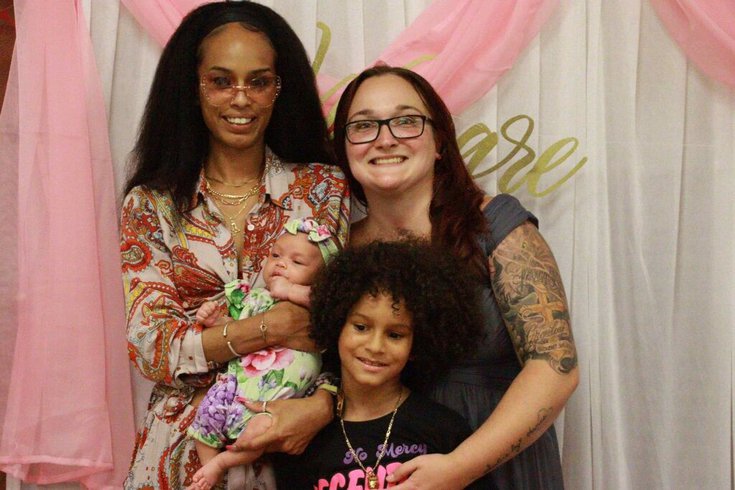 Akia McDowell, top left, suffered from achalasia, a rare digestive disorder, for years before undergoing a POEM procedure at Jefferson Health while pregnant. The non-invasive surgery alleviated the worst of her digestive symptoms. Also pictured, her son, Kingston, and daughter, Ohana.

For years, Akia McDowell had been told she had gastroesophageal reflux disease, a common – yet unpleasant – digestive disorder in which stomach acid backs up into the esophagus.

Then, one day in early 2011, the situation worsened after a night out with friends.

"The next morning, I wake up and I can't swallow food," McDowell recalled. "It won't go down. It's just feeling like everything is piling up in my chest. I'm feeling real weak and lethargic."

But in many ways, her journey was only getting started.

It took nearly another decade before McDowell arrived at a point where she could mostly eat as she once did, enjoying the likes of ice cream, red meat and chili cheese pots without painful aftereffects. And it involved being the first known pregnant woman with achalasia to undergo a peroral endoscopic myotomy, a relatively new surgery known as a POEM procedure.

Having endured it all, McDowell, 37, of Swarthmore, Delaware County, is sharing her story in hopes of inspiring others struggling with achalasia and raising awareness about the condition.

"That's what I would like to be – to be an advocate, to show them that it may be different," McDowell said. "You may not know what's going on, but if you have faith and put your faith in people who do the job that they love ... you can get good results, like me. You just have to be positive, but it can happen."

The long road to a POEM procedure

After her achalasia diagnosis in 2011, McDowell was placed on a liquid diet for several months as doctors sought the best treatment. Pneumatic dilation – a nonsurgical procedure to enlarge the opening of the esophageal sphincter – and Botox injections to relax the muscle were ruled out.

They opted for a heller myotomy surgery, in which a surgeon cuts a hole at the lower end of the esophageal sphincter to allow food to pass into the stomach. She also received a fundoplication, in which the top of the stomach is wrapped around the lower esophagus, creating an anti-reflux valve to guard against GERD.

For several years, these procedures allowed McDowell to live a relatively normal life, though she had some limitations. Eating too late could lead to indigestion and getting sick overnight. She couldn't eat too soon in the morning, either.

Three years ago, she found food wasn't going down as easily as it once did. She was vomiting more often. By 2020, she was so sick that she stopped working.

"I would stay in the house for four or five days in the bed because I was just out of it," McDowell said. "I couldn't eat. I was throwing up almost every single thing, even water. I wasn't able to keep anything down."

McDowell began seeing Dr. Alexander Schlachterman, a gastroenterology specialist at Jefferson Health. After a series of tests, he recommended a POEM procedure, a noninvasive surgery that creates incisions in the lining of the esophagus and at the lower end of the esophageal sphincter, opening it up. 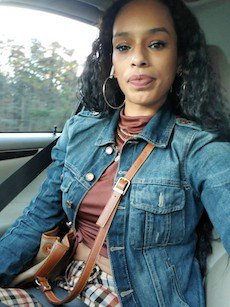 Akia McDowell went years believing she was suffering from gastroesophageal reflux disease, but she actually had achalasia, a digestive disorder that makes it difficult for food and liquid to pass through the esophagus and into the stomach.

For McDowell, the muscle of the esophagus was no longer the issue. Rather, the scar tissue from her prior operation had essentially created a pinhole from her esophagus to her stomach, Schlachterman said. Food "just wasn't clearing the esophagus."

And it was creating severe symptoms. McDowell's Eckardt score, which considers swallowing issues, regurgitation, chest pain and weight loss, was an 11 out of 12.

POEM has become the preferred approach of many esophageal experts since it first was used in 2008, because it combines the durability of surgical myotomy with the benefit of a minimally invasive procedure.

"The chances they'll need another procedure afterward is very low," Schlachterman said. "It's really just about lifestyle modification, making sure that they know this is a lifelong disorder and that, if they eat right, sit up after eating, take their acid suppressing medication, then there's a very low likelihood of needing anything."

McDowell's surgery was set to take place Oct. 17, 2020. But three days after it was approved, she learned she was pregnant with her second child.

The news of the pregnancy tossed a wrench into the plan.

For one, many doctors hesitate to operate on pregnant woman, fearing the potential impact on the unborn child. There often are concerns about the use of anesthesia, the side effects of medications and the possibility of compromised blood flow to the pregnancy.

And in McDowell's case, the POEM procedure had never been done on a pregnant woman.

"From our situation, what we want to do, obviously, is minimize any type of intervention while a woman is pregnant," Schlachterman said. "Not only the risks for the patient, but the risks for the baby. If we can avoid that, ideally, we'd love to do this when a woman is not pregnant."

A multi-disciplinary team worked to chart the best course forward. The non-surgical options weren't desirable. The doctors could keep McDowell on a liquid diet. They could provide nutrition through an IV. Or they could insert a feeding tube.

"There's certainly risks associated with those conditions, but just on a human level, that's miserable," said Dr. Laura Felder, who was involved with Akia's care as a nurse practitioner on the Maternal-Fetal Medicine team. "To not be able to eat anything by mouth, that's an awful thing to subject somebody to for a full pregnancy."

Additionally, McDowell's insurer, which had required medical necessity letters to approve the surgery, now declined to cover it. But she met the criteria for a process that assists patients with financial need.

McDowell came in for the procedure on Dec. 31. She was 17 weeks pregnant, in the second trimester, the safest time to use anesthesia during pregnancy. She wanted the surgery, but was concerned about its effect on her unborn baby.

"I was so scared and nervous, but Dr. Schlachterman was right there, making fun of me and talking about my makeup running," McDowell said. "He was just making me feel comfortable and relaxed."

The surgery went well. By February, McDowell said she was feeling great and headed back to work. But then she began experiencing GI issues again due to the pregnancy. She struggled to keep food down and she wasn't gaining much weight.

"Her weight gain was still quite limited," Felder said. "She did end up with fetal growth restriction, which is a condition where the baby measures small. Then she underwent a 37-week delivery, had a repeat C-section. She did well; the baby did well."

During the Caesarean section, McDowell could not lay flat on her back due to her achalasia. Instead, doctors placed her at a 35-degree angle. And they made sure she didn't receive any medications that would affect her stomach.

The baby, named Ohana Blou McDowell-Acevedo, was five pounds – "peanut size," as McDowell said. But Ohana was healthy and has continued to meet her milestones.

And with the baby delivered, McDowell's digestive symptoms finally calmed down.

"It was like a relief," McDowell said. "When they say a weight off your chest, it was kind of literally like that. A pressure off of my chest, because it would feel like pressure. If you think of stuffing balls into a sock, it's just piling up and up and up. And that's what it would feel like in my chest." 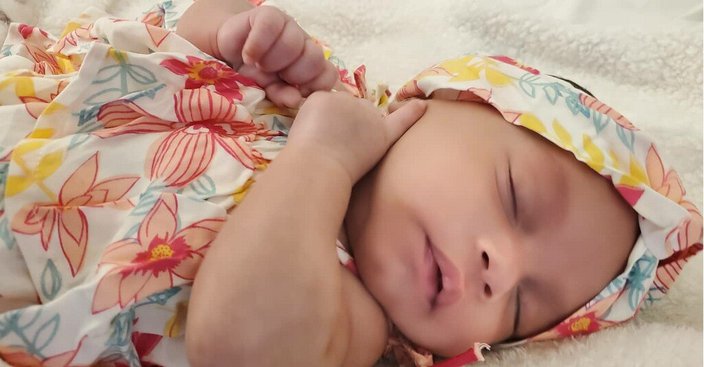 Akia McDowell gave birth to her daughter, Ohana, in May. Earlier in her pregnancy, McDowell struggled to keep food down and gain weight due to her achalasia. Though Ohana measured small, she was born healthy and has continued to hit milestones, McDowell says.

Now that her GI symptoms have been alleviated, McDowell said she is noticing the wider effect they had on her life. Her eating difficulties often left her depressed and reluctant to venture out to family BBQs and other gatherings. She found it embarrassing that she couldn't eat food like other adults and grew tired of remarks about her skinniness.

"You know how they say hangry?" McDowell said. "I think I was just hangry all the time because I would eat, but I'd still feel hungry, because it wasn't going in there."

Now, her co-workers joke that she's eating everything in the kitchen, McDowell said. She's tried foods she hadn't eaten in more than a decade, finding she no longer associates them with discomfort.

"It brings so much joy," she said. "And it doesn't seem like it would, because it's just food. But it really has.

She must still take some precautions. Because she must rely on gravity to propel food into her stomach, she can't eat too late at night and drinks water to help push it down. She still stays away from really spice foods and orange juice. She takes a multivitamin and drinks Ensure to keep her weight up.

But after a decade of struggles, she said she is grateful to have so few limitations.

"I'm just really grateful for it and thankful and appreciative," McDowell said. "If I can help anybody else in this situation, or give anybody a little bit of hope in a situation like this, I definitely would love to be the person to do that."