The new Penn Nerve Center offers an interdisciplinary approach to patients like Gail Cohen, a New Jersey resident who previously had lung cancer and a brain tumor 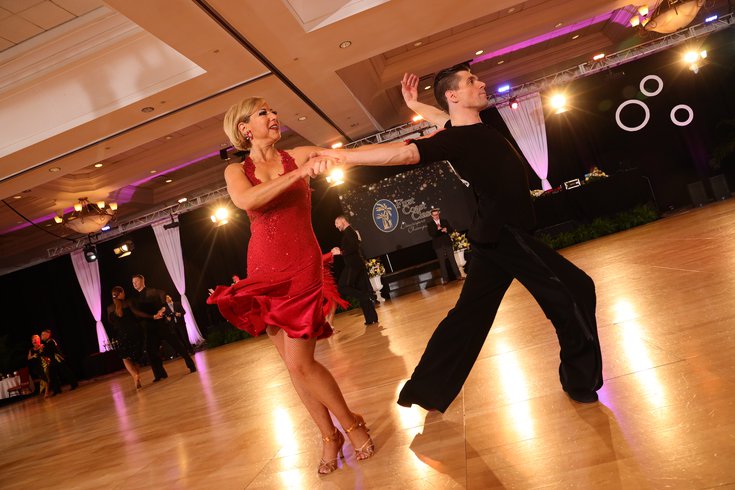 Gail Cohen, dancing above with Tommy Radon, thought her competitive ballroom dancing career might be over when she was diagnosed with a benign tumor in her nervous system. But she was back on the dance floor within four weeks of surgery.

Gail Cohen was enjoying a day at the beach three years ago when she felt a lump on the back of her left knee and then started to feel numbness in her foot — a scary experience for anybody, but especially a competitive ballroom dancer.

Having already experienced a benign brain tumor and lung cancer, Cohen, 60, knew how important it was not to ignore her symptoms. She turned to Penn Medicine, where she previously had received treatment, and was ultimately diagnosed with a benign schwannoma, a tumor that grows in the sheaths of nerves in the peripheral nervous system — the parts of the nervous system that aren't in the brain or spinal cord.

Because schwannoma tumors are located in precarious positions, they can be challenging to remove and require a skilled surgeon. Cohen was referred to Dr. Zarina Ali, a neurosurgeon at the new Penn Nerve Center, who performed the surgery.

The facility centralizes neurosurgeons, plastic surgeons, physical therapists, orthopedists, neurologists and radiologists, among others, all in one place.

"What I loved about (Ali) was that she gave me the big picture of what my options were and the risks involved," Cohen told PhillyVoice. "She gave me all the information, but let the decision be mine."

Ali believed she could successfully remove the tumor and get Cohen back to dancing, but there was always the risk that she could lose feeling in her foot. If that happened, it would mark the end of her ballroom dancing career, which she had begun just two years before.

But further nerve damage also was a risk if Cohen decided not to have the surgery.

Cohen, of Ventnor, New Jersey, had gotten hooked on ballroom dancing after she recovered from her brain surgery. A friend had asked her to join her for free lessons. She loved it so much that she kept going.

Cohen found dancing was really great for her mind and helped with some of the side effects she was still experiencing after brain surgery. Her go-to dances are the waltz, the fox trot, rumba and cha-cha.

At the time of her schwannoma diagnosis, she was already dancing competitively. Whether to undergo surgery was a tough decision, but Cohen knew she didn't want to stop dancing.

The weekend before her surgery, Cohen took part in a competition that she described as bittersweet because she knew there was a chance she may never dance again.

The surgery was a success though, and she was back to dancing in four weeks and participating in competitions in eight weeks. She now spends 10 to 12 hours a week at Storm Ballroom Dance Centre.

Since returning to the dance floor, Gail has won many different awards, including overall top student, while competing on the Dancer's Cup Tour. Her dance partner is Tommy Radon, who co-owns the Storm Ballroom Dance Centre with his wife, Jennifer.

"It is amazing how she has evolved through what she has gone through. She really fought to be where she is today," Radon said. "I have so much respect for her and am honored to dance with her. She taught me a lot about strength."

Cohen attributes her full recovery to Ali and her staff. She credits them with taking care of the whole patient — not just the physical ailment. She said Ali called her directly the day after the surgery to check on her, and a nurse practitioner was always available.

Cohen said Ali's staff offered ongoing support and checked up to see how she was doing both physically and emotionally. They encouraged her to call anytime she had a question or concern.

"Dr. Ali's approach is great," she said. "I like to say that Penn brought my body back, but dancing brought my soul back."

Ali, the co-director of the Penn Nerve Center, has extensive experience with both benign and malignant tumors.

"Diagnosis is a critical piece," she said. "Gail came to me after the tumor had been identified. She also had previous tumors so malignancy was a possibility."

The goal was to get rid of Cohen's tumor while maintaining the function of the nerve, Ali said. She used Penn's standard microsurgical technique for resecting the nerve tumor, a routine approach.

She also utilized an intravenous protein-bound dye, indocyanine green, as part of a pilot study to visualize the tumor. The dye glows brightly under infrared light, making it easier for the surgeon to separate nerve follicles from the tumor.

For Ali, it is not just surgical skill that is important when treating patients like Cohen.

"Most important is understanding how the problem affects their every day life," Ali said. "Doing this puts the risks vs. benefits into context for me so I can give them a framework of what I can do for them.

"The fact that Gail was a ballroom dancer was very important. She was concerned over losing function of her foot. I knew she had a tumor and I knew I could cure it and leave her still dancing."

Patients with nerve conditions often have complex cases that require care from specialists in multiple disciplines, but lack an expedient way to bridge communication among the physicians.

Sometimes, it can take a while to find the right diagnosis or patients may ignore their symptoms at first, said Dr. L. Scott Levin, chair of Penn's orthopaedic surgery department and co-director of the Penn Nerve Center. For many of cases, time is of the essence and could change outcomes. The nerve center aims to centralize their care while also identifying better way to care for nerve patients.

"We wanted to see how we can treat highly complex problems better," Ali said. "Many patients have had a traumatic nerve injury so it made sense to localize at Penn Presbyterian Medical Center where the ultrasound department was just around the corner."

Ali noted that she recently had a patient who traveled a good distance to visit her. In one day they were able to get her fitted for a brace and schedule all of the tests they need to provide a diagnosis and suggest treatment.

Ali encourages other doctors to refer patients with nerve disorders to centers like Penn's, where the staff have expertise in removing nerve sheath tumors without leaving a deficit and treating brachial plexus injuries.

The brachial plexus is a bundle of nerves that connect the neck and torso sections of the spinal cord (C5-T1). These are the nerves that control the movements of the wrist, hands and arms.

These nerves can be injured by too much pressure, stress or being stretched out too much. They can also be damaged by cancer or radiation treatment. These injuries often require surgery to repair the damage.

"We can offer a higher level of care so early diagnosis and referral is important," she said.