U.S. Sen. Pat Toomey's Pennsylvania constituents were hoping to be heard Thursday night, when he was the special guest at a $1,500-a-plate fundraiser in Delaware County.

They're still doing just that: hoping. But it's increasingly becoming a demand.

The senator was the 2017 Chairman's Club honoree at an event put on by the Delaware County Republican Finance Committee and hosted by its chairman, Andrew J. Reilly, a Media attorney who heads the county GOP.

More than 100 protesters rallied outside of the 6 p.m. event at Drexelbrook Catering at 4700 Drexelbrook Drive in Drexel Hill. They did not spot Toomey, and it is unknown if the senator actually attended the event.

.@SenToomey is at an event at drexelbrook but his constituents are outside telling him to #answeryourphone and #dumpdevos pic.twitter.com/H7NAfkAYws

Saying they have gone unheard after months of visits to Toomey's district offices, plus thousands of phone calls, emails and faxes, activists from "Tuesdays with Toomey" and a number of other community, faith and labor groups arrived hoping to finally catch the senator's attention. 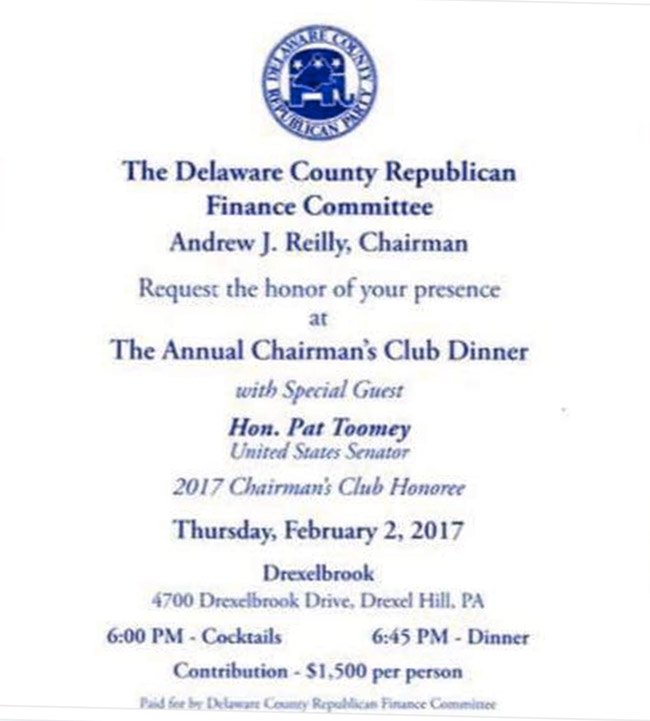 "This is the first protest I've ever been to where the real demand was just to serve your constituents," said Jesse Bacon, a digital campaign strategist who traveled to catering hall from Philadelphia. "These are things a senator should be willing to do regardless of ideology. There was something really powerful about this. We weren't sticking up for one party or one interest. We were sticking up for democracy."

In recent days, education activists have been urging Toomey to join two Republican senators in their opposition to education secretary-nominee Betsy DeVos, whose nomination could be rejected if a third Republican were to join all 48 Democratic senators in voting against her.

Prior to Thursday night's fundraiser, Toomey released a statement expressing his support for DeVos:

I am pleased to vote to confirm Betsy DeVos as Secretary of Education. Betsy DeVos has spent nearly three decades of her life, tens of millions of dollars, and considerable personal energy toward one noble goal: ensuring that poor children trapped in failing schools have the same opportunities that wealthy and middle class kids already have.

She has worked for children, parents, and teachers to give low-income children the chance to escape crime and poverty. And let’s face it, too many students are not getting that chance. Their families cannot afford tuition for a private school. Nor can they afford to move to a more affluent neighborhood with a good public school.

Because of Betsy’s work to expand charter schools, virtual schools, school choice, tuition tax credits, and education savings accounts, hundreds of thousands of children who had been trapped in failing schools have been able to access a quality education.

She understands that reform should begin with parents and communities.

Bacon said he was motivated to attend Thursday night's protest because he, like so many others, had been placing regular calls to Toomey's office without any response from the senator. When he learned that Toomey would vote in support of DeVos, he decided he would do what he could to take a stand.

"The Trump cabinet as a whole is characterized by people who are fundamentally ignorant of what they are taking charge of," Bacon said. "Schoolchildren are going to be going to public schools, and to have someone so far from being an educator herself, someone openly hostile to these schools, is so wrong."

"Tuesdays with Toomey," a bipartisan group of protesters who hold weekly demonstrations outside Toomey's Center City offices, urged Toomey to oppose the DeVos nomination this week. The group has been critical of the senator's response to their concerns about a number of issues, including education and repeal of the Affordable Care Act.

For Bacon, the message to Toomey remains clear, and he hopes the senator will realize that the people he serves are calling for a dialogue.

"I get that it's not fun to hear people who disagree with you, but you won very narrowly and you should look your constituents in the eye," Bacon said. "It's part of your job. You represent Philadelphia. I really hope you'll hold a meeting in which Philadelphians can talk to you."