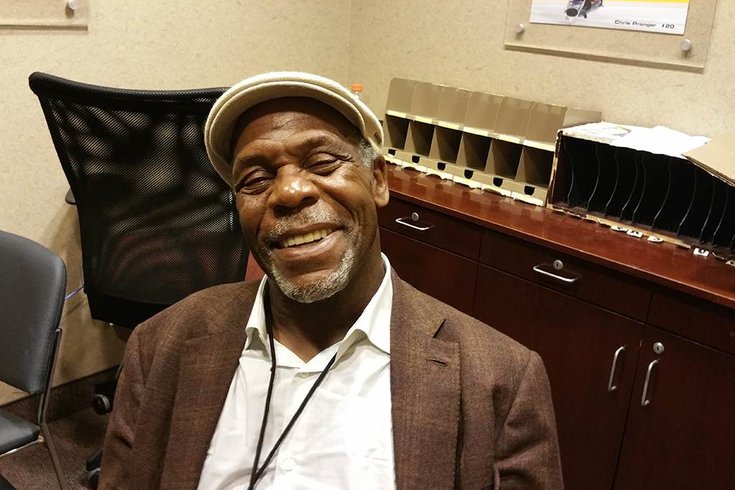 Danny Glover, an enthusiastic supporter of Bernie Sanders, chats Monday night during the first night of the Democratic National Convention at the Wells Fargo Center in Philadelphia.

Danny Glover once played a president in the action movie “2012,” and on Monday night at the Democratic National Convention, he was there in hopes of supporting one.

The veteran actor, who’s appeared in movies for five decades, arrived at the Wells Fargo Center in Philadelphia to support his man — Bernie Sanders.

Glover, 70, a noted political activist who was arrested April 2010 in Maryland during a protest against Sodexo’s alleged unfair treatment of workers, has been an ardent Sanders supporter since February of this year.

“Since there isn’t a game, I’m here for the convention,” Glover said, laughing. “Believe it or not, this is only the second time I’ve ever been to a national convention. This is really an opportunity to gauge and witness one of the great moments in this country’s history,, politically.

“The discourse that’s happening has to be addressed, whose democracy this is. Is it going to be a people’s democracy, or a citizens democracy, or a democracy owned and controlled by the people who are wealthy?" he said. "It’s why this election and convention is important to me. We’re faced with a moment of crisis in this country’s history, where people are hurting. These are poor, working-class people who have been devastated by what’s happened in this country the last 40 years.”

But Glover isn’t afraid to put himself out there.

In 2003, while in Brazil, Glover spoke out against former president George W. Bush, calling him a racist.

“Yes, he’s racist,” Glover was quoted as saying at the time. “We all knew that. As Texas’ governor, Bush led a penitentiary system that executed more people than all the other U.S. states together. And most of the people who died were Afro-Americans or Hispanics.”

In December 2009, Glover went after President Obama, criticizing his foreign policy, telling the website The Daily Beast, “I think the Obama administration has followed the same playbook, to a large extent, almost verbatim, as the Bush administration. I don't see anything different... On the domestic side, look here: What's so clear is that this country from the outset is projecting the interests of wealth and property. Look at the bailout of Wall Street. Why not the bailout of Main Street? He may be just a different face, and that face may happen to be black, and if it were Hillary Clinton, it would happen to be a woman.... But what choices do they have within the structure?”

And today, he continues to see a need to alter the status quo.

“This is a very important discussion that’s going on, but the fact that Hillary Clinton is the first woman to run for President of the United States is really a neat little trivia question someday,” Glover said. “The importance of this election is who is president of the United States—and what do we do when the person becomes the next president. Do we change the nature and real culture of the political system of this country, or do we carry on business as usual?”

Glover has been impressed by the vigor of the young people involved in Sanders’ campaign. They’ve been proactive in their support of the 74-year-old senator from Vermont. For many Sanders’ supporters, according to Glover, many are entering the national political scene for the first time.

“All of these things are real happenings right now,” Glover said. “They say you can’t turn back the clock, but what’s going on with the Bernie Sanders’ movement is undeniable. Let’s see what happens here.

“But I’m a movement man. It’s why I like Bernie," he continued. "When will have another chance to effect change in this country again? Ask yourself that. It’s why I like Bernie. He comes with new ideas, and he’s involved everyone. I think it’s why his supporters are so ardent and haven’t been swayed by the things going on here. It’s why they’re still out on the streets backing him.