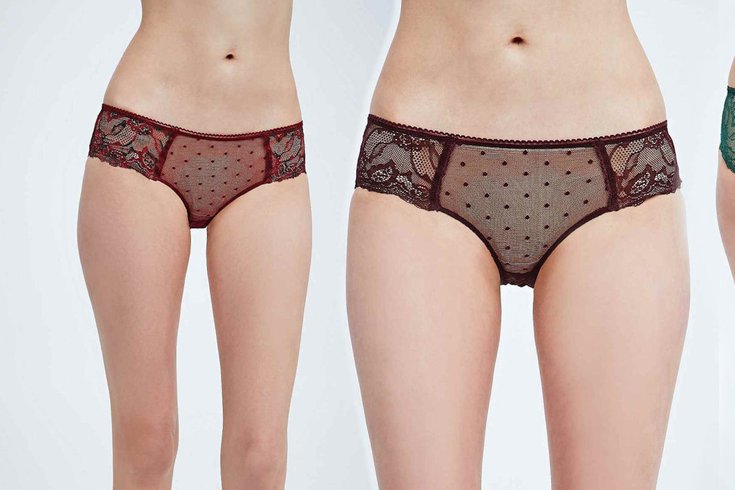 Urban Outfitters was ordered to remove this ad on grounds that it could be harmful.

The Philly-based clothier and tastemaker was recently asked to pull a UK ad featuring a model with an obvious "thigh gap," a reference to the space between a woman's thighs, Philly.com reported.

The UK's Advertising Standards Authority responded to a complaint from an anonymous person who alleged the underwear model looked dangerously thin. The ASA noted that the width of her knees and thighs were similar. Urban's UK branch defended the use of that image, pointing out that the model's waist size (23.5 inches) is within the normal range of sizes outerwear companies make clothes for.

Urban replaced the photo with one of a woman's fuller thighs. Yet an edited version of the original photo that cuts off the model's calves appears to still be in use.

This isn't the first time Urban's gotten into trouble for negative images. You might remember the Kent State blood-splattered sweatshirt controversy reported by Business Insider. Urban apologized for that one, memorably pleading ignorance:

"There is no blood on this shirt nor has this item been altered in any way. The red stains are discoloration from the original shade of the shirt and the holes are from natural wear and fray."

For Urban, when it comes to looking good, it's better to ask for forgiveness - or, as the case may be, deliberate rationalization of an obvious attempt at exploitation - than permission.

Featuring an ultra-thin model in her underwear is clearly emotionally manipulative, but at least it's normal. Even that's less egregious than painting fake blood on a sweatshirt and stating, "It's sun-faded."  That's offensive to common sense.

You might also remember the Lord Ganesh sock scandal. Hindus were understandably annoyed by Urban walking all over an image of their deity, which the company eventually removed from its website. Racing to the front of the line to reduce a thing of reverence to a gag you'd find at Spencer's Gifts, while attesting to brilliant irony, or whatever, is indeed a deeply annoying business model.

As for the underwear model, if thigh gaps and the distorted body image they represent weren't trending so hard right now, her image might not be offensive after all.