A member of the Philadelphia Parking Authority writes a ticket for an expired meter in Center City.

The Philadelphia Parking Authority named a new executive director on Friday, roughly a week after scathing audit findings from the state likened the agency to an "absentee landlord." 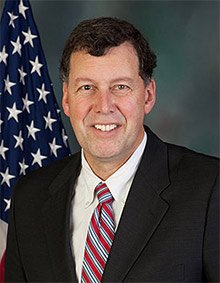 Pennsylvania state Rep. Scott Petri, a Republican who represents the state's 178th Legislative District in Bucks County, was appointed at the PPA's monthly board meeting. He will step down from the legislature before starting at the agency on Jan. 2, the agency said in a press release.

Petri serves as chairman of the House Urban Affairs and Ethics Committee and vice chair of the Appropriations Committee, in which he oversaw the state's annual budget.

"My role will be to question everything we do, why we do it, and are we obtaining the best result,” Petri said in an Inquirer report.

The position had been vacant since former Executive Director Vince Fenerty resigned in 2016 after two women accused him of sexually harassment.

Although the audit by state Auditor General Eugene DePasquale did not name Fenerty, it blasted the PPA for failing to oversee his activities and claimed the authority went out of its way to keep Fenerty on the payroll despite the allegations.

Fenerty was also able to use paid leave and comp time to his advantage and had almost unchecked power in the PPA's hiring process, using informal practices and circumventing the Equal Employment Opportunity Policy, DePasquale said last week.

RELATED: Will audit findings spark a Philly takeover of the PPA?

A separate audit also found that the PPA mismanaged about $78 million in revenue over the last five years that could have gone to Philadelphia's cash-strapped school district.

“The PPA of today is not the same agency that it was 15 months ago," PPA Chairman Joe Ashdale said in a press release. "We have made a number of substantive and concrete changes to make the agency more efficient and transparent – including implementing over 80 percent of recommendations contained in a recent audit of the agency.

“With [Petri's hiring], we continue the process of further reforming this agency and improving our service to the people of this city."

Along with Petri's appointment, the authority also announced on Friday that it had brought Vincent Thomas from Baltimore's parking authority to serve as the PPA's deputy executive director for off-street parking operations.

In the PPA release, Petri stated that he's planning a top-to-bottom review of the agency and will "implement additional changes and reforms, to help regain the trust and confidence of the people we serve."