After latest Eagles loss, reason for concern on both sides of ball 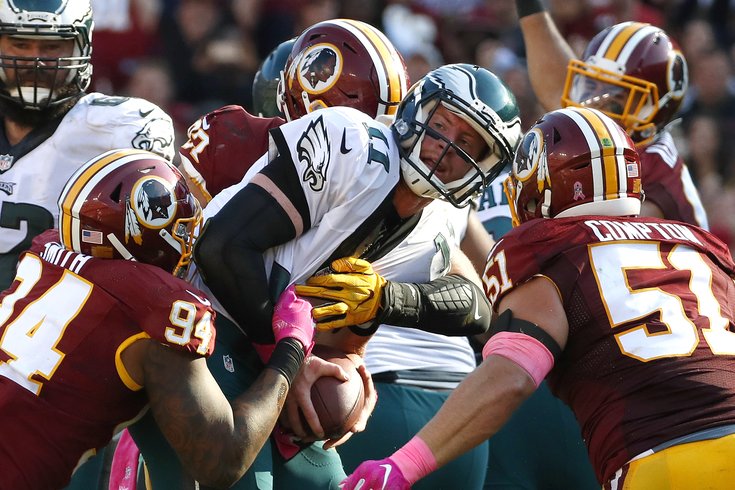 Philadelphia Eagles quarterback Carson Wentz is sacked during the second half against the Washington Redskins.

There's a lot not to like from the Philadelphia Eagles' 27-20 loss to the Washington Redskins on Sunday. And more concerning than the fact that they've lost for the second-straight week – after starting 3-0 – is that many of the reasons they're 0-2 since the bye are difficult, if not impossible, to correct in the six days they'll have to prepare for Sam Bradford and the undefeated Minnesota Vikings.

That's why, in examining what went wrong at FedExField, it's worth putting those shortcomings, mistakes, whatever you want to call them, into some sort of long-term perspective before thing spiral out of control.

But despite the outcome of the game, rookie head coach Doug Pederson isn't worried about the losing becoming contagious -- although it's worth noting he said the same thing follow last week's loss to the Lions.

"You can begin to go down that road; I don’t ever look at it that way," Pederson said. "I was 1-5 a year ago and went on a 10-straight deal; I’ve seen it on both ends. It is my job to make sure these guys are ready to go, mentally, physically, the whole thing, so we can be ready for next weekend. Short term memory; you watch the tape and make the necessary corrections and move on from it. You learn from it.

This isn't going to be a fun read for Eagles fans, but it's a necessary one, especially following the highs of the first three weeks. I'll try to keep you sane with at least one positive point on each of the following topics, but I can't make any promises that it'll make you feel any better.

POSITIVE: For the most part, Carson Wentz looked good when he had even a little bit of time to throw. It wasn't his best game -- in fact, it was probably his worst -- but given the constant pressure he faced from the Redskins, you have to like how the rookie responded despite being sacked five times and hit on 11 of his 22 pass attempts.

This could be bad for a couple of reasons. In the short-term, it could cost you a game. But in the longterm, it can cost you so much more. If you have a rookie quarterback, especially one on whom you spent so much to draft and has all the makings of your franchise QB going forward, you need to protect him. It's that simple. Against the Redskins on Sunday, the Eagles did a terrible job of that.

The main offender was rookie lineman Halapoulivaati Vaitai, who was making his first NFL start in place of a suspended Lane Johnson, but I'm not putting this one on Big V. From the start of the game, it was clear that Vaitai was outmatched by Redskins DE Ryan Kerrigan. And given their respective resumes, that shouldn't have come as a surprise to anyone.

Yet, somehow, it caught the Eagles coaching staff, who all week had said that Vaitai was ready, off guard.

"I just liked the way he matured and worked during practice when he went against our guys," Pederson said postgame. "Just what we saw in training camp with him being in a position to help us and the fact that we didn’t have to disrupt two spots; we could just focus on one and get one player ready to go and we’ll continue to work with him.”

Pederson also said that he didn't consider making changes along the line at halftime, despite Wentz being sacked four times in the first 30 minutes, because he had "too much confidence" in his guys.

Still, it's not like Johnson's 10-game PED suspension came out of nowhere – everyone had known for weeks that he would be sidelined if he lost his appeal – and the fact that they were not better prepared is inexcusable.

The team's most important asset is Wentz, and if there's one place you want to make sure is always in top form, it's the offensive line. If you want to trade Dennis Kelly for a wide receiver (after reports of Johnson's possible suspension surface), you might want to have someone who has played a few snaps before sending him out there against NFL linemen.

Next on tap for the Eagles? The Minnesota Vikings, who are averaging more sacks per game than any other team in the league. They'll also have to face the Packers and Seahawks, both of whom are in the top 10 in sacks.

“Lane is a big part of what we were doing and he was playing well," Pederson added. "It is disappointing from that standpoint, but at the same time we’re handed these cards and we’re going to play, play with the best five upfront. It is our job as coaches, it is what we are hired to do, to make our players better. We’re going to do that this week.”

They better, or else it could be a long nine weeks for the Eagles while they wait for their starting right tackle to return.

POSITIVE: Of all their problems, this is the one that should be the easiest to correct. Not much of a silver lining, I know, but it's better than nothing...

Following the third straight week in which they were penalized at least 10 times, the Eagles are now tied with the Raiders for the most penalties per game (9.8). After the way they started the season, many were surprised by the suddenly undisciplined way the Birds played against the Lions, drawing 14 penalties (some of them were questionable, but the majority were earned).

But perhaps they shouldn't have been:

But perhaps we shouldn’t be surprised by all these flags… pic.twitter.com/lG3CgeDo1z

Against the Redskins, they were flagged another 13 times for 114 yards, some of which were quite costly.  There was the block in the back called against Wendell Smallwood that negated a 38-yard Dorial Green-Beckham catch on 3rd & 11. Or the late hit by Fletcher Cox that turned a potential field goal try into 1st & goal (and ultimately a touchdown). In all, the Eagles handed Washington five first downs via penalty, and that's five too many.

"Penalties and third downs, that’s the name of the game," Pederson said after the game. "It starts with me. I have to go back and evaluate. It is just a discipline thing. I have to look if our guys are in position, are they out of position, are they moving their feet, not moving their feet. Whatever they are doing to cause the penalties – some of them are legit, obviously – but it is an area we definitely have to clean up. That, and third down."

They're going to need to be better disciplined moving forward if they hope to get back on track heading into the toughest part of their schedule.

POSITIVE: Even in their losses, there were times that the defense played very well. After allowing 21 points in the first half of each, they buckled down in the second half and held both the Lions and Redskins to lone second-half field goals. That allowed the offense to have a chance to at least tie both games late in the fourth quarter. Oh, and Malcolm Jenkins had a pick-six...

What the hell happened to Jim Schwartz's unit?

For the first time all season, it failed to record a sack in a game after at least three in each of its first four games. The Birds were holding opponents to less than 10 points per game heading into the bye. But against both Detroit and Washington, they allowed 21 before halftime. They've struggled to get off the field on third down -- the Redskins were 7-for-13 -- and have seemed totally disinterested in tackling.

How many times on Sunday did the first guy miss the tackle? Because it sure seemed like it was -- hold on let me see how many plays they ran, carry the one -- all of them. How else do you explain the Eagles, who had only allowed 293 rushing yards in their first four games (73.3 yards/game; 3rd in NFL), allowing 230 yards on the ground against a team averaging just 86 per game?

The question now becomes how to fix it. And as we learned under Chip Kelly, bad tackling isn't something that typically just fixes itself. Maybe Schwartz should pop into Brian Dawkins' office at the NovaCare Complex and see if Weapon X is available to give the defense a demonstration at Wednesday's practice...