Does not take questions from media 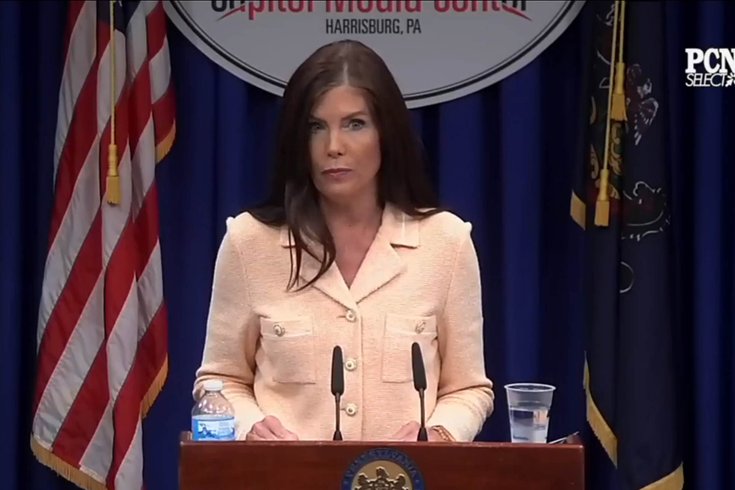 Kathleen Kane addresses the charges against her before the media on Wednesday in Harrisburg.

"I am innocent of any wrongdoing," she began. She added she did not conspire with anyone or break any laws.

"My defense will not be that I am the victim of some old-boy network," she said, though she then spoke about a chain of "filthy" emails, including pornographic photos, that she uncovered within the Attorney Generals' office under Tom Corbett, who later became governor.

She called her indictment a “stealth political weapon" meant to divert attention away from emails her office uncovered in reviewing how the former Attorney General's office had conducted the Jerry Sandusky child-abuse investigation.

The trail of emails has been hidden by a veil of grand jury secrecy, she contended.

"Today I intend to begin to reveal the whole story but before I do let me say this: I know that some of you came here today expecting a freewheeling give-and-take press conference.

"Under advice of counsel, and for reasons that will become quite clear a few minutes from now, I cannot. But stick around. I think the story I am about to tell will raise some very troubling questions of its own.

"For it's not a story about sting investigations, personal vendettas or press leaks.

"The chain of events that led to charges being filed against me did not begin with the printing of newspaper stories in the spring of 2014.

"It did not even begin when I was sworn in as Attorney General of the Commonwealth of Pennsylvania.

"No, the chain of events that led to this moment began long before that and it began with a group of state prosecutors and judges passing pornographically, racially offensive, and religiously offensive emails among each other.

A message was left seeking comment from the judge. There was no immediate response to a request for comment by District Attorney Resa Vetri Ferman, who oversaw the indictment.

The statement was her first public comment since she was indicted following a grand jury investigation in Norristown, Montgomery County.

Contradicting contentions Tuesday by her lawyer and her spokesman, Kane announced before the start of the press conference that she would not address reporters' questions.

Legal experts had expressed strong opinions contending Kane can only damage herself by answering questions.

Until now, she’s remained mum, not making a statement nor fielding questions.

Last Saturday, she ducked the media after she was fingerprinted and arraigned after being charged in a payback scheme aimed at embarrassing a former colleague and then lying about it. She is free on $10,000 unsecured bail. Her driver, Patrick Reese, has also been arraigned on charges he snooped in colleagues' emails to keep an eye on the direction of the investigation. Reese has been arraigned and is free on bail set at $5,000 unsecured.

The alleged actions by Kane that led to criminal charges against her began after the Philadelphia Inquirer published an article in March 2014, relying on leaked grand jury information.

The Inquirer story revealed she had secretly shut down an undercover videotape investigation of Democratic officials from Philadelphia seen pocketing bribes.

Kane blamed the lead prosecutor in that case, Frank Fina, for providing information to the Inquirer for their story.

She allegedly decided to undermine Fina by leaking documents to the Inquirer’s sister paper, the Philadelphia Daily News.

Kane has contended she was free to release information about that investigation, saying she was not bound to secrecy because the case was from a past administration.