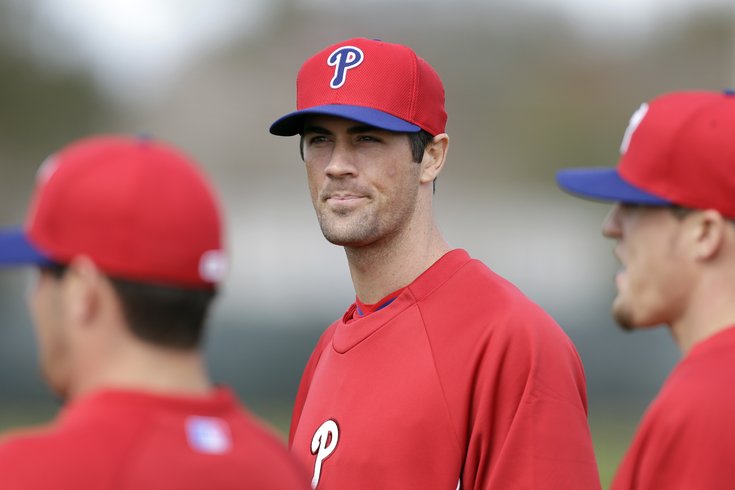 It's been a weird week for sports, and the NBA All Star Game is in New York this weekend, so it's only going to get weirder. But don't worry, your dad's favorite pastime, baseball, is right around the corner. Just remember how excited you are for pitchers and catchers to start playing long toss come late August when you'll literally do anything to Larry Andersen's voice out of your head.

So enjoy these next few weeks of relevance, baseball, because football won't be  gone long.

1. Spring (training) is in the air

Pitchers and catchers are set to start reporting to baseball facilities across Florida and Arizona next week, meaning baseball is just around the corner. Depending on which team is your favorite, however, that could be good or bad.

While most fans are just excited to hear the crack of the bat, smell the fresh-cut grass, and [insert sports cliche here], there are others -- like Phillies fans -- with decidedly less to look forward to than in recent years.

But don't let the fact that you're predicted to finish with the worst record in baseball get you down, you'll have at least a month or two before the Phils are completely out of it. So enjoy.

By that time, the NFL Draft will be here -- not to mention minicamps and OTAs -- and you can go back to ignoring* the Phillies.

Here are attendance numbers since 2008, when they won the World Series:

Any guesses on whether or not their record follows a similar trajectory? Just throwing that out there...

Apparently Alex Rodriguez is human, contrary to what the giant portrait hanging above his bed may suggest. And earlier this week, he proved that, when he apologized* to the Yankees -- namely owner Hal Steinbrenner -- for "his actions over the past few years."

*This isn't listed under the "Good" category because I think A-Rod's actions are admirable, let alone worthy of praise. This is here because it signifies that we're one step closer to Rodriguez admitting that the used PEDs.

Alex Rodriguez apologizes to Yankees "for his actions over the past several years" in meeting he initiated Wednesday, team announces.

It's unclear whether or not he was apologizing for taking steroids or simply for maintaining his innocence, thus receiving a harsher suspension -- he missed all of 2014 -- than the other players linked to the Biogenesis clinic. The Yankees reportedly still want Rodriguez to address the media before spring training starts and likely won't be willing to give him any of the home run milestone bonuses in his contract, like the $6 million he's set to receive when he passes Willie Mays for fourth on the all-time list. He's currently six shy of Mays.

For now, it's just an apology. But it's a start. I wonder if cousin Yuri's wife is still waiting for her apology.

That rug really tied the room together, did it not?

3. On the Whiteside of history

After being drafted early in second round of the 2010 draft, seven-footer Hassan Whiteside played just 19 games over his first two seasons in the NBA, both with the Kings. He bounced around in the D-League for a little while. He then spent the last two seasons overseas (Lebanon and China) before signing with the Grizzlies in September, only to be waived a month later.

In December, Whiteside was signed by the Heat. Since then, he's been playing at a level no one -- with the exception of Whiteside himself -- saw coming.

In the last month, since he's started playing significant minutes on a nightly basis, Whiteside has not only been one of the best centers in the league, but one of the best players overall. In those 12 games (nine starts), he's averaging 14.2 points, 11.8 rebounds and 3.2 blocks in just over 25 minutes per contest.

That's good for first in rebounds and blocks among players who have played in at least 20 games this season and his field goal percentage is fourth behind DeAndre Jordan (72.5 pct.), Brandan Wright (69.7) and Tyson Chandler (68.4). He also has a player efficiency rating (PER) of 28.5, which is tied with Russell Westbrook for second in the entire NBA. Anthony Davis (31.5) is first.

How did so many teams overlook this guy?

Star of the Little League World Series, Mo’ne Davis, has a fan in Steph Curry. The Warriors guard chatted with Davis prior to his team's game against the Sixers earlier this week, and he even asked for her autograph. 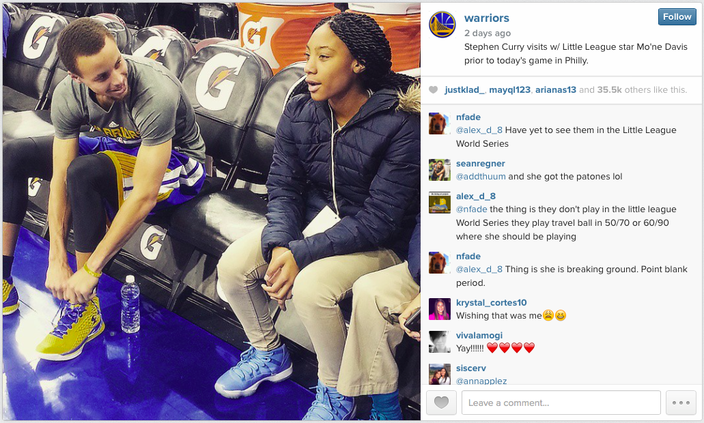 She'll play in the celebrity game Friday night at Madison Square Garden as part of NBA All-Star weekend. Maybe UConn coach Geno Auriemma will be watching. She is aspiring to play college basketball after all.

5. Is it lacrosse season already?

This hockey goal, while it may look familiar, was scored by a fourteen-year-old player from Buffalo, N.Y. during a juniors tournament.

And look at the score of that game. At least one hockey team from Buffalo is winning. Had they not just acquired winger Evander Kane from the Jets as part of a blockbuster trade, maybe the last-place Sabres could've used this guy...

After his glutes failed to activate last week, Woods was forced to withdraw from the WGC-Bridgestone Invitational. Now, he says he won't compete again until he's ready, but is hoping to return for the Honda Classic, which is just two weeks* away.

*And in plenty of time for the Masters

But considering he's failed to finish six of his last eight tournaments (three missed cuts, three injuries), he may not be back for some time. And it's safe to assume the Tiger you remember -- at least the one you want to remember -- is done for good. For the PGA, that's not going to be good for business. But really, that's not good for anybody.

2. Sins of our fathers

Archbishop Wood girls basketball coach John Gallagher resigned this week after it was alleged Gallagher had emailed college coaches that were recruiting rival players --namely a pair of African girls on No. 1 ranked Neumann-Goretti -- claiming that they were ineligible because they had lied about their age.

Like with the Jackie Robinson West* scandal, I understand the outrage over the idea of parents, coaches or others guardians breaking rules in the name of helping their kids win. Just don't take it out on the kids.

*More about them later

Especially when your claims are unsubstantiated.

I wonder if Rory McIlroy is going out of his way to avoid checking the mail? Does he even check his own mail? How does that work? He's gotta be traveling 80 percent of the year.

Wait, what were we talking about? Mail. That's right. Be right back....

4. It's so hard to say goodbye

I was crushed to learn that the most-trusted newsperson in America, The Daily Show's Jon Stewart, will be resigning his post. Some of his best monologues had to do with sports, although perhaps I'm a little biased here.

Cindy Boren of the Washington Post did a great job rounding up some of his best sports rants. It's definitely worth checking out.

This video comes from hockey's collegiate ranks, specifically a game between RPI and Clarkson. While this was bad news for the face of No. 5 on RPI, it was good news for the local glass maker.

Jackie Robinson West, the U.S. champ at the 2014 Little League World Series, was forced to vacate its title on Wednesday after Little League officials uncovered that they had falsified the districting boundaries so that certain players that lived outside their territory could play on their team.

The parents -- and even rival coaches from opposing Chicago leagues -- are supporting what JRW did, saying that they voted on boundary changes so that some players who moved out of the district could remain on the team with the friends they been playing with for years.

If that's the case, it changes my opinion slightly, but the title has already been awarded to the team from Las Vegas and the JRW kids forced to watch the highlight of their childhood become forever marred. Punish the coaches. Or the parents. Or no one. Just don't punish the kids.

Just a few minutes into Saturday night's game between Griffith and Hammond high schools in Indiana, one of the Griffith players was fouled hard while going up for what appeared to be a fast-break dunk.

He was fouled hard by one of the Hammond players, and well, just take a look at what happened from there:

After the court was cleared, officials cancelled the remainder of the game. Then, on Tuesday, the Indiana High School Athletic Association (IHSAA) announced that both teams were done for the season and would not be eligible for postseason play, according to nwi.com.

The coaches, officials and parents* deserve some credit here. The were able to separate the players rather quickly, all things considered. It seems from the above video that it could've been much worse.

*Okay, maybe not all the parents, as one apparently struck a player after running onto the court, per nwi.com.

NBC Nightly News anchor Brian Williams has been suspended for six months after it was revealed that he repeatedly lied about being in a helicopter that was shot down in Iraq. Since the story first broke last week, media outlets across the country -- including NBC -- have been probing into Williams' past to try to dig up other lies, or other times that he's "misremembered" something.

It'll be hard for Williams' career to survive this, but we'll see what happens after his suspension is up.

And you know 2015 is off to a rough start for Williams when this may not be the most difficult thing he's had to endure this year.

Panthers defensive end Greg Hardy had the domestic violence charges against him dropped this week. But the process is  a long way from finished thanks to the NFL's revamped conduct policy.

It'll be the first real-life case study for commissioner Roger Goodell's new program, but it's hard to envision a scenario where there isn't a lengthy appeal process, no matter what verdict the NFL hands down. In addition to that, the Panther may cut the 26-year-old lineman. No matter what happens, the longer this stays in the news without football being played to distract us, the worse it is for the league's image.

Speaking of reasons why Goodell is already sick of the offseason news cycle...

Aaron Hernandez's fiancee, Shayanna Jenkins, has been granted immunity in exchange for her testimony against the former Patriots tight end in the Odin Lloyd murder trial. Police believe she assisted in the disposal of -- or a the very least knows the location of -- the gun they allege Hernandez used to kill Lloyd.

But, in a move straight out of a crime novel, Jenkins could plead the fifth and refuse to testify, thereby being held in contempt. She would likely face jail time, but nothing close to what she was looking at before a deal was in place.

The best part is, Jenkins has been publicly visible in her support of Hernandez throughout the trial, even smiling at him in court when he mouthed "I love you" to her.