As All-Star Game voting deadline nears, a look at the best of 'Joel Embiid #NBAVOTE' 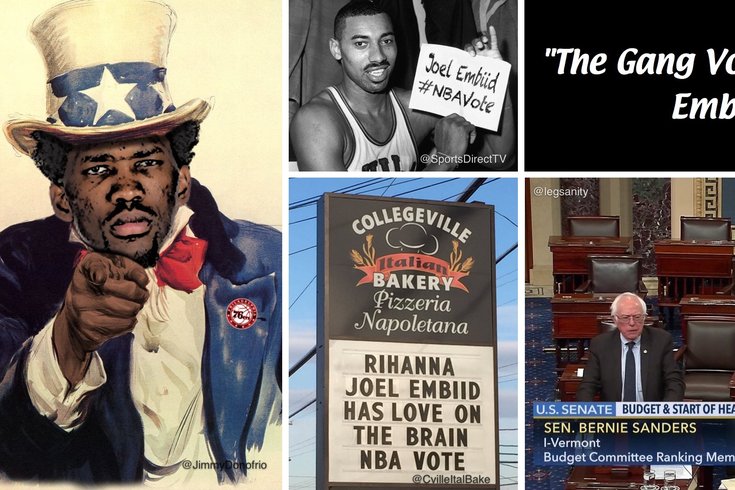 Joel Embiid established himself as a Twitter giant in 2017. That's why he gets a category of his own in this '50 Great Tweets' roundup.

Joel Embiid is one hell of a teammate.

I'm not talking about how his presence on the court elevates the game of those around him, like in Monday's MLK matinee win over the Bucks -- Embiid scored 22 points, grabbed 12 rebounds and added five blocks in the 113-104 victory.

No, I'm talking about how the Sixers rookie center has elevated the collective Twitter game of countless fans, from Philly and beyond.

We've already written about Embiid's social media prowess, but if the 22-year-old can indeed pass Kevin Love in the NBA All-Star Game fan vote, which closes at 11:59 p.m. on Monday night, it won't be solely because of the continually great content coming from @JoelEmbiid.

It'll be due, in large part, to the incredibly number of funny, clever, and just plain awesome #NBAVOTE tweets coming from every angle.

With the deadline for fans to vote Embiid into the All-Star Game looming, I figured now was as good a time of any to compile some of the best tweets. Not only will it help give the big man one last push, but it will also serve as a time capsule of sorts, or a quick reference guide whenever you need to reference that funny photoshop or GIF.

If you stuck around until the end -- and I thank you for doing so -- it's probably because you wanted to see if your favorite #NBAVOTE tweet made the list. If it didn't, fear not; there are so many good ones out there that it was impossible for me to track them all down on my own (h/t to @MaxRappaport, @shamus_clancy, @kurtwearshats, and, of course, @rich_hofmann for helping me find some).

If your favorite(s) were left off the list, hit me up on Twitter and I'll be sure to add them.

Oh, and don't forget to RT the ones listed above before time runs out...