How could anyone be a Phillies, Flyers, Sixers and ... Cowboys fan?!?!?

In October 2007, Daulton Rissinger was on hand for the first playoff game ever at Citizens Bank Park. He and his father, both diehard Phillies fans, were wearing red, cheering on Cole Hamels against the Colorado Rockies. And at some point, the chants started.

For the most part, it doesn’t matter if the game is baseball, basketball, or hockey. If you have attended any type of sporting event at the South Philadelphia Sports Complex, there is a decent chance you will hear the home fans spelling out the same six letters at one point or another.

“My dad was like, ‘I just want to have a good time at the Phillies game’ and then they got to start chanting about the Eagles and whatnot,” Rissinger said.

Philadelphia has attracted plenty of recent praise as a destination from outsiders — Remember when The New York Times ranked us third worldwide in their “Places to go” feature? — but when it comes to the sports teams, we’re still a strictly provincial city. The idea of a “4 for 4” fan, meaning that you root for the Flyers, Eagles, Sixers and Phillies, is the rule in the Delaware Valley, not the exception.

Among those four teams, one clearly takes top priority. The fact that Rissinger heard chants for a 1-3 Eagles team when the Phillies were playing their first playoff game in 14 years is a testament to the fact that this is, first and foremost, a football town. There is plenty of attention to go around, but the Eagles still dominate television, talk radio, print/online coverage, and all other mediums.

This puts Rissinger, a rare breed of fan, in an awkward spot. He’s technically a “3 for 4,” but the one difference is a biggie. Not only does Rissinger dislike the Eagles, he’s a fan of their biggest rival and the most hated professional sports franchise in the city. 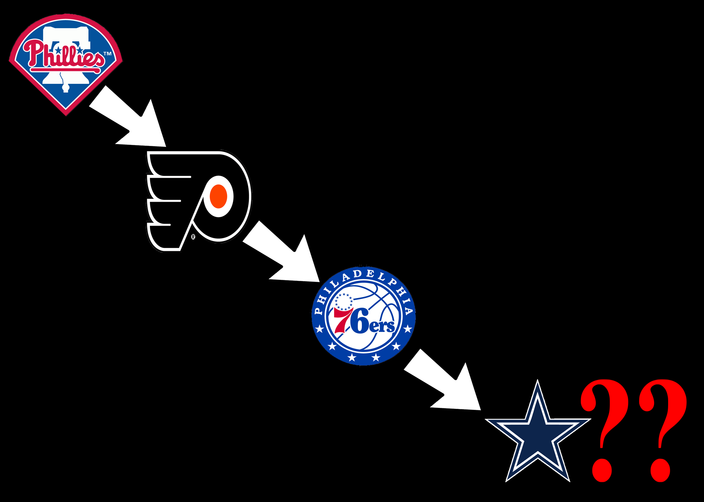 As you might imagine, the “3 for 4” isn’t a particularly common concept but there are a few Philadelphia/Cowboys fans out there. Like Rissinger (who still has baby pictures of himself in a Cowboys onesie), Justin Jenkins inherited his football fandom from his dad. Originally from Overbrook, Jenkins’ father became a Cowboys fan in the 1960s because Eagles games were subject to a television blackout.

At that time, many of the nationally televised games featured Tom Landry’s Dallas Cowboys. And even though he remains a diehard Cowboys fan to this day, the passion of the other Philadelphia sports isn’t lost on Jenkins.

“As I was growing up, I dealt with stuff like threats of physical violence,” Jenkins said. “I’ve even gotten death threats before because a Cowboys fan in Philadelphia territory, it didn’t compute to them.”

“I’m diehard with the other three teams, it’s just that the Cowboys came before I really understood what fandom was,” Jenkins said. “And since I started understanding what that meant, as I grew up, I decided to stick with my team.”

(Here’s one piece of common ground that Jenkins has with Eagles fans: “Brian Dawkins is the quintessential safety to me. He is the perfect example of how you’re supposed to play the position and what type of person you’re supposed to be.”)

Due to the heated nature of the NFC East rivalry, Jenkins said that Cowboys fandom made his life growing up in the Philadelphia area tough at times. A “child of the 90s,” he would often wear Cowboys gear (specifically, a Starter jacket) to school.

Jenkins said that openly backing the local enemy throughout his life has created some big problems.

“As I was growing up, I dealt with stuff like threats of physical violence,” Jenkins said. “I’ve even gotten death threats before because a Cowboys fan in Philadelphia territory, it didn’t compute to them.”

Death threats? As a kid?

“Yeah, my whole life. I’ll be the first to admit, not all fans are the same. I have a lot of friends that are Eagles fans, I love talking football with them. I don’t mind talking football, I don’t mind jawing and that stuff. It’s just that some people really take it too far with the insults and by ‘too far,’ death threats, physical violence and stuff like that.”

Originally from the Scranton area and now a student Drexel University, Rissinger isn’t afraid to wear Dallas gear in the heart of enemy territory despite the potential risks. Recently, he showed up at The Linc for the Week 17 game wearing his Dez Bryant jersey.

Rissinger clearly identifies himself as a Cowboys fan on gamedays, but at all other times, he’s on the same page with the average Philly sports fan. This creates some awkward moments, because for most Philadelphians, to love sports also means to hate the Dallas Cowboys. As a Sixers season ticket holder, Rissinger found his favorite football team’s honor insulted on a consistent basis.

“They started chanting, ‘Dallas Sucks!’ and I just tried to hold myself back in,” Rissinger said of a subway ride after a Sixers game. “I’m like, ‘This isn’t the time, this isn’t the place.’ It’s weird, it’s funny. I just sort of have to laugh at it.”

Unlike Rissinger and Jenkins, Mike Harrison now lives in Cowboy country. Originally from South Jersey, he moved to Dallas in 1996 after his allegiance to the Cowboys had already been declared. With his father, brother, and friends all “dyed in the wool Eagles fans,” Harrison decided it would be fun to play the contrarian.

According to Harrison, the last time he cared about the Eagles was the Fog Bowl (December 31, 1988). It was as that point when one of the franchise’s most beloved figures became too much for him to stomach.

“Even though everybody loved Buddy Ryan and thought he was the greatest thing since sliced bread, I just thought he had no class whatsoever,” Harrison said. “I’m not a fan of his sons, either. So just the way he used to go about things and pit the offense against the defense, I just always thought he was a jerkoff.”

Harrison then decided to adopt a down-on-its-luck Cowboys franchise, which infuriated everybody around him.

“We’re at each other’s throats constantly with going back and forth on the Cowboys and Eagles,” Rissinger said. “But then it’s weird because we’ll sit down and watch a Sixers game and like last night, we’re cheering our asses off watching T.J. McConnell hitting a buzzer-beater.”

“So part of me probably liking the Cowboys, even though they were miserable, was just to get under the skin of my dad, brother, and all of my buddies,” Harrison said. “Because they all think I’m an idiot.”

It’s safe to say that Harrison, whose other favorite team is the Sixers, trusts the process. Last season, he caught Brett Brown’s team when they made stops near his home in Dallas and San Antonio. And when Harrison recently went on a golfing trip in Florida with his childhood friends from the Philadelphia area, the conversation shifted from Cowboy bashing to a shared excitement for what Joel Embiid and Ben Simmons have in store.

Rissinger finds a similar dynamic with one of his roommates.

“We’re at each other’s throats constantly with going back and forth on the Cowboys and Eagles,” Rissinger said. “But then it’s weird because we’ll sit down and watch a Sixers game and like last night, we’re cheering our asses off watching T.J. McConnell hitting a buzzer-beater.”

Having seen both sides of the rivalry up close, Harrison feels that the atmosphere in Dallas is far different than the one he first witnessed at Veterans Stadium.

“There’s no 700 Level like there used to be at The Vet and they would just be crazy,” he said. “You could go to a Cowboys game tomorrow wearing Eagles crap rooting for the Eagles and everything, you’re not going to get beaten up. It’s just different down there, which is why the Cowboys don’t really have a home field advantage. Their fans aren’t rabid like that. It’s a crumpets and tea kind of environment at the games.”