Once homeless and hungry, Philadelphia barista seizes chance to succeed 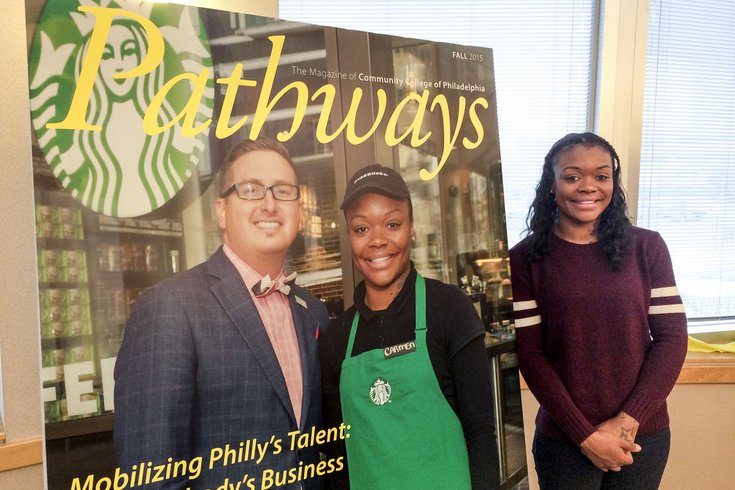 Carmen Williams stands beside an enlarged cover of the Community College of Philadelphia's magazine "Pathways," which features her and Starbucks District Manager Michael Scott. Williams overcame homelessness to gain employment at Starbucks and enrollment at CCP.

Carmen Williams was working as a 16-year-old dancer in the sex industry when she first learned of the program that would transform her life. At the time, dancing seemingly was the best she could do to stave off homelessness and keep some food in her stomach.

Williams, now 21, had spent much of her childhood in the Philadelphia foster care system, bouncing from house to house after being abandoned by her mother. At 14, she dropped out of school because she was unable to afford the required school uniforms.

“I saw people who saw potential in me. If they thought I could do something great, then maybe I could possibly be just a little bit great. I’ve already been at the bottom. I already know what it’s like to be hungry, homeless and abused. The only option was to take a chance.” – Carmen Williams

But Williams eventually found encouragement and guidance at YouthBuild Philadelphia Charter School, an alternative education program that steered her toward employment at Starbucks and enrollment at the Community College of Philadelphia. She now is on her way to a career in social work.

Williams fought tears as she shared her story Wednesday with a room of college administrators, business leaders and local politicians. All had gathered at CCP to cheer her success, which was documented in the school's latest "Pathways" magazine.

“Honestly, I never thought my story would be heard,” Williams said. “But it’s not even just my story. The story that I live and that so many people that I know live every day – this is our reality.”

Her circumstances may be unique, but the larger issues Williams faced are not. One of every four Philadelphians between the ages of 18 and 24 are out of both work and school.

“We don’t want to lead the stereotype that we just want to be in the streets and unemployed and do nothing and drop out,” Williams said. “No – we want more. But we just don’t know how to get it.”

Some companies – both locally and nationally – are stepping up to provide opportunities to youth struggling to gain employment.

Starbucks is among 17 companies that have pledged to create 100,000 new positions by 2018 for 16-to 24-year-olds, an age bracket whose 9 percent unemployment rate is not quite double the national figure.

Williams is among 50 such employees Starbucks has hired in Philadelphia in the last two years through partnerships with YouthBuild and other local organizations.

“She has a lot on her plate,” Starbucks Regional Director Shannon Phillips said. “But she is absolutely doing fantastic.”

Hired as a barista, Williams quickly ascended to serve as a barista trainer. She became a leader within Starbucks’ Black Partner Network and is now being considered for a shift supervisor position.

But Williams has greater visions, inspired by her time at Youthbuild, a program that enables dropouts to earn a high school diploma, prepare for college and gain job skills by completing construction projects. Before Williams entered YouthBuild, earning a college degree seemed a mere fantasy.

“I saw people who saw potential in me,” Williams said. “If they thought I could do something great, then maybe I could possibly be just a little bit great. I’ve already been at the bottom. I already know what it’s like to be hungry, homeless and abused. The only option was to take a chance.” 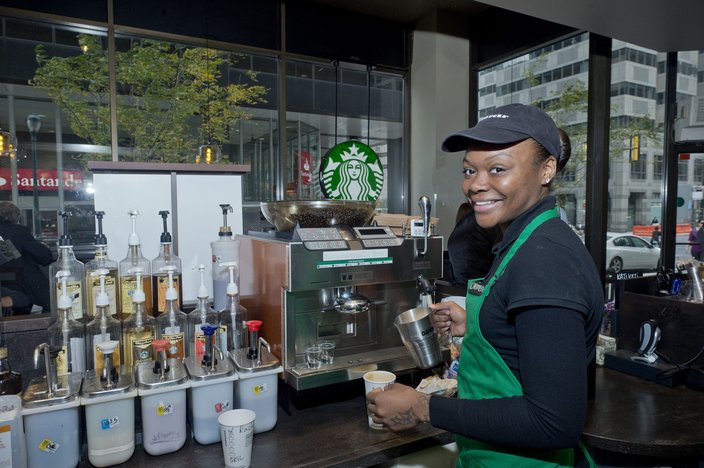 Carmen Williams smiles as she prepares a beverage at a Starbucks in Center City. (Dennis Gingell / Community College of Philadelphia)

GENEROUS WITH HER SUCCESS

As a young girl, Williams and her brother were abandoned by her mother, who was addicted to crack cocaine and fell into prostitution. She still has a photo showing her mother holding the two children – the only time Williams can recall receiving such an embrace.

She stayed in myriad foster homes, including one that also housed about 30 cats, none of which were spayed or neutered. When the cats ruined her clothing, Williams said her foster caretaker refused to provide money to replace them. A school administrator told her she would be suspended until she came to school in uniform.

“I left school – not because I didn’t love school – but because the reality was I couldn’t afford the uniforms,” Williams said. “I got $5 a week allowance from being in foster care.”

Williams spent weeks at a time living on the streets, turning to dancing for money. When she started at YouthBuild, she was spending her nights at a homeless shelter. But she seized the chance to improve her life.

“Carmen very quickly distinguished herself as a leader, as someone who was determined to make something of the opportunity she found at YouthBuild,” said Sarah Peterson, YouthBuild’s communication and development associate. “She looked at it as a commitment. She wanted to help everybody around her make the most of that opportunity.”

Williams graduated as class salutatorian and was named prom queen. She also began taking courses at CCP, where she is finishing up a degree.

Peterson remains impressed by the way Williams grasped the connection between her own success and the success of others.

“I really admire her big-picture thinking and how generous she is with her success,” Peterson said.

Williams, who recently became a mother, knows she’s not the only young adult searching for sustainable employment. She can count numerous others who rise early to go to school and then work late – all while caring for children.

“I really wish you guys could meet all the young people I know,” Williams said. “Because, to you, my story is so amazing. But it’s a life that I’m used to. It’s all I know. If you think I’m amazing, I wish you could invest and see the people I know, because they are phenomenal.”