Analyzing the possibilities as Phillies near finish line of managerial hire 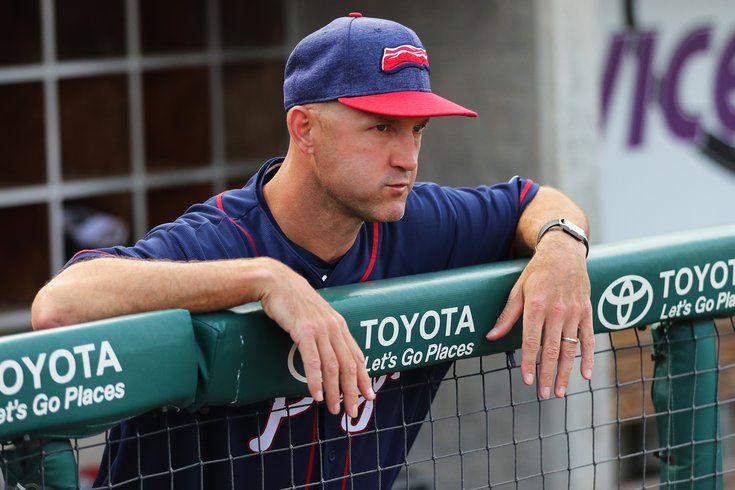 Dusty Wathan, a respected manager in the Phillies minor league system for the last 10 seasons, hoped to follow his father's footsteps into a big league dugout. John Wathan managed in Kansas City and Anaheim in the late 80s and early 90s.

It was four weeks ago today that the Phillies announced the surprising news that Pete Mackanin would not be retained as manager once the 2017 season ended. It was more than mildly shocking at the time since Mackanin had received a contract extension just four months earlier.

A month later perhaps it’s not as stunning because if a team is even remotely considering it might want a different manager for the long-term, that team might as well go about it the right way and conduct a thorough search in October. Otherwise, you go into 2018 how you left 2017, and if you decide in midseason you want to make a change, you don’t have the same collection of (outside) candidates available ... since you’re in the middle of a season.

With all of that said, general manager Matt Klentak and the Phillies have, by all accounts, conducted a thorough search for their new manager. But we’re officially a month in and there hasn’t been any press conference called to make an announcement.

Maybe that too, shouldn’t be surprising: two years ago, the Phillies fired Ruben Amaro Jr. as general manager the second week of September and didn’t hire his replacement until 6 1/2 weeks later. So obviously they are going to want to do their due diligence here.

But three other teams – including two that removed their managers after the Phillies did – have already made their hires and within the last week two high profile managerial jobs (with the Nationals and Yankees) have opened up. So what gives with the Phillies?

On Wednesday morning, USA TODAY national baseball reporter Bob Nightengale reported via Twitter that the Phils were “zeroing in” on Triple-A Lehigh Valley manager Dusty Wathan for the job. But then reports from NBC Sports Philadelphia and MLB.com circulated in the next 24 hours that the front office had trimmed the list to at least a couple of finalists: Wathan and Gabe Kapler, an analytics-friendly front office man (currently the Dodgers player development director).

If Wathan was indeed the man wouldn’t the Phillies have called for a press conference on Thursday, a day between World Series games? Because, yes, the fact that teams are discouraged from making news during the World Series is actually a thing.

But the Phillies surely could have taken care of everything on Thursday, an off day between Series games, if Wathan is the guy, right? They could do the same on Monday if the World Series extends to a sixth game.

Beyond that, we wait. Until then, let’s examine the possibilities.

If the Phillies hire Kapler ...

This would hardly be a surprising development, for a couple of reasons: Kapler is young (he only turned 42 in July) and can, thus, relate to the younger modern ballplayer and he is well-versed in analytics, making a name for himself almost immediately after retirement as a sabermetric-friendly writer and analyst after spending his last two seasons playing for Andrew Friedman and Joe Maddon’s Tampa Bay Rays. We mentioned him in this space four weeks ago as a candidate for those very reasons.

As the managerial search entered its fourth week, PhillyVoice reached out to a person with knowledge of Kapler’s status regarding the Phillies job. But with Kapler’s team (the Dodgers) currently playing in the World Series, they were not in a position to comment.

So, again, perhaps the fact that the World Series is ongoing is holding up the Phillies’ eventual announcement.

Is it possible they could have a handshake agreement in place before the announcement since another team (hello, Yankees) could also have interest in a bright young mind like Kapler? Perhaps, but that feels too conspiracy theory. With the way the Phils have kept the whole search so quiet, sometimes your mind wanders into such places.

What we do know about Kapler is this: he would seem to be a good fit for an organization that’s gone from barely having an analytics department to making the continual staffing of one a priority. As Tyler Kepner of the New York Times wrote in his story regarding the Yankees firing of Joe Girardi on Thursday, modern-day managers have increasingly become extensions of the front office.

Kapler, who has actually worked in a front office for the past three seasons and finished runner-up to Dave Roberts for the Dodgers’ manager job two years ago, would appear to fit the modern manager mold fairly well.

If the Phillies promote Wathan ...

Similarly, this wouldn’t be surprising. But for different (yet still valid) reasons.

While Kapler’s managerial record is limited to one season in Low-A and one spring in the World Baseball Classic, the 44-year-old Wathan has spent 10 seasons as a manager in the Phillies minor league system, beginning with the Williamsport Crosscutters in 2008. He led Low-A Lakewood to a league championship the next year, earned a promotion to Class-A Clearwater and then Double-A Reading, the latter stop culminating with him becoming the long-time Phillies affiliate’s all-time winningest manager.

Yes, he was inside the organization when the previous regime was in charge (in fact, he first joined the organization before the 2006 season, Pat Gillick’s first season as general manager) and not a guy originally hired by either Klentak or team president Andy MacPhail. But he is respected by the current regime, too, which is obvious by the fact that he was promoted by them a year ago (from Double-A Reading to Triple-A Lehigh Valley) and that he’s among the last men standing in an arduous managerial search.

Wathan is also respected by plenty of the growing young players either already inside the Philies clubhouse or on their way.

He managed J.P. Crawford both at Reading and Lehigh, ditto Rhys Hoskins, Scott Kingery, and Dylan Cozens. He helped Nick Williams get back on track and to the big leagues after an off-year in 2016. A former catcher, Wathan tutored a who’s who of battery mates in the Phillies system, including catchers Jorge Alfaro and Andrew Knapp and pitchers including Nick Pivetta, Ben Lively, Mark Leiter, Jr., Tom Eshelman, and Jake Thompson.

“Dusty’s been great for the couple years that I’ve played with him,” Hoskins said earlier this month. “You hear a lot of guys say that this guy is a player's manager. Well, Dusty is that to a ’T.’ I felt very comfortable going to him with baseball stuff and non-baseball stuff. To have that in your manager’s office is pretty special.” 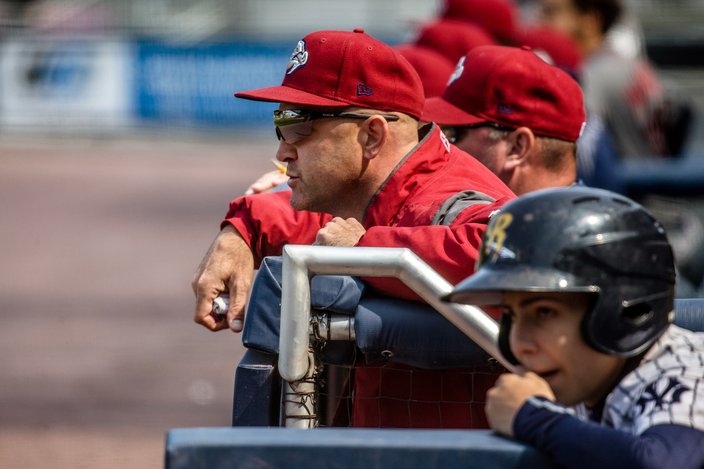 Like the aforementioned, informative NY Times piece from Kepner on the Yankees’ news on Thursday, long-time Sports Illustrated baseball scribe Tom Verducci also wrote an enlightening story on New York’s decision to send Girardi packing, despite being one win away from the World Series. (And you should really read both stories when we’re through here).

Verducci not only mentions how the two teams in the World Series hired outsiders – L.A.’s Roberts came directly from San Diego, A.J. Hinch went to Houston after working in Arizona – but also how both came equipped with strong communication skills, a trait vital to working with both the modern day rosters littered with younger players and a forward-thinking front office they can stay in sync with through the season.

Along with his success on the field through the Phillies minor leagues, Wathan has exhibited he has those communication skills necessary for the job.

One other note: a promotion to a big league coaching staff in any capacity would be a step up for Wathan, so a scenario could exist where he finishes as runner-up for the managerial job but also ends up on the new manager's staff, say, as a third base coach. (Again, Kapler was a runner-up to Roberts in L.A., but managed to remain with the Dodgers).

If the Phillies hire a Mystery person ...

Remember the Cliff Lee Sweepstakes from seven years ago, when the Phillies suddenly emerged as a mystery team suitor in the 11th hour? Fun times. There’s always a chance someone else arises late in the process of finding a new Phillies manager, too.

As both mlb.com and NBC Sports Philadelphia reported, recently-ousted Boston manager John Farrell interviewed with the Phillies on Wednesday. Farrell, a 55-year-old New Jersey native, won a World Series in his first year in Boston (2013) and was fired after winning back-to-back division titles.

Girardi is suddenly unemployed, too. As is Dusty Baker (although I think he’s reached an official limit in the National League after stops in San Francisco, Chicago, Cincinnati, and Washington with one World Series appearance and no titles).

Those are all fun names. But it would seem unlikely they’d join the party this late in the process, and not so much because of the timing as much as the resumes the Phillies appear to be seeking.

On that note, let’s end by referencing Verducci’s excellent story again. Here’s an excerpt to chew on as you head into the weekend:

The top priorities in hiring a manager had changed. Now here are the two most important ones:

1. Force of personality: a catch-all phrase for the ability to connect and communicate with young players and to represent the team’s image and brand on a daily basis in front of the media.

2. Fluency in analytics: the belief in data-based decision-making deep enough to serve as an efficient conduit between the front office and the players.