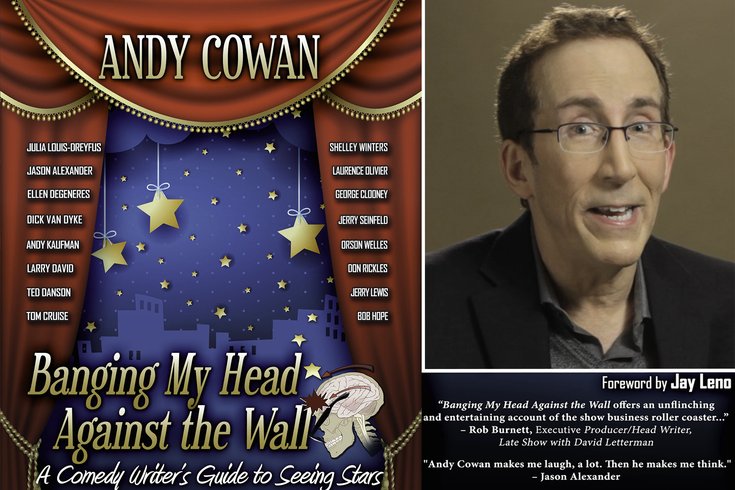 Book cover of "Banging My Head Against the Wall: A Comedy Writer's Guide to Seeing Stars," with inset photo of author Andy Cowan.

From the only writer associated with “Cheers,” “Seinfeld” and “3rd Rock from the Sun” comes a new comedy memoir about the uphill battle that is making it through the industry of comedy and show business. Banging My Head Against the Wall: A Comedy Writer’s Guide to Seeing Stars is a “Seinfeld” fan’s dream, revealing untold storylines that never made it out of the writer’s room.

Andy Cowan has been a writer and script consultant for TV and other media for the last 40 years, including two of the best TV series of all time (“Cheers and “Seinfeld.”) With a foreword written by Jay Leno, the book, released in late June, is what Cowan calls his “creative explosion.”

Cowan pitched many ideas for “Seinfeld” episodes to Larry David over the years, but most of them we're used, however worthy his scripts were deemed by the show's producers. He sometimes saw little gratification from his labor until later in his life. For the in-the-trenches comedy writing that he had (and has), many “Seinfeld” episodes never made it to the tube.

With this book, Cowan opens the vault.

“I really wanted to get my creative projects out there, beyond the ‘Seinfeld’ stuff and the new episodes that people can read and get a kick out of and the celeb dishing a little bit,” he told PhillyVoice.

“I wanted to convey all the creative projects that got so close and people could see for themselves what the process is in terms of pitching and near-success and the disappointments and how you shape the comedy and pitch it and deal with decision-makers and all that stuff. It was therapeutic to get all that stuff out.”

He was the brains behind “The Opposite” episode of “Seinfeld” and many other creative projects. Many of his original cartoons were syndicated, and TV show pilots that were initially green-lit by Fox and CBS didn’t wind up on the air.

Cowan says “The Opposite” is a big theme throughout the book because he always felt like he might have had more career success if he had done things differently early on.

“I wound up pitching that to Larry David, became the big finale that changed George Costanza’s life on ‘Seinfeld’…and later, mine, landing me on staff,” he said.

“I always thought I should have done the complete opposite of everything I’ve done up till now...

[Larry David] really saw something in it, and that’s when I wound up ultimately writing the script for that along with three other stories that become the [series] finale. They changed it by the time it got on the air, but that main premise survived.”

Cowan said it lives on in references in all kinds of fields, from politics to economics that cite that George episode about doing the opposite, and that – for him – is gratifying.

An Abington, Pa. native, Cowan came back to the Philly area after acquiring his undergraduate degree in psychology at American University and then a master’s degree at Boston University in broadcasting. He worked in TV and radio first in Reading and then in Lancaster and Lebanon. California soon called him for bigger things.

“That’s when the itch began in terms of my needing to do something more creative,” he said, and he started doing stand-up. He now lives in Los Angeles, Calif.

Cowan boasts of myriad original creative projects that he finally gets to share with readers, including half-hour comedies such as, “The Evolution of Stan,” “Outer Child,” “Trading Up,” and others. Over the course of his career, Cowan has produced pilot scripts, stand-up comedy sketches, web and radio shows, single-panel cartoons and comic strips and award-winning shorts on which he was also a performer.

He said “Banging Your Head” drills down on the insanity of the business of comedy.

“I still have the opportunity to present, now, in the book, so, to that extent, it’s cathartic to get out there even though [some material] didn’t ultimately see the light of day.”

Despite the ups and downs that are part and parcel of the entertainment business, he's been praised by Jason Alexander as "insanely wise" and called "one of the industry's sharpest comedy minds" by Louie Anderson.

Asked his best advice for aspiring comics trying to climb the ranks in L.A. or New York, he said:

“Don’t worry about what other people are doing and saying. Be faithful to your own voice. If you think you have something to do or say and have a unique spin on something, just cultivate your own uniqueness and keep applying your trade and all the clichés apply.

"Keep writing and writing and rewriting. It’s the act of doing it and gaining confidence that way, so that ultimately, you are presenting your best self and nobody can take that away from you. Just see where the chips fall.”