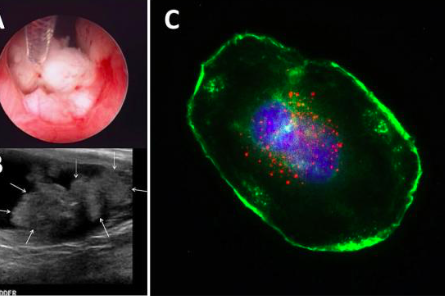 Pet dogs suffering bladder cancer, for which all other approaches failed, were treated with a Purdue University experimental approach using a modified form of anthrax. Researchers believe this model may be successful in human bladder cancer patients.

Anthrax is generally associated with bioterrorism and its deadly contagious properties, but modified versions of the toxin have become a promising tool in the treatment of a variety of cancers.

New research out of Purdue University suggests anthrax could be an effective and far less intensive tool to treat bladder cancer than current methods.

As many as 72,000 Americans develop bladder cancer and 16,000 die from the disease each year, according to the CDC.

Existing treatments often require patients to sit for hours while their bladder remains full of an agent designed to kill cancer cells and tumors.

Despite these treatments, bladder cancer is often reoccurring, which subjects patients to multiple rounds of costly and painstaking treatments.

The researchers at Purdue combined anthrax with a growth factor that specifically targets cancerous cells and tumors in the bladder while sparing all other healthy tissues.

"We have effectively come up with a promising method to kill the cancer cells without harming the normal cells in the bladder," said R. Claudio Aguilar, one of the study's lead researchers. "It is basically like creating a special solution that targets cancer cells while leaving healthy cells alone."

Another benefit of the system developed at Purdue is that it works in a matter of minutes rather than hours.

"It is fast and effective, both of which are critical for people dealing with this devastating disease," said Aguilar, who noted successful results in tests on dogs with bladder cancer.

The research, published last month in the International Journal of Cancer, provides hope that similar genetically altered anthrax strains can be used in human beings.