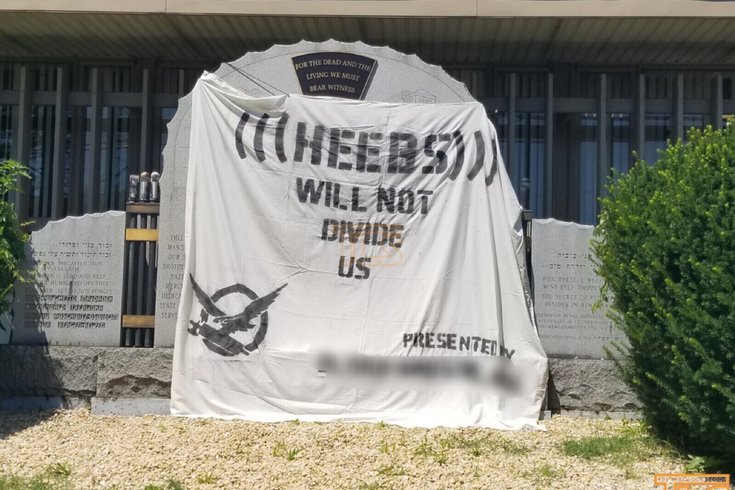 An anti-Semitic banner is draped over a Holocaust memorial, shown here in a photo provided by The Lakewood Scoop. Authorities are also investigating fliers left on car windshields in Lakewood that reference the recent arrests of several married Jewish couples, including a rabbi and his wife, in connection with a welfare fraud case.

Vandals defaced a Holocaust memorial with an anti-Semitic message in a Jersey Shore town that was rocked this week by a well-publicized fraud investigation that led to the arrests of a rabbi, his wife and many others.

Authorities are also investigating whether those same perpetrators also placed anti-Semitic fliers on cars in Lakewood, according to multiple reports.

The fliers referenced the arrest of the Rabbi Zaimen Sorotzkin, who reportedly runs the synagogue Congregation Lutzk, as well as those of his wife and six other married Jewish couples in connection with an investigation that uncovered about $2 million in alleged welfare fraud, the Asbury Park Press reported. The fliers also reportedly included the mugshots of some of those arrested.

More than a dozen people were arrested in simultaneous state and federal raids Monday and Tuesday.

Pictures of the banner were posted online Sunday and provided to PhillyVoice.com by The Lakewood Scoop.

It was reportedly placed over the memorial outside the synagogue Congregation Sons of Israel, described Jewish people with an ethnic slur and stated they "will not divide us."

The message also included the website address for a white supremacy group, according to reports.

State Attorney General Christopher S. Porrino described the acts as "sickening" in a tweet on Sunday, and said the state offers a $10,000 reward for information in bias crimes.

Lake Police Chief Gregory Meyer said in the Asbury Park Press report that he believes the acts are related to the arrests.

"We have not had any other incidents before," he said. "We will not tolerate this kind of behavior and we are working with (the) state and the Ocean County Prosecutor's Office in an attempt to make arrests. We will look to prosecute all incidents of bias crimes that take place against our citizens."

Meyer also said police patrols are increasing because of the incident, and that officers are "working around the clock."

The acts drew widespread criticism and media attention across the state on Sunday.