Why is it called a Unicorn? Uni means "one," and it doesn't have one corn. Shouldn't it be a Unihorn? (@TheCaptainLou via Twitter)

Why are identical clothes called uniforms? Shouldn't they be unioutfits or uniclothes? (@FreemanMcNeil24 via Twitter)

Whoa. This is some heavy stuff here, fellas.

I agree with both of you. Unfortunately, etymologists do not.

Take unicornis though the Old French grinder and spit it out into Middle English and what you have is unicorn. Ta-da!

Also, were you behind Reddit, Quora and Yahoo threads on this very question?

Anyway, we should step up and make that word American now. Let’s start calling unicorns by the name unihorns. Just ignore those Urban Dictionary entries that work zits and hairstyles into the mix.

As for the uniform question, blame the French and Romans, too.

Will Lionel Messi sign with the Philadelphia Union towards the end of his career? (Greg O., via Facebook)

No. He’ll do a pre-retirement victory lap where it all began: With Newell’s Old Boys. If, of course, he ever has to retire. Messi may be immortal, for we've never before seen anyone play like Him, nor will we again.

And it breaks my damn heart.

It's probably for the best, though. I don’t think Philadelphia – let alone me – could handle it. Do you, Greg? Seriously, do you?

In this week of giving thanks, I couldn't be more grateful for our fine readers at PhillyVoice. Y'all some good people, even if some of y'all get way too rammy in the comments sections. But, whatever. We're all God's children, so I'm grateful for you, too.

All of which is to say, when I put out a call at the end of my rant vs. the traffic light at 15th and Ranstead in Center City,  many of you responded with what you deem the worst traffic lights in the city of Philadelphia. What follows is a collection of your responses. Maybe this will force those lights to rethink their lives and do better by the world.

Fourth and Callowhill. Where morons make turns from the wrong lanes.

30th and JFK. The 6 a.m.-6 p.m. no turn on red sign at a "glorified pedestrian light" gets disrespected so often, it's meaningless.

Broad and Montgomery. Temple U. student volume makes it impassible. How about some better timing there, light?

Fox and Abbottsford. What's up with a 5-second green light and 5-minute red light, yo?

Broad and Ridge on Ridge. "Ugh."

Ridge and Fairmount. Right near the above entry. Cars and pedestrians have green at the same time. Not a good combo.

The "South Street Bridge and its 52 traffic lights and traffic patterns." An unmitigated disaster.

Kelly Drive on the side of the Philadelphia Museum of Art. See photo herein.

"The one that doesn't exist at Frankford and Belgrade."

"Every single light on Spring Garden from Delaware Avenue to the 20s. The timing is completely off. You end up waiting at every. single. light."

Grays Ferry and University Avenue. "It's like 3.5 minutes spent in Hell."

23rd and Bainbridge and 24th and Grays Ferry. See Colin's image below: 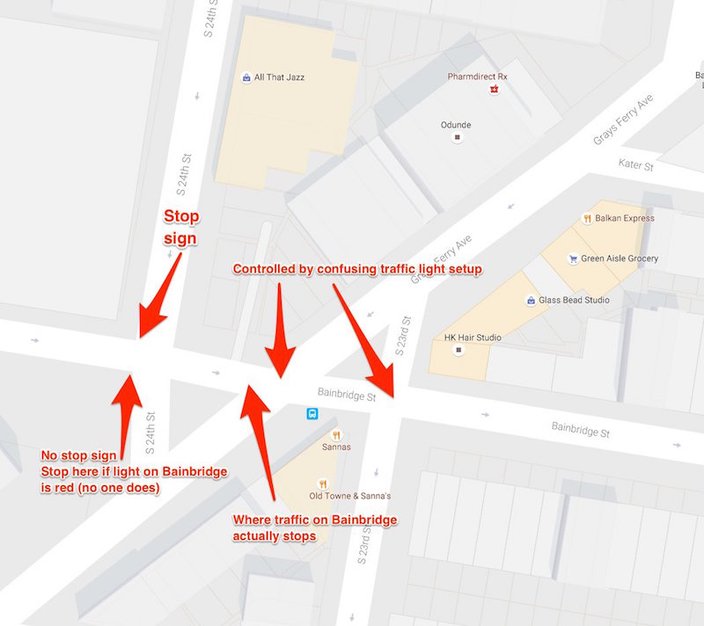 A reader breaks down the woes of his least favorite traffic intersection in Philadelphia.

Where Lancaster, Lansdowne, 52nd and smaller streets come together in Parkside. "We NEED to turn on red to keep traffic flowing, especially when the trolley is coming."

In between 16th and 17th, where Passyunk and Snyder criss-cross. See photo.