At Temple, a drive to engage students ahead of Pennsylvania primary, mid-terms 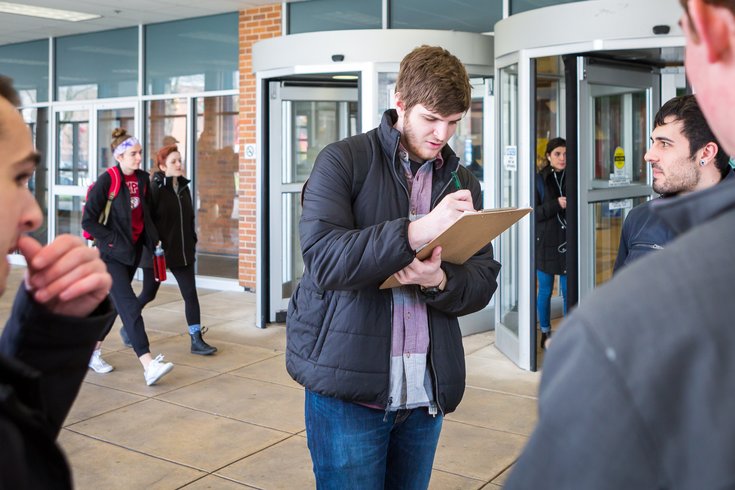 "In 2016, it seemed a lot of people were really into the election," Rego said on Tuesday afternoon. "A lot of candidates were coming to campus. For the primaries and mid-terms – especially this early – it feels like people are forgetting about it."

As Rego spoke, a pair of NextGen America volunteers conducted a voter registration drive inside the atrium of Temple's Johnson and Hardwick Hall.

Most students walked by the volunteers, dismissing their efforts with a variety of uninterested glances, simple declines and acknowledgments that they already were registered to vote.

Monday marks the last day people can register to vote for the May 15 primary elections in Pennsylvania. Several local congressional candidates face primaries, with perhaps none more intriguing than the Democratic primary in the new Fifth District.

But widespread interest is not evident on campus, several Temple students said.

"If it was a general election, I think there would be a lot more hype for it," said Rego, a senior from East Providence, Rhode Island. "Hopefully, we'll see some when (Gov. Tom) Wolf and (Sen. Bob) Casey are up for re-election."

Indeed, the gubernatorial and senatorial elections will draw plenty of attention come November. So will a bevy of congressional campaigns, thanks to newly redrawn districts and a pair of local Republicans forgoing re-election.

"NextGen believes that young people are progressive and will make the right choices in the voting booths," NextGen Media Manager Victoria Vinall said. "We're not pushing any specific candidates, but trying to push student turnout in the primaries and the mid-terms."

The organization, founded by environmentalist Tom Steyer in 2013, was hosting more than 200 voter registration drives across the United States on Tuesday, including 30 in Pennsylvania. (Steyer is the California billionaire behind the "Need to Impeach" movement urging the impeachment of Trump.) Vinall said NextGen had registered more than 2,000 Pennsylvania students for the upcoming primary.

"I think it was a big wake-up call that I needed to start becoming more active and waking up other people I know. I was sure Hillary was going to win. When she didn't, I realized I needed to start doing something." – Arli Necowitz, Temple freshman

Teams of NextGen volunteers spread across the Temple campus in an effort to register as many students as possible.

Caitlin Luong, a freshman from Ephrata, Lancaster County, registered to vote as she walked through Temple's student center on Tuesday afternoon. The primary election will mark the first time she has been able to vote.

Though she has never been actively engaged in politics, Luong said recent political events have made her realize the importance of voting.

Across campus, Luong said students' political interest ranges from active involvement to complete apathy. Those that are engaged have been encouraging others to participate, she said.

"There's definitely students who participate in these things," Luong said. "But there are also students who don't know anything."

Similarly, Anthony Passaro, a freshman who registered to vote in Voorhees, Camden County, said many students are not terribly informed, even if they hold a political viewpoint. 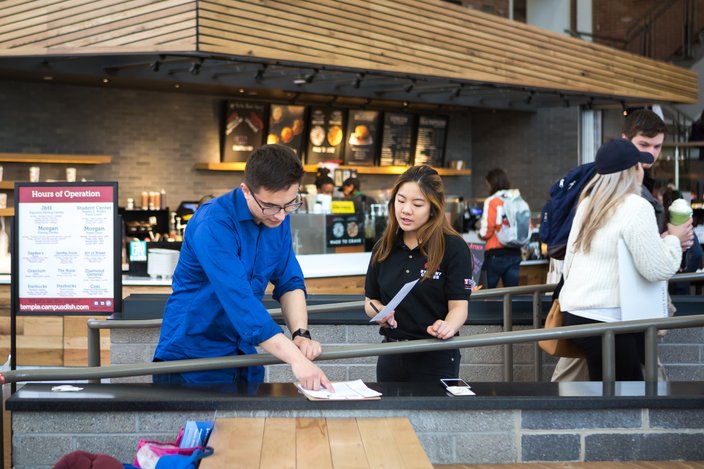 "It's kind of the popular position to hate Donald Trump," Passaro said. "I think the extent that people know about Donald Trump is what they see on "Saturday Night Live" – we should hate him."

Passaro said he tries to keep up with world and national news via BBC, though he admits it can be challenging at times due to the workload of his college classes. But he stressed the importance of knowing your congressional representative and local leaders.

The electorate has greater power to hold senators and Members of Congress more accountable than it sometimes realizes, he said. That's why he would have supported Alex Law, a progressive Democrat, when he ran two years ago against incumbent Democrat Donald Norcross.

"It goes a lot bigger than the presidential election," Passaro said.

Like NextGen, the Temple College Democrats organization was working to register students to vote on Tuesday with its own booth inside the student center.

"I think we want to get more students to come out and vote," said Sarah Paroya, a freshman from Yardley, Bucks County. "Turn it blue. It was sad that Pennsylvania was red the last election."

Temple is a liberal campus, Paroya said. But she said many students aren't aware of how down-ballot races – and primaries – can impact the direction of the country.

Her friend, Arli Necowitz, said she became more heavily involved in politics after Trump was elected president. She previously had canvassed and served in a phone bank for Hillary Clinton, but Necowitz rushed to sign up with the Temple College Democrats last fall.

"I think it was a big wake-up call that I needed to start becoming more active and waking up other people I know," said Necowitz, a freshman from Yardley. "I was sure Hillary was going to win. When she didn't, I realized I needed to start doing something."

The Temple University College Republicans also are active on campus. But they did not have a booth set up on Tuesday, nor was anyone available to discuss the midterm elections.

"I think we need to start getting students more engaged," Necowitz said. "2018 is a very important election."