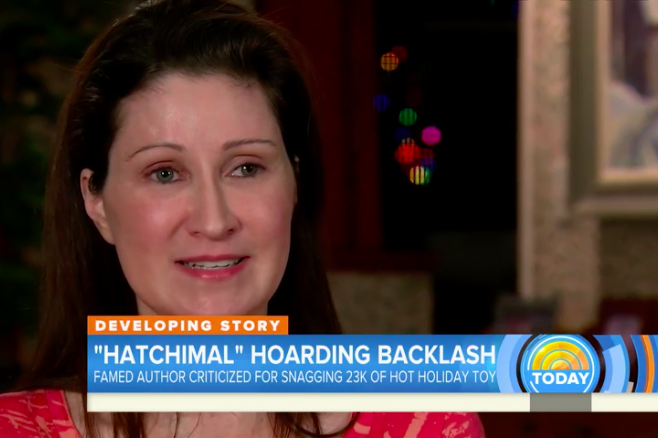 Author Sara Gruen went on national television on Monday, December 12, 2016 to tell the full story about what sparked her 'Hatchimals' buying spree the day after Black Friday.

Last week, we brought you the story of Sara Gruen, who found herself facing a financial quagmire after purchasing more than 150 Hatchimals to help fund the legal defense of a convict she believes to be innocent of murder.

In the days after her story spread on the internet, she faced an onslaught of criticism from people casting her as the Grinch Who Stole Hot-Button Christmas Items from Children. But this week she went public with the details of that case.

She laid it out on her “now empty store’s storefront,” with details including:

Welcome to the Gruen Zoo, a little online store whose unique mission is to get justice for Charles Murdoch, a wrongfully convicted man who was sentenced to LWOP (Life Without Parole) 23 years ago, and who has been incarcerated since.

The case is Murdoch v. Castro, and I encourage everyone to look at the appellate decision from the En Banc hearing of the Ninth Circuit Court on June 21, 2010.

About a year and a half ago, by sheer happenstance, we became aware of Chuck's situation and realized that if we didn’t do something, nobody would. We live by “The Golden Rule,” and realized we wouldn’t be able to live with ourselves if we didn’t do everything in our power to help.

100% of the proceeds from our sales will go toward the legal fees required to get Chuck's case back in front of the Supreme Court, which we hope to do early in the new year.

Gruen, who wrote “Water For Elephants,” a historical novel about the Depression-era circus, also made a Monday appearance on "The Today Show" to talk about Hatchimals and the case behind it. She said she sold out of the toys on Friday, and made an average for $30 per sale for the defense effort.

"I'm ecstatic to have seen the last of the wretched things!" she told PhillyVoice on Monday night, noting that anymore than might show up at her door will be donated to Toys for Tots.