By Bryan Bierman
PhillyVoice Contributor
Bad For You Milkshake 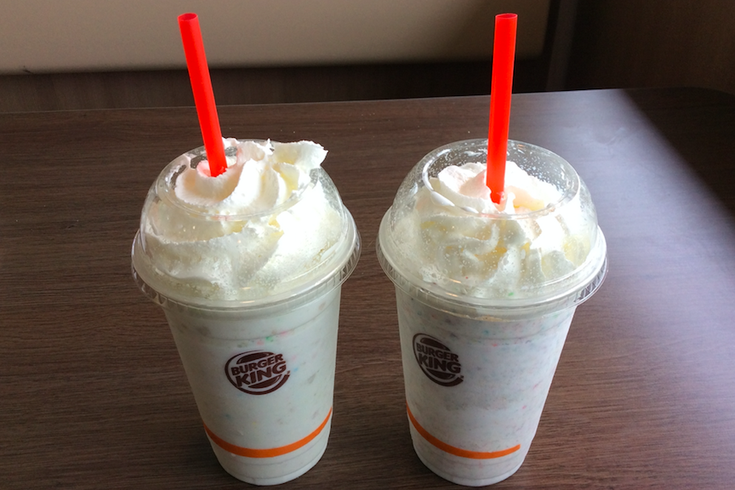 The nutrition result of this is a whopping 107g of sugar for the Lucky Charms version and 103g for Froot Loops.

Back in 2004, I remember hearing about a café that only sold cereal opening in University City. What a great idea, I thought.

Five years later, Cereality closed for business. All of their other locations have since closed, except for one in Terminal C of Dallas-Fort Worth Airport. Perhaps they were ahead of their time. Perhaps people realized they could buy a whole box of cereal for the price of two bowls.

Still, the idea of using cereals as ingredients is a great idea, having shown up in desserts as mix-ins for years. And yet, there’s so much more to do: Apple Jacks apple pie, Cinnamon Life brownies, Cocoa Puff-infused birthday cakes. I just came up with those off the top of my head and each one sounds amazing.

Recently, the King of Burger has tried its hand at a cereal dessert in the form of two shakes featuring two iconic cereals, Lucky Charms and Froot Loops.

Cereal and ice cream (and even its lesser cousin, yogurt) have been an item for some time. Many ice cream shops and chains feature various flavors of the breakfast staple as a topping and even local rolled ice cream spots have gotten in on the action.

Even though ice cream is just frozen milk, turning into a milkshake is a pretty significant change for a cereal. Logistically speaking, BK’s new shakes are made using their vanilla soft serve, crushed-up pieces of Lucky Charms or Froot Loops and then a syrup-version of the respective cereals is blended in.

The nutrition result of this is a whopping 107g of sugar for the Lucky Charms version and 103g for Froot Loops. I believe this is the highest sugar content of a Bad For You item yet, slightly edging out McDonald’s Chocolate Shamrock Shake. It’s enough to possibly send a small child running for the hills in a maniacal sugar rush trip if they were to drink a whole one.

But this is Bad For You, where I have no respect for my body. So the more important question is how does it taste? 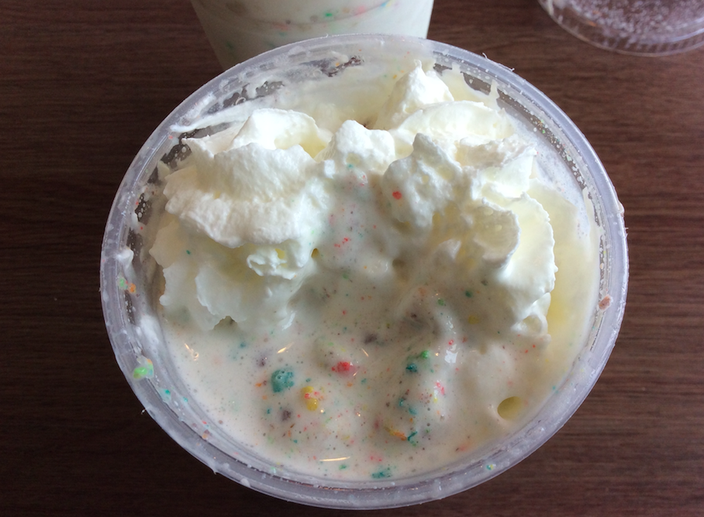 This is a complete overload of sweetness, which is great if you have a really big sweet tooth. To others, this may be way too much of a good thing.

Let’s start with the Froot Loops shake, as that was the better, or least worst, of the two. The crushed-up Loops pieces do not get stuck in the straw as I had originally feared and were a unique addition texturally. However, there is an inherent problem with the drink—it tastes like Fruity Pebbles.

While it’s true that Froot Loops and Fruity Pebbles are a similar-tasting cereal, this shake has the “bolder” fruit flavor of Fruity Pebbles, more so than its namesake. Perhaps since the actual loops in Froot Loops are bigger than Fruity Pebbles, you can better taste the multi-grain and that in turn somewhat diminishes the fruit flavor, hence the now bolder flavor in the shake. Or the slight mis-flavor of a classic is enough to make it very noticeable.

In any case, the end result was super-sugary, and overbearingly so.

The Lucky Charms variant works even less well, with the syrup adding too much of the oat piece flavoring in it, which throws off the intricate balance of the original. The oat pieces are there to cut the marshmallows’ sweetness from becoming too powerful. Yes, they’re the worst part of Lucky Charms but they serve a very important purpose, something I didn’t understand as a kid picking out the horseshoes and shooting stars. But here, there’s too much oat taste, combined with way too much sugar. Just a mess.

Verdict: If you love über-sweet stuff, this might fulfill your need. For the rest, including fans of the cereal, this is a syrupy disappointment.