Before the blaze: Parts of destroyed Old City building to be featured in new film 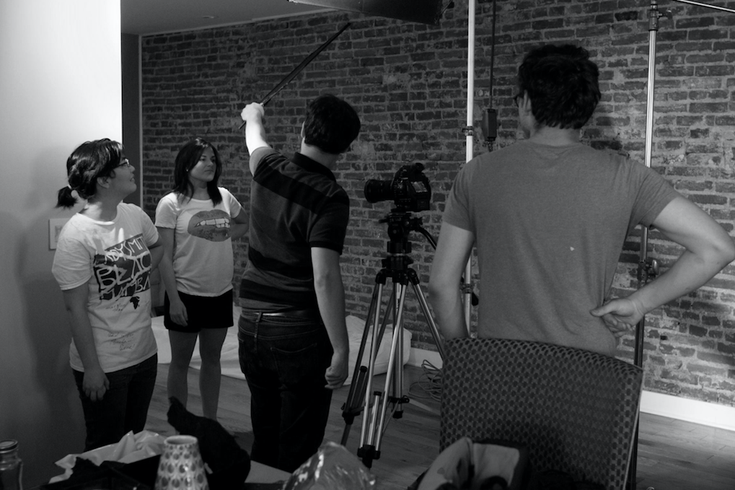 A still production shot of "They Are Strangers" inside 239 Chestnut St. in Old City.

The six-story apartment building at 239 Chestnut St. is today a shadow of its former self after the four-alarm fire that ripped through it in the early hours of Feb. 18, displacing about 160 people in the area and killing multiple animals.

Demolition of the burned-out building began in early April, but film lovers can catch a glimpse of the Old City building in its previous state at the Philadelphia Independent Film Festival on May 4.

A significant portion of “They Are Strangers,” one of the films selected to screen at this year’s festival, was shot in the summer of 2016 in one of the now-destroyed building’s condos.

The film chronicles successful writer Rebecca Thayer’s journey of struggling through writer’s block in the midst of a downward spiral after discovering her boyfriend’s possible betrayal.

Many of the scenes were filmed in executive producer Robert Singh’s condo at 239 Chestnut St., said “They Are Strangers” writer and director Zane L’Erario.

“We already had some locations picked once we started working on the film, and after Robert came onboard, he said, ‘Do you guys want to use my place?’” L’Erario told PhillyVoice.

“It was a really nice apartment, so it was kind of a no-brainer.”

Singh opened his home to the production crew, housing his family in a hotel for a month as principal photography rolled on.

Nearly two years later, Singh’s home and one of the key shooting locations for the independent film went up in flames, stunning the entire crew.

“It was pretty wild,” L’Erario said. “We had to actually send some photographs to his insurance company that we had taken on set so that they could see what was in his apartment.”

Singh wasn’t home, but his two children were inside the doomed apartment building as fire alarms rang out at 3 a.m.

“They were able to get out,” Singh said. “[A neighbor] went and knocked on the door to make sure that my kids were up, and they grabbed the dog and went downstairs.”

“You could say that my neighbor saved my children,” he added. “That type of community is hard to come by, sometimes.”

We had to actually send some photographs to his insurance company that we had taken on set so that they could see what was in his apartment.”

After “They Are Strangers” was selected for the Philadelphia Independent Film Festival, L’Erario approached festival director Benjamin Barnett about how to utilize the exposure to support the Old City community after the devastating fire.

“I lived here for about 10 years, and I’m very attached to this neighborhood,” L’Erario said.

“I know how many people were displaced by the fire.”

The film festival will donate proceeds from “They Are Strangers” to the Old City neighborhood if they’re able to pack the more than 300 theater seats the night of the screening.

The crew will also set up a donation box throughout the festival’s entirety along with information on the fire.

“We want to make sure that we do whatever we can to give back to the community,” L’Erario said.

The 2018 Philadelphia Independent Film Festival runs from May 2-5.