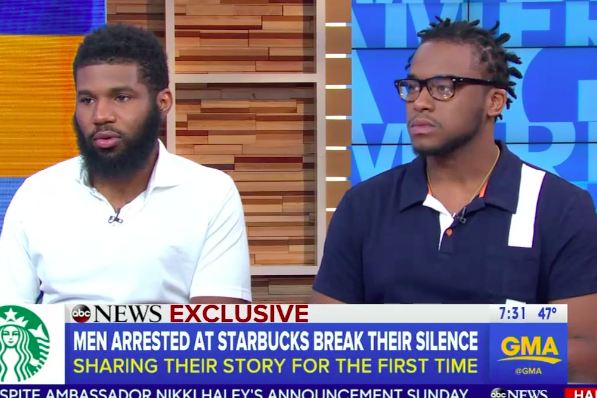 There is, understandably, a lot of noise surrounding the Starbucks incident in Philadelphia, in which two black men were arrested and perp-walked out of the coffee chain's location at 18th and Spruce.

As with any national news story dealing with race, there will be those who suggest that the way Rashon Nelson and Donte Robinson, both 23, were treated didn't have to do with race, or that they could have prevented the whole thing by simply buying a drink or leaving the store.

Sadly, it's nearly impossible to convince some people that implicit bias — or just flat-out bias — has an impact on the way people are treated. There is plenty of evidence to suggest race was a factor in the Philadelphia Starbucks fiasco, and I'll let someone smarter than me explain why.

Yet as the story develops — after the protests and responses from city officials and Starbucks — what's lost in some of the national conversations are those pesky details. Nelson and Robinson appeared on "Good Morning America" Thursday to discuss the incident. Their entire interview is worth a watch, and you can do so at the bottom of this article, but listening to their comments reminded me of the incredible timeline of events:

• 4:35 p.m. - Nelson and Robinson arrive at the Starbucks 10 minutes early for a business meeting. Nelson immediately asks to use the restroom but is told its only for paying customers. He sits down with Robinson and the manager comes over to ask if they want anything, they explain they're fine and are just waiting for their friend.

Two minutes — two! — before police were called. Six minutes before officers arrived. Any attempt at a nuanced discussion about store policy feels pretty dumb when you realize Nelson and Robinson barely had time to check their emails before there were cops standing in front of them. I can't imagine being asked to leave a coffee shop — let alone being asked by law enforcement —  in less time than it takes to make a latte, although I think I know why I'm having trouble fathoming such a scenario.

Watch Nelson and Robinson's interview below, and keep this number in mind: two. It was two minutes before these guys were deemed such a problem that police were necessary.