Believe it or not: Trump museum proposed for Atlantic City 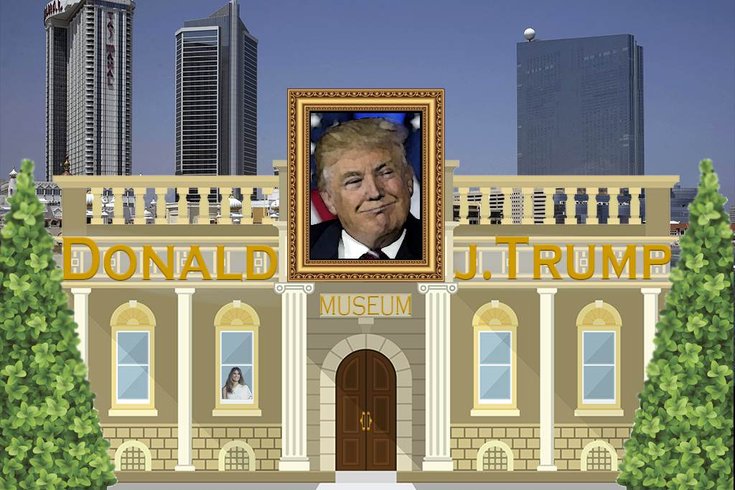 Or better yet, make it the “Age of Trump in Atlantic City,” spitballed Fox, a 36-year-old resident of Somers Point who freely admits the plan for now is in the trial balloon stage – subject to change with public input and hoped-for financial support.

Besides, a “Trump Museum” perhaps sounds a bit too official and sanitized, Fox added Friday.

Fox offered the “Age of Trump” alternative title because he realizes there is no one simple clear consensus way to see Trump’s footprint on the town.

A former casino executive suggested yet another name possibility: “Trump’s Believe it or Not” museum.

There was a time when Trump and Atlantic City were synonymous, though the two Boardwalk casinos he once owned are now shuttered while the third, in the Marina, has thrived with new ownership.

Trump, the president-elect, owned Atlantic City casinos from 1984 to 2009. He promoted marquee boxing bouts and employed the likes of Michael Jackson to promote the largest property, Trump Taj Mahal.

"What would be the draw of visiting the site of his biggest recurring business failures? Seeing the ghost of the letters of his name on Trump Plaza?"

But is also the town where his properties declared bankruptcy on six occasions, sometimes repeatedly on the same property.

Trump was also a notorious slow-payer in Atlantic City, dragging out payments, then offering to pay only at a discounted rate.

Both his bankruptcies and his slow-pay practices devastated many local businesses.

Trump conducted an affair with then-mistress and later wife number two, Marla Maples, in Atlantic City at his Boardwalk properties, while placing his first wife, Ivana, in charge of his remote property, Trump Castle, in the Marina District.

And it’s also where he infamously tried to court and cajole, then bully and belittle, then finally sue – and lose – in an effort to seize the private home of Vera Coking to make way for a Trump Plaza limousine lot.

Fox said Trump’s business practices in Atlantic City indicate he may have paid more attention in business law courses while at the University of Pennsylvania’s Wharton School and less attention to business ethics classes.

Fox said he knows there are as many negative views of Trump as there are grains of sand on the city’s beaches.

SPITBALLING: NOT ONE WALL, BUT TWO

Numbers seem to indicate locals have not forgotten or forgiven Trump.

The endorsed candidate of the Republican Party of Atlantic County, which includes Atlantic City, Trump lost the Republican-oriented county by about 7,000 votes – 54,472 to 47,882.

One who has not forgiven is Rosalind Norrell-Nance, once an aide to the late Mayor James L. Usry, the resort’s Republican mayor from 1984 to 1990. Norrell-Nance later became the president of City Council.

“Now I'm truly convinced that some people have lost their minds!” said Norrell-Nance, when asked about the notion of a Trump museum in the Jersey Shore city. “Trump ruined so many small and minority-owned businesses. His unbelievable remarks about women and others are despicable.

“Will this proposed museum include the history of what a negative impact Trump had on Atlantic City, its residents and his employees?” she asked.

Well, said Fox, the negative should be included.

“We want to be fact-based and historical,” said Fox, an adjunct instructor at Temple and Stockton University, just 10 miles inland from the casino town.

“To think that this will draw visitors to the city and not instead repulse a region that overwhelmingly rejected Trump’s candidacy shows the same foolish myopia that has left the city broken."

Fox sees himself as a popular historian who is intent on “sharing authority” for the proposed museum’s message.

But deciding on which message may take some doing, he admits.

But how to do that?

Fox said Trump’s actions and legacy might best be told through parallel walls, a point – and counterpoint – presentation.

Perhaps the Mexican government will chip in for a wall on one side of the museum?

Fox admits he is aware of Trump’s bullying and vindictiveness firsthand; his stepfather was an advertising executive at The Press of Atlantic City newspaper during the Age of Trump.

Every time Trump was displeased with a story in the local newspaper, he had the newspapers pulled from his casinos, refusing to sell or deliver them. Ads for entertainment shows at his casinos were also pulled and redirected to other newspapers.

After one such fit, the newspaper refused to accept Trump’s classified advertising, which at the time was crippling to Trump's operation. Trump soon went back to carrying The Press and placing ads with the paper, but bad blood continued with Trump or an underling routinely calling reporters and cursing.

Fox said maybe the best way to tell the history of Trump in Atlantic City is through individual narratives from people affected by Trump, narratives “that speak for themselves.”

“There are a lot of complexities. There are very different views of him. I’m not shocked at all that people are skeptical,” he said.

“What would be the draw of visiting the site of his biggest recurring business failures? Seeing the ghost of the letters of his name on Trump Plaza? What used to be his casino in the Marina now successful under a new owner? His closed Eighth Wonder of the World?”

The executive also suggested Trump would fight the use of his name unless it was for a “shrine,” but added putting a museum in a city that once thrived by exhibiting incubator babies along the Boardwalk would be “fitting.”

“My question is what sort of museum would it be? Is it going to be a celebration of the brass-and-glass '80s, genuflecting on the days when Trump-backed heavyweight fights packed the city?" he asked.

“We need money. It might not happen." – Levi Fox, of the possible Trump museum in Atlantic City

“Or is it going to consider his shaky foundation of bad debt, the bankruptcies and betrayals, and the attempted manipulation of political processes large, such as a tunnel and connector to the Marina away from the center of the city, and small, such as Vera Coking?

“Will it show how that history is prelude to the present?” asked Harper, a resident of Philadelphia.

A federal attorney who once worked in Atlantic City doubts the appeal of a Trump museum.

“To think that this will draw visitors to the city and not instead repulse a region that overwhelmingly rejected Trump’s candidacy shows the same foolish myopia that has left the city broken,” said the lawyer.

Fox admits his proposal is all very preliminary still at this stage, with no artifacts to display – and no cash to pay for the work of assembling any exhibit.

“We need money. It might not happen,” said Fox.

He said he intends to approach the Casino Reinvestment Development Authority, where he interned 15 years ago, as a possible source for funds.

He’d like to test the waters, perhaps with a pop-up exhibit, maybe in the public space next to Boardwalk Hall, the Adrian Phillips Theater. Perhaps in July and August.

Meanwhile, he’s looking for artifacts and input. (Fox can be contacted here or via Facebook at TrumpMuseum.org.)

And consider this: Maybe Atlantic City is exactly the right place for the Trump presidential library.