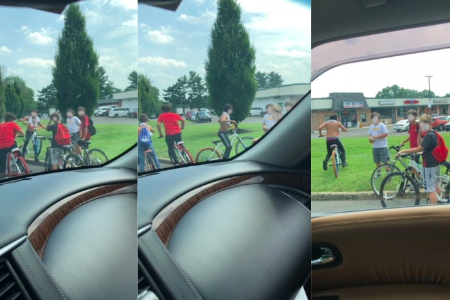 Children photographed after deliberately blocking roadway traffic in Bensalem, according to local police.

Conversations about cyclists in Philadelphia generally revolve around how to create a safe and fair environment that balances the needs of all modes of transportation in an old and densely populated city.

In Bensalem, the Vision Zero initiative does not seem to be at the top of the priority list for local police.

On Monday, the Bensalem Police Department issued a news release with information about a "dangerous trend" involving young people who occupy roadways and shout obscenities at drivers who are stuck in the middle of the street.

"To be clear, these kids deliberately impeded the movement of vehicles on the roadway," authorities said. "These children appear to be empowered by a group mentality. They believe that they will not be identified or suffer consequences for their actions. THEY ARE WRONG! These children have been identified and the appropriate police actions are being taken."

It appears the appropriate law enforcement action for a violation of "Vehicle Code Chapter 35 - Operation of Pedalcycles" is a citation.

Authorities are urging residents to call 911 immediately and take photos of the children, if possible, to provide to responding officers.

The wording of the department's message also strongly implied that this type of behavior could potentially result in road rage — not just an accident — and an outcome that would be devastating for everyone involved.

"The Bensalem Police Department is dedicated to the safety of our children and residents," police said. "We need everyone's help with this problem so that we can prevent a tragedy."

Clearly, these kids are getting their invincibility and entitlement from somewhere.