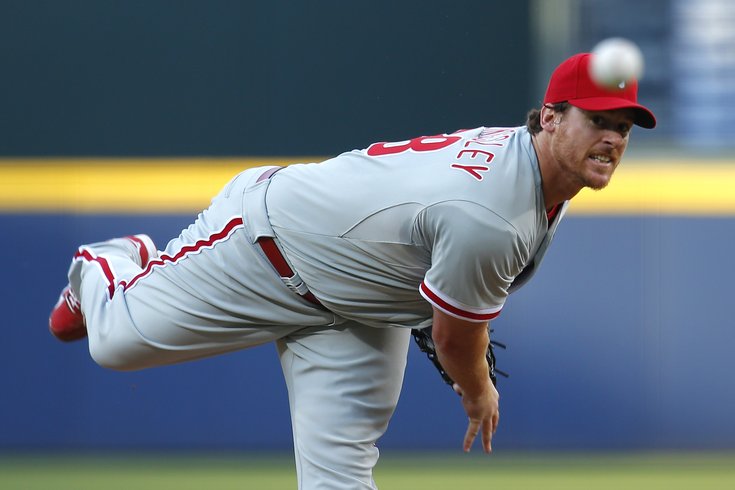 This probably wasn't how Chad Billingsley -- he missed the last two years with elbow injuries -- envisioned his night going.

With the Phillies looking for their first three-game winning streak of the season, Billingsley took the hill in Atlanta for the first time since April 15, 2013. However, it was Shelby Miller's night at Turner Field, as he tore through the Phillies lineup, tossing a complete-game shutout, allowing just three hits en route to a 9-0 Braves' win.

Here are some observations on the loss, which lowered the Phillies' record to 10-18 on the season:

The Braves came out swinging against the 30-year-old righty, as Freddie Freeman hit a two-run home run in the bottom of the first to get the scoring started for the Braves. After the home run, it appeared as though Billingsley began to settle in, retiring seven of the next eight batters he faced through the second and third innings.

He began to mix in his curveball with more regularity as the game progressed, and for a moment it was easy to forget that he had gone 750 days between starts.

In the fourth, however, the floodgates opened four the Braves, who put up four in the innings, three of which came on one swing by Kelly Johnson. Then again, it wasn't all Billingsley's fault.

With runners on first and second, Jonny Gomes hit a grounder under the glove of third baseman Cody Asche, who was charged with an error on the play, allowing Freeman to score. The next batter, left fielder Kelly Johnson, drove a 3-2 pitch into the seats in right-centerfield to give the Braves a 6-0 lead.

Even though a clean play from Asche wouldn't have prevented all those runs from scoring, it certainly would have helped keep Billingsley's pitch count down, something imperative for a pitcher coming off back-to-back elbow surgeries. And obviously, who knows how he would have pitched differently to Johnson had Asche been able to turn the double play, or at least get one of the outs.

Billingsley was pulled in favor of a pinch hitter after five innings and 77 pitches. His final line looked like this:

It certainly wasn't the debut Billingsley had hoped for, but, all things considered, it wasn't as bad as the score indicated. And in no way can you blame him for the loss. Not when his teammates manage just three hits all game.

Utley out of the lineup

Second baseman chase Utley was out of the lineup Tuesday night, and for good reason:

A day off for Chase Utley. He was an 0-for-4 away from batting .099 on season. pic.twitter.com/EckfSreTC0

He's hitting just .103 this season, but he couldn't possibly have looked any worse than the rest of the Phillies looked against Miller. Rich Hofmann wrote more about Utley's struggles, here.

Another interesting possibility as to why Utley is getting a "mental break" -- at least that's what manager Ryne Sandberg called it -- is that his contract contains a vesting option for 2016 if he reaches 500 plate appearances this season. If that option vests, Utley will be owed $15 million next season. If not, it becomes a team option that will be worth anywhere from $5 million to $11 million, depending on whether or not he spends time on the disabled list, and also contains a $2 million buyout option.

It's likely too early for the team to be thinking about Utley hitting that mark, but it's not out of the realm of possibility. Hey, he's struggling. Let's sit him down for a few games; it could wind up saving us millions when the seasons over.

Utley's absence wasn't the only thing different about Tuesday night's lineup. It also had Ben Revere -- .359 average in previous 10 games -- in right field for the first time in his Phillies career. That move was made in order to keep Darin Ruf -- 8-for-16 in his last four starts -- in the lineup.

The move seemed to backfire, as both Revere and Ruf were hitless.

Howard back above Mendoza line ... briefly

Ryan Howard saw his average rise above .200 for the first time in over two weeks after hitting a double off Shelby Miller in the fifth inning.

Don't worry, after finishing the game 1-for-4, Howard's average is back down at .195 for the season.

How the Phillies helped Shelby Miller

Miller needed just 31 pitches to get through the first four innings on Tuesday night. He allowed a hit but faced the minimum of 12 batters, meaning each Phillie was averaging just 2.58 pitches per at-bat.

Sure, they entered the night last in the majors in terms of pitches per at-bat, but this something else. You're never going to win with that type of plate discipline.

Later in the game, the Phillies got a lesson in what can happen when you actually take a few pitches. In the bottom of the seventh, Dustin McGowan walked four out of the first five hitters he faced, allowing the Braves to score a run without even putting a ball in play and increase their lead to 7-0. They would add two more runs in the inning.

Elvis in the building

Billingsley wasn't the only pitcher making his Phillies debut. Reliever Elvis Araujo entered the game in relief of Billingsley in the sixth and after getting in a jam, the 23-year-old lefty struck out back-to-back batters to escape the inning unscathed. His final pitch was a nasty 95 mile per hour fastball on the outside corner that froze veteran Nick Markakis.