Since exploding on the world scene in 2009, the decentralized, digital money known as Bitcoin enjoyed a brief moment of notoriety in Philadelphia before seemingly falling out of favor, like a $2 bill.

Never heard of Bitcoin before? Don't feel bad. According to a study conducted by Coin Center using Google Consumer Surveys, around 65 percent of Americans have no idea that Bitcoin is a peer-to-peer payment network with no central authority or middlemen that is a form of virtual currency, or cryptocurrency,  stored and spent from a digital "wallet."

Yet efforts continue to get more companies and customers in the Philadelphia region to understand and accept Bitcoin, whose value fluctuates like the exchange rate between the dollar and the euro.

Philadelphia Brewing Company became the first U.S. brewery to accept Bitcoin as payment for both retail and wholesale purchases in January 2014.

Mike Coburn, who has worked for the beer company for more than five years,  said the number of people using Bitcoin as a payment method has gone down since the company first began accepting it last year.

"I would say probably once every two months someone will come in and use it," Coburn said. "It sort of died down. When we first announced that we were doing it, people were coming in every week. A lot of the more 'tech-y' people would use it, but it has died down a lot."

Street Glitter Gallery on East Girard Avenue in Fishtown is recognized as being the first brick and mortar establishment in Philadelphia to accept Bitcoin.

"We were interested in expanding our customer base and thought Bitcoin was a good way to target some customers who may not have heard of us otherwise," explained co-owner Tami Horvath. "We were also interested in what Bitcoin was and how it could impact the retail environment. We don't get a ton of Bitcoin sales monthly, but around the holiday season we get quite a few. We feel that it is still a new concept and most people still don't fully understand it, but we are happy to continue to accept it as payment." 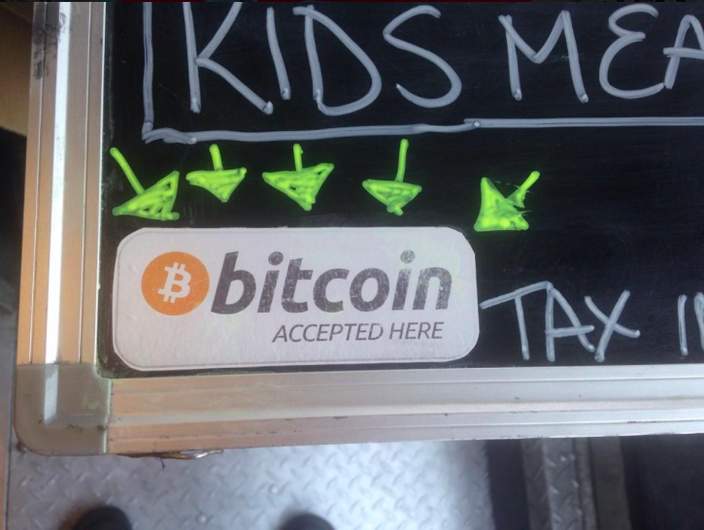 Sum Pig Food Truck is just one of the many places where Bitcoins are accepted in Philadelphia. (@SumPigFoodTruck/Twitter)

Kristov Atlas, a local leading expert in Bitcoin privacy and security, co-organizes Philadelphia's Bitcoin meet-up group, BitcoinPHL, which meets from 6:30 to 8:30 p.m. on Wednesdays at 30th Street Station. One goal of the group is to help local business owners start accepting Bitcoin for their products and services. So far, interest in Bitcoin has been inconsistent, he said.

"I would say that Philly has one of the larger meet-ups in the country," Atlas said. "In terms of businesses looking for help, it’s definitely on the map. We have the high population of a large city, but also Philly is fairly technologically-savvy. The level of interest tends to follow the price of Bitcoin pretty closely. Moving forward in Philly, what we’re going to see is the price go mostly higher, but it may also go lower. The level of interest is going to be erratic.

Some shop owners see Bitcoin as a way out of the costs of accepting Visa and Mastercard for purchases.

Other Philadelphia businesses that accept the alternative money include Sum Pig Food Truck and Cavanaugh's Rittenhouse.

TAKING IT TO THE NEXT LEVEL

BitcoinPHL members Kyle Powers and Chris Yim are the founders of the first public Bitcoin ATM in the United States, Liberty Teller, or LibertyX. The first machine was launched in February 2014 at South Station in Boston.

Owner Tom Truitt said he got into the vending machine business by accident. He began researching the types of hardware he would need to interface with vending machines and how to communicate with them. Through the process he met software engineers at Nimbleus, a company in Springhouse, Montgomery County.

Realizing that their goals coincided, they decided to combine efforts.

"I have no doubt in my mind that Nimbleus will provide a state-of-the-art software system," Truitt said. "They have a very good track record." 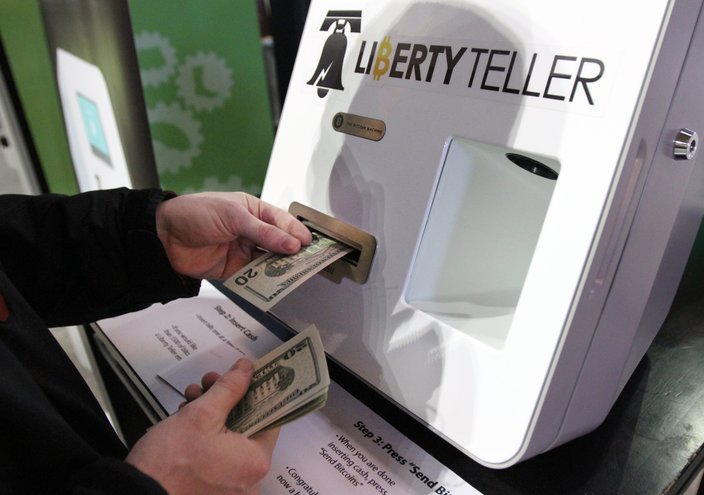 Truitt believes the age of cryptocurrency is here to stay and will only become more prevalent in the future.

"I don’t see any reason why 10 to 15 years from now every vending machine won’t accept cryptocurrency, or some form of it," he said. "Most merchants will accept it. It’s efficient and scalable. As it becomes easier to use, it’s just one more avenue that people can use. We still use vending machines. Why not upgrade them to match the payment technology we’re using for fast and easy, convenient mobile transactions on-the-go."

According to Truitt, the software will hopefully be ready within the next month.

"I’m excited to be on the forefront of technology with the team I put together to be able to provide a solution that will push this new technology and make things more convenient and easy to access."

Much of the debate regarding Bitcoin has centered around the issues of anonymity and the potential for fraud.

In his e-book, "Anonymous Bitcoin: How to Keep Your ฿ All to Yourself," Atlas provides readers with a how-to guide on using Bitcoin privately and anonymously. The book clears up misconceptions about anonymity, analyzes the current state of Bitcoin privacy and offers advice on how users can keep their financial history private from investigators. 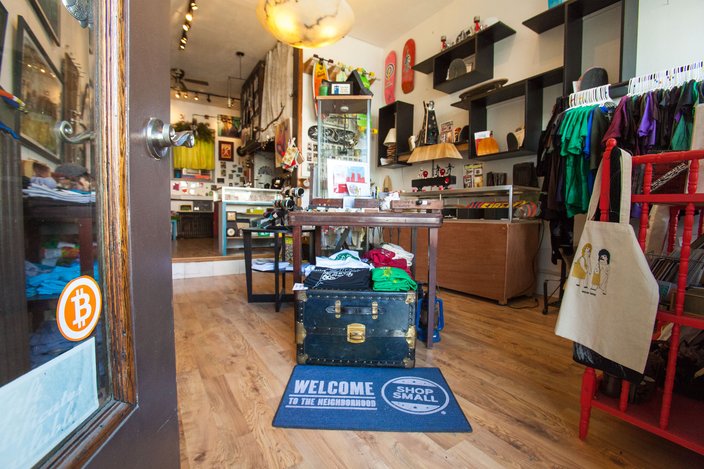 Street Glitter Gallery at 306 E. Girard Avenue in Fishtown is among those Philadelphia businesses that accept Bitcoin as a form of payment. (Thom Carroll / PhillyVoice)

Atlas explained that many people view anonymity as a negative concept. Instead, the focus should be on understanding how Bitcoin works, he said.

"Ideally, how Bitcoin should work is it should be essentially digital cash. Cash is anonymous in many ways," he said. "Bitcoin is kind of somewhere between the dollar cash transation and credit card transaction. It’s not so much to do with anything illicit or scary."

He believes Bitcoin has strong implications for the future of human liberties.

"I’m very much interested in technologies that help us resist unfair censorship," he said. "Finance has been too heavily centered on controls. Bitcoin is the first technology that cannot be shut down by government. I think that what drew me to it was not only the interesting technological qualities of it, but I think it’s going to have a huge impact over the next decade in terms of human freedom all over the world."

Atlas is also the founder of the Open Bitcoin Privacy Project, which aims to improve the privacy of Bitcoin.

"Bitcoin security is starting to get some much-needed love, but I think Bitcoin privacy still needs a shot of adrenaline to get up to par with the legacy systems that Bitcoin will replace," he writes in his blog.

Coinbase, the first regulated U.S.-based Bitcoin exchange, was established in late January. Some argue it may help to legitimize Bitcoin and protect investors.

For an easy-to-follow breakdown of how Bitcoin works, see here, or view the Vox video below.