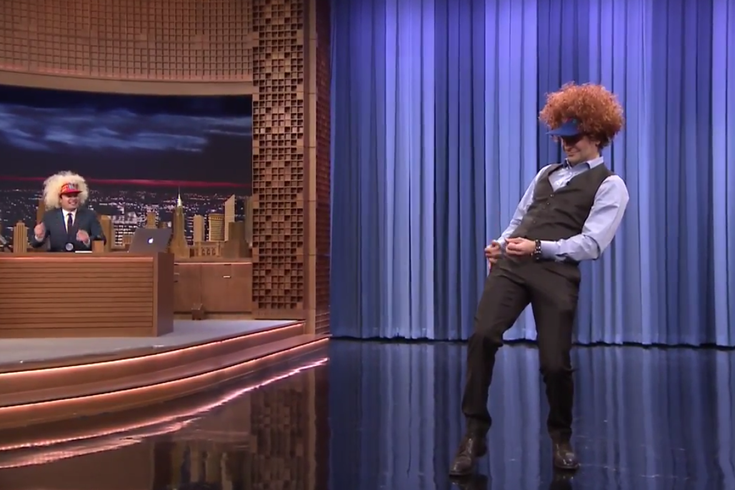 Bradley Cooper mastered the non-art of air-guitar on Jimmy Fallon last night. (Because he's Bradley Cooper, and he can get away with making just about anything seem cool.)

After some chitchat with Fallon about being able to air-strum Neil Young's "Down by the River," Cooper hopped out of the guest seat and into the driver's seat, traipsing about the stage and into the audience as the cameras followed. Cooper said he taught himself to air-guitar to the song as a kid -- so, take just a moment to envision him air-strumming on Broad Street.

Cooper also landed one of seven unique covers for W magazine's February 2015 issue, in which he teases with white suspenders and sports a ghost-chic paleness that one can only hope was a makeup effect.

“I had advantages in making a film about the Iraq war.  On USO tours, I went to bases in the middle of nowhere in enemy territory. I was with the soldiers in their barracks, and I really got a sense of it. And, oddly, I had experience from having starred in The A-Team. I learned how  to shoot guns for that film. After making it, an M-4  felt as comfortable to me as  a tennis racquet.”

See Cooper in all his pasty, half-naked glory, and all other stars (Julianne Moore, Emma Stone, Shailene Woodley, to name a few) from W's Best Performances cover spread here.